Dr. Seuss’ Horton Hears a Who! 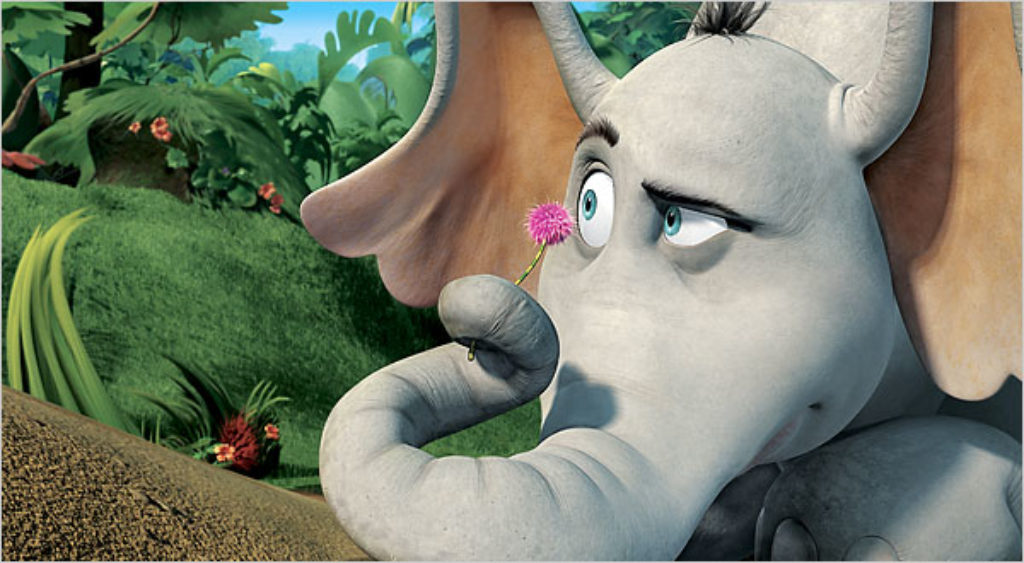 “On the fifteenth of May in the jungle of Nool, in the heat of the day, in the cool of the pool,” and right smack in the middle of page one of Dr. Seuss’ classic book—that’s where this story begins. Horton is a friendly talking elephant whose afternoon swim is interrupted by a speck of dust that floats by and … screams. It’s a tiny scream, but a scream nonetheless. And Horton is awakened to the fact that a whole community of very small folks called Whos live on that speck. Theirs is a peaceful world where no news but good news has ever been heard.

Now the Whos have a problem. They’re not accustomed to floating through the jungle. The fact that their speck has been dislodged from a secure resting place could spell disaster for their tiny world. But they’ve found their salvation in Horton, who takes on the responsibility of carrying the speck—pillowed atop a clover—to a sheltered spot high on Mount Nool. If he succeeds, the peace of Whoville will be restored.

Of course, his quest is not that easy. Enter a grumpy kangaroo—the self-appointed queen of the jungle—who doesn’t believe in Whos. Her disbelief fuels a vendetta against Horton, whom she accuses of poisoning the minds of the jungle children with lies about creatures who don’t exist. She’ll go to any length to dispossess Horton of his clover—and his sense of responsibility toward the Whos.

Horton the movie holds hands with Horton the book in terms of one main theme: “Even though you can’t see them or hear them at all, a person’s a person, no matter how small!” Theodor Seuss Geisel penned this noble premise back in 1954, and the idea of caring for the tiny and powerless is even more meaningful today in the aftermath of Roe v. Wade.

Horton acts as protector and defender of those who can’t protect and defend themselves, even in the face of persecution. At one point, he is given the opportunity to escape ridicule and punishment if he will only deny the Whos’ existence and end his quest to deliver them to a safe home. He refuses to denounce his small friends. Filmmakers import a line from companion Seuss book Horton Hatches the Egg to reinforce his resolve. It reads, “I meant what I said and I said what I meant: An elephant’s faithful, one hundred percent!”

Another theme that is plucked from Seuss’ pages—and elaborated upon—is the idea that each person is vital to the community. At a critical moment, when the Whos need to make their existence known to the larger world, their cries are not heard until the smallest Who joins in the cacophony. That much is the same in the book as in the film. Beyond that, the film delves into this small Who developing his own gifts—not those that others think he should have.

Whoville’s Mayor McDodd (“devoted and fair and a little bit odd”) has 96 daughters and one son. Despite the fact that his quiver—and his singular bathroom—are quite full, the mayor attempts to connect with each child on an individual basis. He doesn’t always succeed, but he keeps trying. His relationship with his son, JoJo, is particularly challenging, as JoJo refuses to talk. The boy’s voluntary muteness is partly due to the pressure he feels from his father to become Whoville’s next mayor. In the end, McDodd ends up affirming his son for who he is. The mayor’s wife states that she believes him even when no one else in town does.

Though God is never mentioned, Horton Hears a Who! explores the concept of faith in a larger—unseen—being. At first, McDodd is the only Who able to communicate with Horton, so the other Whos think the mayor is delusional. Meanwhile, McDodd is trying to wrap his mind around the idea that his whole world fits on a speck of dust atop a flower held by Horton’s trunk. His difficulty in grasping this concept is heightened by the fact that he can’t see Horton.

To his amazement, when he begins factoring in Horton’s presence, McDodd’s own world suddenly makes more sense. When he tries to explain this to his fellow Whovillians, he uses words strangely similar to John 3:8: “Look at the wind! What do you think that means?”

Out in Horton’s world, the kangaroo takes a hard-line naturalist view. “If you can’t see, hear or feel something, it doesn’t exist!” she insists. But her dogmatism is shown to be unfair and motivated by fear of losing control over the other jungle creatures.

A comment is made about the mayor and his wife having been “busy,” since they have so many children.

Carrying around the speck that houses Whoville, Horton quickly learns that “a small bump above [in Horton’s world] is a big bump below [on the speck].” Thus, as Horton makes his way through the jungle, he causes continual earthquakes in Whoville. Many items are broken, and some jolts are scarier than others. No Who is seriously injured by the quakes, but in between them, several Whoizens get slapped by the mayor. One tremor interrupts His Honor’s dental appointment and he’s left with a wildly flopping anesthetized arm instead of a numb jaw. (That deadened limb gets caught in a door at one point.)

The mayor angrily throws a stapler; it bounces back and, um, nails him in the face.

Horton’s adventures include charging a posse of ornery monkeys, being fired upon by their banana shooters and cautiously traversing a rickety rope bridge. (This last feat must have frightened one of the pint-sized viewers with whom I shared a theater, because I overheard a dad say reassuringly, “He’s going to be all right!” while Horton scrambles for safety.) A couple of times, Horton pantomimes fighting invisible enemies and talks trash to them. (“All right, fat boy, you want some of this!?”) Once, he gets hit in the head with a tree branch, and another time he is chased by an angry mob—which proceeds to catch him, cage him, tie him up and poke him.

The kangaroo, for her part, tries to drop the speck into boiling Beezle-Nut oil. Vlad, the nasty eagle bribed by Queen Kangaroo to do away with Horton’s speck, talks about devouring the clover, regurgitating it, then devouring it again. Horton’s friend Morton warns the elephant that if Vlad gets him, he’ll “rip your flesh off.” But when Vlad actually goes after Horton, he doesn’t use either of these methods. Instead, he runs Horton headlong into a cliff (“I break elephant into million pieces!”) and steals the flower.

“Gee,” “Jeez” and “darn.” McDodd and the Whoville town council chairman are fond of calling each other “boob,” “moron” and “idiot.” In one of their arguments (during which audiences can see them but not hear them) the chairman points to McDodd, then to a picture of a donkey’s rear end, with the clear implication that he sees them as one and the same. The mean kangaroo accuses Horton of turning the jungle children into “a bunch of harebrained half-wits” and other such things.

A quick vignette shows a Whoville construction worker relaxing with a martini glass.

The kangaroo’s joey calls his mom “weird.” The mayor’s JoJo, meanwhile, sneaks out of the house after bedtime. One of Horton’s young jungle friends says that she has imagined a world in which everyone “eats rainbows and poops butterflies.” Horton does a dance and shakes his ele-rump, a highly imitable move.

Reading Horton Hears a Who! takes all of seven minutes, so I was curious what filmmakers would do with the story to turn it into a feature-length film. After hearing tales about how Mike Myers’ The Cat in the Hat and Jim Carrey’s How the Grinch Stole Christmas fell flat in more than a few key areas, I was pleasantly surprised by this third stab at a treasured franchise.

Foremost, nobody messed with the pro-life refrain, which anchors the beautifully animated movie as it does the book. To top that off, writers Ken Daurio and Cinco Paul worked pretty hard to add narrative bits in Dr. Seuss’ signature anapestic tetrameter—so the details added to the story sound like they came straight from the book. (If you don’t think that’s quite an accomplishment, try writing your own metered verse sometime!)

Hands down, the addition I was most pleased by was the exploration of faith in things unseen, which gets only a passing mention in the book, but enjoys significant screen time. The interaction between Mayor McDodd and Horton leaves viewers with the distinct impression that faith is not just reasonable, but in this case, makes one more loving and more responsible.

Horton is not a straight allegory, though, with neat connections between every element and a real-life parallel. Sometimes the tables are turned, as with the portrayal of the naturalist kangaroo. Ms. Kangaroo is a preachy, fear-mongering, pedantic control-freak. And she’s the one persecuting Horton, the man, er, pachyderm of faith. Besides, Horton himself is not a perfect God-figure. (Too much bumbling.) And rather than landing hard on the moral of the story, the filmmakers chose to end it with a jungle-friends rendition of REO Speedwagon’s “Can’t Fight This Feeling.” How’s that for lighthearted?

So moviegoers looking for a Sunday school take-home lesson all spelled out and labeled with circles and arrows won’t find it here. But they will be given a chance to engage in meaningful discussion about both faith and responsibility—all because of a lumpy and lovable elephant who’s sure to make parents and kids alike leave the theater waving their trunks and looking around for purple clover to pluck.