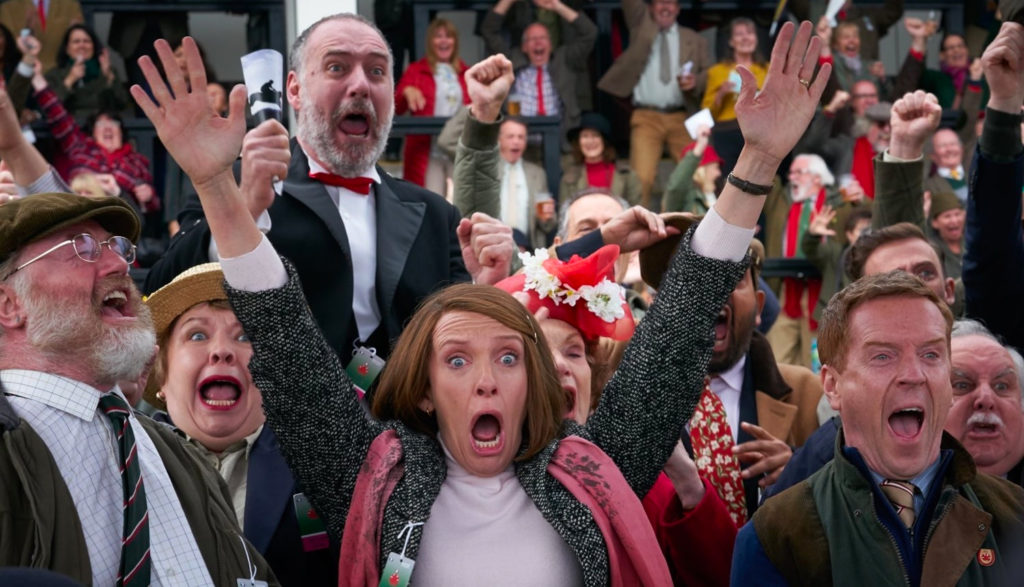 Jan Vokes doesn’t know what to do with her life.

For years, she raced pigeons alongside her dad; her husband, Brian, was a veterinarian. But that was a long time ago. Jan works as a bartender and cashier now. And Brian lost his job after arthritis kicked in.

It’s a dull existence with no variation. Jan wakes up early, works her shift at the supermarket and then goes home to have tea with Brian (who is usually watching vet shows on the telly), then she’s off again to her shift at the pub.

Jan doesn’t just want things to change. She needs them to. She needs a reason to wake up in the morning—something to make her alive.

And she figures out just the thing when Howard Davies comes to the bar for a few drinks with his friends.

Howard used to be part of a racehorse syndicate, a system in which individuals can purchase a share in a horse if they don’t have the funds to own one outright. But between gambling and losing the horse he co-owned, he nearly lost his house. Howard and his wife, Angela, managed to pay their mortgage, but they had to take it out of their children’s college funds. Now, he works paycheck to paycheck as an accountant at a local firm, giving people advice about taxes.

So, Jan suggests they create their own syndicate and breed a racehorse.

It’s not an easy or cheap process, but after putting out fliers around town, Jan and Howard realize they aren’t the only ones looking to be part of something bigger, to better their lives.

Pretty soon they have their syndicate of villagers; and their foal, Dream Alliance, is born.

When Jan forms the syndicate, she warns her friends and neighbors that they are unlikely to ever win any money. If you join, “do it for the hywl,” they’re told (a Welsh term referring to a feeling of emotional motivation and energy). And though they sometimes have to be reminded that they aren’t in it for the cash, they all manage to encourage one another and bond over the purpose and unity that Dream Alliance inspires in each of them.

Because of their boredom with life, Brian and Jan are often inattentive to each other. However, when Jan decides to breed a horse, Brian is the first person to support her dream (even though he has some reservations about it). Furthermore, Dream brings purpose to both of them, and the couple continues to encourage each other.

Even when things look bleak for Dream’s future, Jan never gives up on him. When offered a large amount of money for him, she refuses, and others defend her moral (although technically not legal) right to make decisions about Dream since she has been responsible for breeding and raising him.

Howard and Angela argue when she finds out about the new syndicate, since he lied to her about his involvement. She reminds him that she swore to leave him if he ever joined a racing syndicate again. However, she reneges on this threat and remains by his side, eventually joining him on the racetrack when she realizes that he just doesn’t want to regret his life choices the way his father did.

Jan grows cross with her dad when it appears that he doesn’t care about Dream or the purpose she’s found in raising him. And although they never get the chance to reconcile this particular disagreement, she discovers that her dad actually kept news clippings of all Dream’s races, proving that he did care.

We see a church in the background. There are several headstones engraved with crosses in a cemetery. Someone utters an honest prayer, saying, “Please, God.” A woman crosses her fingers for luck.

There are several crude jokes about sex when horses are breeding, and one person wonders if they should watch the process. There is also some unsavory talk about neutering animals and animals giving birth (and we see one such birth on a television).

A man strips his clothes off in celebration and we see him in nothing but a long undershirt. In another scene, we also see his underwear as his pants fall down, after which he makes a crude remark about his genitals. A few couples kiss and hug. A woman kisses another woman on the cheek (non-sexually).

We learn that Jan got pregnant when she was just 17 and that her dad is still upset with Brian about this. She jokingly says she is having an affair to catch Brian’s attention. People sing a song about a woman having an affair.

Several horses fall while racing, throwing their riders and often getting trampled in the process.

After one particularly nasty plunge, race officials place a tent around an injured horse. We see that the horse’s leg is bleeding and hear that it snapped its tendon. A vet pulls out a gun to put the horse down while waiting to hear if the owners would prefer to operate on the horse or put it out of its misery.

We learn that a mare died while giving birth. A butcher offers to kill a horse for meat.

People drink alcohol throughout the film. Kerby, the town drunk, is intoxicated more often than not and almost gets kicked out of a racing event for trying to sneak alcohol on the premises. He also keeps a jar full of beer money, defaults on his tab at the pub and sprays other people with beer.

Professionals in the racehorse industry are rude to Jan and unwilling to give Dream a chance because Jan and the rest of the syndicate come from a poor village.

There is some toilet humor. People lie, litter and gamble.

“All my life I’ve never been me,” Jan tells Dream Alliance. She’s been a daughter, a mother and a wife. “But watching you race, I’m Jan.”

Before Dream, the individual members of the syndicate were broken people. They’d lost their jobs, their community and their pride. But when Dream came along, he reminded them of what life was like when they weren’t poor. He never asked any of them for anything but somehow gave them all a second chance.

Dream Horse isn’t perfect, as it contains a smattering of profanity and some questionable jokes about sex. There’s also an unfortunate focus on a perpetually inebriated man and his drunken antics (including an event where he strips down to nothing but an undershirt).

However, this inspiring true story shows us all what it’s like to be a part of something bigger than yourself. Jan and her friends never became millionaires from racing Dream. But they found something more important—pride, purpose and a community of people willing to stand together through thick and thin.