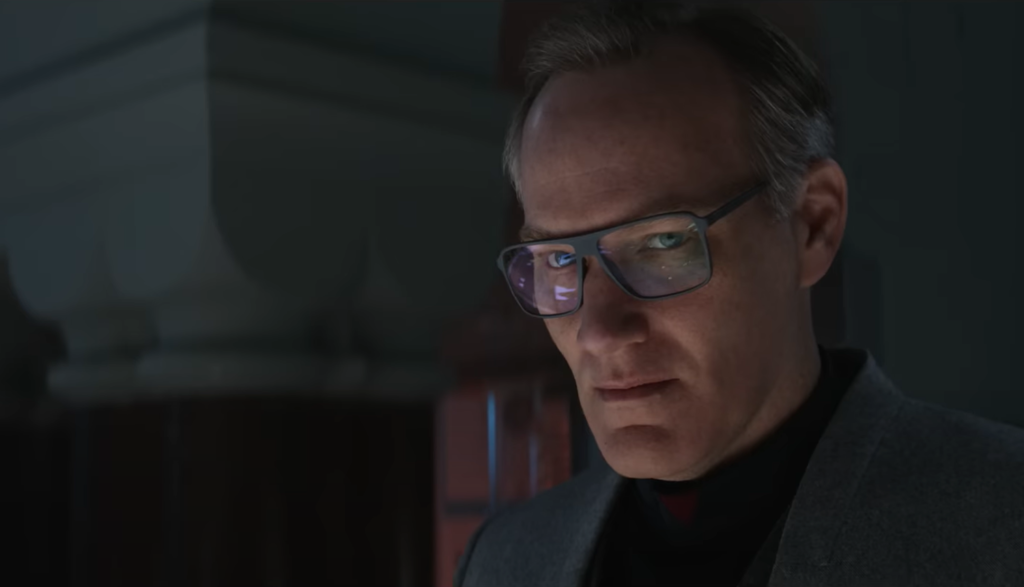 In the Apostle John’s first letter, he writes, “We know that we are from God, and the whole world lies in the power of the evil one (1 John 5:19).

Well, this evil one didn’t get the memo.

In The Devil Conspiracy, Lucifer is in no position to receive memos. Or emails or even emoji-filled texts. For thousands of years, he’s been tethered in the Earth’s fiery, gloomy nether regions. Specifically, chained to a rock, with the chain itself pinned there by the Archangel Michael’s sword.

Oh, make no mistake: Lucifer still has a bit of influence topside. And we can’t forget about his mortal minions. For millennia, those minions have worked to break the devil free and let him fully loose in the world. But their progress has been slow.

Lucifer’s human fanbase now includes a scientist who can take human DNA and create clones of the DNA’s donors. He’s successfully monetized his work, too, cloning the world’s greatest geniuses and auctioning off the resulting infants to the highest bidder. But he and his fellow Satanists have always had their eyes on a bigger goal. They want to clone Jesus Himself.

The Shroud of Turin, the scientist reasons, must have tons of Christ’s DNA, right? All this researcher and his cult need to do is swipe the Shroud, get to cloning and create a human/divine body capable of holding the spirit of Satan himself.

The first part of the plan goes smoothly. An aged (albeit surprisingly spritely) Satanist named Liz breaks into the Shroud’s exhibit area, kills a couple people and makes off with the sacred wrapping. She even kidnaps a young art student, Laura, as the Lucifer’s prospective betrothed. Call it a wicked wedding windfall.

Only two things can foil the Satanists’ nefarious scheme now.

One, the meddling Archangel Michael, who has taken over the corpse of a dead priest to stop the devil in his cloven-hoofed tracks.

Seems like the latter’s a recurring problem for Lucifer, doesn’t it?

So, clearly, The Devil Conspiracy is a mess. But it does come with an odd little nod to motherhood.

Let me explain: We hear parenting experts talk a lot about nature vs. nurture—how much you are who you are because of your genes and how much is dependent on your upbringing. We’d argue that parenting is by far the biggest influence on how a child grows, and who he or she grows up to be.

The movie agrees. turns out, the biggest foil to Satan’s plans is his intended mother, Laura. While the Satanists impregnate Laura with a fetus that’s part Satan, part Jesus (not sure how the science works with that, but we’ll have to roll with it for now), Laura develops a loving bond with her unborn child. Satan is seriously miffed at this development, since love is the antithesis of what he’s all about.

Father Marconi—the doomed priest who loans his body to the Archangel Michael—also seems to be a nice, principled fellow before his passing. Another priest does what he can to help the now-mortal Michael fight the Satanist cabal, even as he gently reminds the angel of his allegiance to God. (More on that in the section below.)

Pre-kidnapping, Laura is just your average American, atheistic art student. Her thesis focuses on using art to illustrate the idea that spiritual forces are a myth and that the fight between good and evil takes place solely (soully?) in the human heart.

After the events in The Devil Conspiracy, I’m pretty sure she’ll become an active churchgoer.

First, let’s hit the film’s positive spiritual elements. The story, outlandish though it may be, stresses the fact that good and evil are quite real and that Satan (despite his posturing to the contrary) is really, really evil. It tells us that God is way more powerful than Satan, and that He’s truly in control—even when it may seem as though He’s not. That makes it more theologically accurate than, say, Supernatural.

But beyond those broad-brush elements, the movie gets pretty muddled.

With his dying breath, Father Marconi essentially invites Michael to take over his body, which Michael does. But Michael does so without God’s authority. “This is my responsibility,” he tells a priest. “I’ll ask for permission later.” Michael himself seems to have a crisis of faith throughout the film, wondering just how God could allow Satan to go free. Indeed, it’s Michael’s insistence on doing things on his own initiative that nearly allows Satan’s demonic minions to fly through a tunnel between hell and Earth.

That tunnel, we’re told, has been sealed for millennia, with a big ol’ city/abbey built around the infernal door so that it can be effectively guarded. But over the years, Satanists have secretly taken over the whole works. And once Satan is born and the gate is opened, those Satanists plan to blow the tunnel up to prevent Satan and his legions from ever being sent there again. (Why the God-fearing folks who guarded the tunnel all those years didn’t blow the tunnel up themselves is something of a mystery. Also, why the Satanists didn’t just open the tunnel door when they took over? It’s opened by a simple gear system, after all.)

Oddly, hell itself is populated by not just fallen angels, but innocent mortals. Why are they there? Who knows! But it might be that they were, um, given to Satan for some sort of “come-back-to-Earth” purpose (before Satanists landed on the whole DNA clone thing). Michael promises to return them to Earth proper, and so he does.

We see pictures and sculptures of angels and demons and hear about prophecies of Satan returning to Earth. Those prophecies apparently involve two “beasts,” one  who is a woman (apparently Liz) and the other something called “the Beast of the Ground.” The film’s makers may have intended some sort of connection with Babylon and the beast she rides in the book of Revelation, but the movie’s beast may be more inspired by the Islamic “Beast of the Earth,” which is considered one of the signs of the Last Day. But given the film’s theological depth otherwise, perhaps that’s giving it too much credit: The beast we see might be just the product of an extra costume found in the studio’s wardrobe department.

One more word about the Shroud of Turin. While in real life, people debate whether the Shroud is authentic, there’s no such doubt in the movie. Everyone, from scientists to Satanists to secular news reporters, accept it as real, and Father Marconi tells Laura that the Shroud’s image was created by the light emanating from Christ’s body. It is, he explains, a “photograph” of Jesus.

The scientist’s DNA cloning business is represented with an upside-down triangle—likely serving as an infernal echo of the symbol of the Trinity.

Laura is one of four prospective “brides” for Lucifer, and she’s held captive in a communal glass cell. When one woman wonders why they were taken, another (dressed in goth garb and fishnet stockings) darkly says, “Sex. It’s always sex. And then they kill us.”

Laura later says that she was “raped,” though the interaction we see between her and Satan (and others) is more that of a smoky tentacle entering the victims’ mouths.

Laura’s art professor turns down her dissertation proposal, but he says that he might reconsider if she visits his apartment later. (Laura turns him down.) Liz expresses her desire for Lucifer to “be inside” her, which could be at least a partly sexual wish. She can seem jealous of Laura for attracting Satan’s intentions.

The “Beast of the Ground” totes around a chain with a sharp thingy at its end, and he uses it to slaughter countless people (part of an unholy baptism, we’re told). Arms and legs are sliced off, as are parts of heads. Torsos are lethally ripped open, spilling blood (but no obvious innards).

Someone stomps on a guard’s head repeatedly, killing him. Another victim is killed off camera, and his very bloody corpse is thrust into a window.

Michael’s “Sword of the Spirit” is used to kill a fallen angel or two. Liz uses a man-made sculpture of the sword to kill a couple of people. (One victim has his head cut off, while the other is stabbed in the chest.) Michael, in the body of Father Marconi, brandishes and fires several different guns. People are shot.

People, demons, angels and monsters fight, throwing plenty of punches and kicks. People fall (or almost fall) from dizzying heights. Someone is choked. Characters die through supernatural means. Explosions explode. Laura drinks what appears to be bleach in an effort to kill her unborn child. A possessed, pregnant Laura stands over Father Marconi/Michael as her water breaks: The amniotic fluid is apparently acidic, and Marconi/Michael scream(s) in pain. We see some very disturbing ultrasounds and in utero depictions of Laura’s baby.

Shortly after Laura drinks bleach, she vomits some of it but saves plenty more to upchuck all over Liz.

An infant (a clone of Leonardo da Vinci) is auctioned off at a posh gathering. We don’t hear the winning bid, but we know it reached 90 million euros.

The Devil Conspiracy is dark.

I mean that literally. Outside scenes all look like they were shot an hour before sunrise. Interior scenes seem to be illuminated by the equivalent of digital alarm clocks. The film’s so shadowed and inky that it can be almost impossible for a conscientious movie reviewer to see exactly what’s going on.

Perhaps my theater sported a particularly dim projector. Or, more likely, the filmmakers were doing their best to conceal some rather ill-considered special effects. But regardless, there could be technically even more content than I tabulated here. I just, literally, might not have seen it.

But this movie’s dark in other ways that are equally as obvious. While The Devil Conspiracy seems to have been written with an eye toward undergirding the primacy and authority of God, the film nevertheless lands in a spiritual tar pit, pulled down by content concerns and mired in its own extravagantly inconsistent theology.

Admittedly, we’ve got to give the film credit for its audacity. It’s not every movie where a dead, possessed priest fights a creature straight from a 1970s-era Doctor Who episode. Still, if you’re looking for a good Christian movie, or a good horror flick, or even a movie that is associated with the word good at all, this is one I think you can safely pass by.