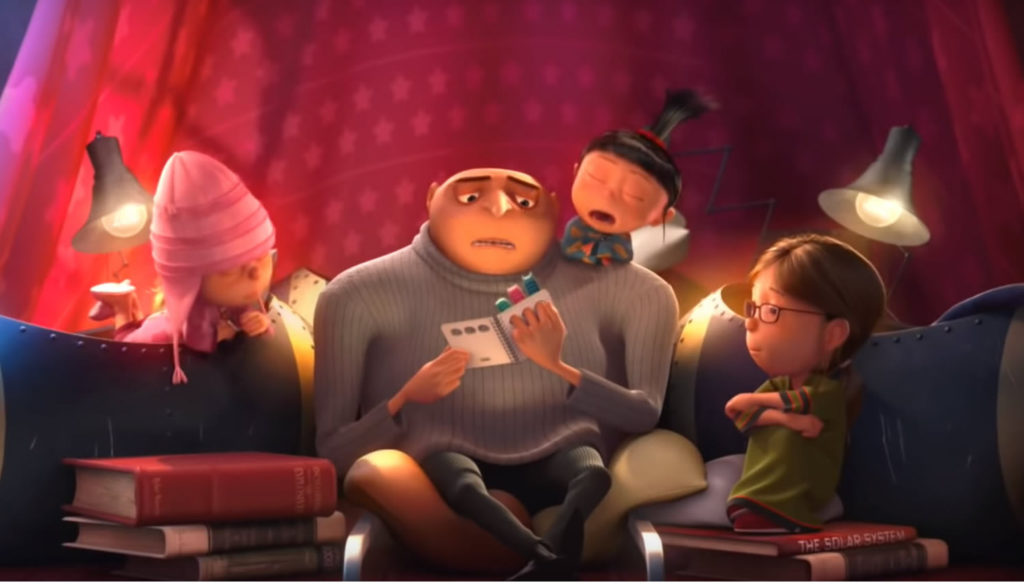 If you look like Uncle Fester’s evil twin brother, sound like Boris Badenov coming off of a wicked cold, and sport a name like Gru, you’re probably going to be limited in your job choices. But that isn’t really a problem for Despicable Me’s protagonist bad guy. All Gru ever really wanted was to be history’s No. 1 supervillain. So all that other stuff fits pretty well.

There was a time when an innocent version of the despicable guy imagined himself as an astronaut, but his impossible-to-please mother set those silly dreams aright with: “You’re too late, son, NASA isn’t sending up monkeys anymore.”

Besides, Gru has natural gifts that are just the right fit for the megalomaniacal meanie biz. He’s great at dreaming up or stealing really cool gadgets. He’s a whiz at devising nefarious schemes. And this guy is a real minion magnet. In fact, his army of florescent yellow henchmen—each looking like a goggled cross between a Twinkie and a peeled Mr. Potato Head—are the envy of all evildom.

There’s only one problem. Gru’s heists haven’t really won him the fame he expected. In fact, they seem kind of lame compared to an up-and-coming rival villain’s recent theft of the Great Pyramid of Giza. So Gru decides to up his game and shoot for the moon.

Snatching the moon and stashing it in his trophy room, however, isn’t as easy as it sounds. You need financing for a spaceship. And you have to find a serviceable shrink-ray. Oh, the travails of a mega-villain. But Gru is up to it.

Step one of his genius plan is to adopt three cute cookie-selling orphan sisters to infiltrate his rival’s lair. That seemingly simple machination, though, ends up dropping some bombs Gru wasn’t expecting. For one, his young but strong-headed charges aren’t as easily pliable as he had hoped. For another, as evil to the core as he wants to think he is, Gru actually starts to—gulp!—care for these sugar-and-spice sweeties.

This animated flick starts out focused on villainous deeds, but it quickly becomes a yarn about heroic choices and the life-changing impact of love and family. At the heart of that transition are the aforementioned orphans who desperately long to have a family of their own. When Gru shows up to ostensibly fulfill that desire, however, Margo and Edith are a little hesitant. Could this odd-looking guy actually be a good father to their needy brood? Young Agnes, on the other hand, grabs his leg with delight and never looks back. In fact, her childlike joy at having a real daddy eventually impacts nearly everything and everybody in Gru’s world.

Gru fights that for a while. The supervillain wannabe initially wants to just use the girls for his own world-dominating plans and be rid of them. And the girl’s insistence that he take them to ballet class, ride roller coasters and read them bedtime stories pretty much drives him crazy. But their continued interactions soften Gru’s calcified heart and cause him to realize that he’s far better suited to being a super dad than super bad.

[Spoiler Warning] At one point Gru sends the girls back to the orphanage—then recognizes that it was “the worst mistake I ever made.” He reaches out to a frightened and endangered Margo, promising, “I will catch you and I will never let go.” Later, Gru and the girls express their love for each other. And even the minions line up for good-night kisses. Gru’s constantly browbeating mom comes around, too, and praises her son for the father he’s become.

When Gru loses all his financial backing, the girls unselfishly offer up their piggy bank. And the minions follow the giving example.

The girls say their bedtime prayers at the orphanage. A quick sight gag involves lycanthropy. …

When Gru shrinks the moon, a howling wolf back on Earth instantly transforms back into a naked man (who’s hidden from the waist down by night shadows). During the credits, Gru dances, shaking and grabbing his backside. His rival does much the same.

For all of the potential blow-’em-up “evil villainy” at the movie’s core, Three Stooges-style roughhousing is more the rule of thumb here. While trying to break into his rival’s fortress, for instance, Gru is pummeled by face-blackening missiles, he dodges swirling saw blades and gets thumped in the crotch. The childlike minions get in on the act as they shove, slap or punch one another like errant schoolboys. (Unlike the Stooges, though, these little head-knockers substitute an occasional missile launcher in place of the eye-poke.)

A boy falls from a tall wooden ramp. (He’s OK.) Gru uses a giant laser to blow up a carnival booth. And he makes beds out of bombs for his little charges. (He stresses that they’re “highly unlikely” to blow up.) He has a nasty dog with razor-sharp teeth who’s perpetually at the ready to chomp on any hand, arm or leg that might be in the vicinity. (Although the vicious mutt is terrified of little Agnes who dresses him in pink frills.)

Edith innocently wanders into a spike-filled Iron Maiden and when the torture device slams shut something that appears to be blood dribbles out. (It’s only a punctured juice box.) When Gru cooks up some pancakes for his girls he makes them in the shapes of knives and corpses. Edith picks up a ray gun and accidentally disintegrates her little sister’s doll.

“Oh my gosh,” “oh, poop” and “he’s gonna kick your butt” are among the villainous statements.

After a dastardly theft, people move to protect other national monuments—including a man who stands guard in front of a giant beer can.

Agnes holds her breath to get her way and passes out. Gru uses a freeze ray to immobilize other customers and make his way to the front of a coffee line. Gru’s mom show’s the girls a picture of baby Gru on his tummy with a bare backside. “Look at his little buns,” she coos.

The orphanage supervisor locks kids in a cardboard box (labeled the “Box of Shame”) if they don’t sell enough cookies to support the school. When Gru first meets this woman he tells her, in Spanish, that she has the face of a burro.

When Gru brings his newly adopted girls home he shows them a food bowl on the floor they can call their own and a cat box-like spot labeled “pee-pee and poo-poo.” Dr. Nefario, Gru’s elderly inventor sidekick, mishears his boss’s request for a “dart gun” and comes up with a gaseous substitute.

During a tumbling mishap, Gru’s minions grab for him and strip him of his pants—suspending him by the seat of his boxer shorts. The girls jokingly insert a drawing of Gru sitting on the toilet into Gru’s master-plan layout. A few minions photocopy pictures of their backsides.

You’ve heard us expound on the point before, but isn’t it crazy how fast things are changing in the filmmaking world? Just think of the increasing number of animated film studios that are actually raising the bar when it comes to production quality and the creation of character-driven, family-friendly storylines—as compared to the many live-action production houses that appear to be somewhat clueless.

Last year, Time magazine film critic Richard Corliss went so far as to say that 2009 was a far better year for animated film—with the likes of Up, The Princess and the Frog and Fantastic Mr. Fox—than it was for non-animated fare. And with pics such as the playful Viking voyage How to Train Your Dragon and Pixar’s endearing Toy Story 3 having hit this year’s marquees, 2010 is showing quite a bit of promise as well.

That’s not to say all new animation is created equal. Despicable Me, the first effort from Universal’s Illumination Entertainment, starts a little slow. And I think the few toilet gags on hand should have been left on the cutting room floor. But by the time Gru starts rethinking his villainous ways and contemplating whether life wouldn’t be better with some childish wonder in it, I was hooked.

Then the joys of family win the day. And the reformed “bad guy” finds his greatest accomplishment in uniquely voicing love for his newly adopted clan. And I found myself nodding my head and wiping away a secretive tear right along with all the other kids and parents in my row at the theater.

So does Despicable Me, with its comedic boo-and-hiss minion action, Steve Carell-voiced not-so-bad-guy and pint-sized adorable heroines, add more momentum to the smile-worthy animation trend?