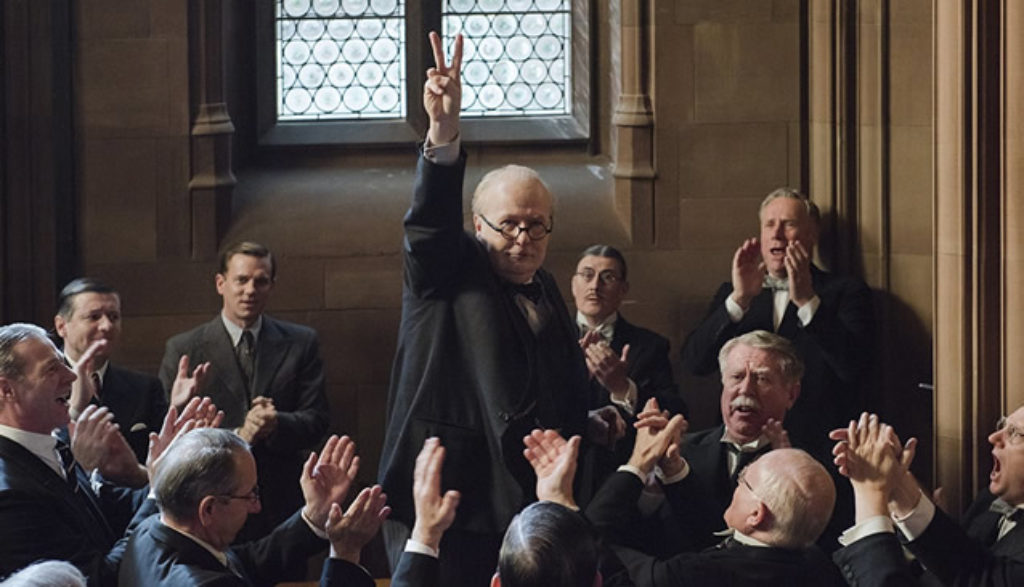 We know that, of course. Most of us have known that for so long that we might as well have been born with that knowledge, like the way salmon instinctively know the way home. Germany’s failure is so deeply ingrained in us that Nazis have become shorthand for flat-out villainy and Hitler’s become a cartoon nemesis.

We forget that there was nothing cartoonlike about him.

It’s May, 1940. Hitler’s armies slice through Western Europe’s proudest nations like a scythe. Holland falls. Belgium surrenders. France teeters. Hitler needs only to exhale to blow Paris down. The British army stands surrounded on a small French beach near Dunkirk.

“How many of them are trapped?” asks Winston Churchill, Britain’s new prime minister.

Britain’s allies are gone or going. The United States, the island nation’s great, shining hope, remains stubbornly neutral. Hitler’s forces advance inexorably, as if fortified by some infernal power. Many believe that England—a country that’s not been invaded for nearly a thousand years—may be watching its last days unfurl.

It’s hopeless, some in Parliament suggest. Ask for terms. Make peace. Save what we can of our great nation. Save it while we can. To resist—to fight on—is not only misguided, they say. It is insane.

Spoiler warning: Where there’s life, the outcome is never certain. Defeat can become victory through grit and faith and hope, as long as we never surrender.

The Winston Churchill we see in Darkest Hour is no exemplary standard of virtue. He has plenty of faults, as we shall see. Even his political career has its share of blemishes. But now, all these years later, few question that he was exactly the sort of leader that Britain needed during World War II. He combined a unique linguistic grace and power with a sheer, stubborn will that still undergirds how the British like to see themselves.

But unlike Britain in 1940, Churchill himself never stood alone. His wife, Clementine, stood beside him, offering love, encouragement and often advice. When he grew older and more snappish, Clementine exhorted him to be “more kind.” “I want others to love and respect you, as I do,” she tells him. She and her family always knew they took a back seat to Churchill’s political career. But when he climbs to the pinnacle of British power, she offers him a toast: “Our small sacrifice was for a far, far greater good.”

After a rocky beginning, King George VI becomes a firm Churchill ally, too. He admits that some in the government likely dreaded Churchill’s assumption to the country’s highest political office, but that “None dreaded it, none, like Adolph Hitler.”

Churchill was also bolstered by the character and gumption of the British people themselves, embodied especially by Elizabeth Layton, Churchill’s private secretary.

We should also note that while Churchill’s political opponents were wrong in wanting to seek terms from Germany, their motives were understandable and perhaps even, in some way, laudable. Neville Chamberlain, whom Churchill replaced as prime minister, as well as the ambitious Earl of Halifax, both sought peace in order to save lives and preserve what they could of Britain’s independence and culture. They believed it was better to save what they could than chuck the whole works away, as (they thought) Churchill was doing.

Darkest Hour isn’t a particularly religious movie, but we do see various nods to faith throughout. Halifax says of Churchill, “God made him incapable of even pronouncing the word peace.” Churchill himself references God a few times in his speeches. He describes his own father as being “like God: busy elsewhere.” When Churchill calls an admiral in the middle of the night asking for a favor, the admiral tells Churchill that he was still awake, reading his Bible (a lie). Churchill says that it’d be a miracle if more than 10% of their army is able to safely evacuate from Dunkirk.

Churchill tells King George that his mother was very glamorous; but he also suggests—giving the king a knowing look—that she was “perhaps too much loved.” We learn that Churchill’s father went insane due to syphilis.

Churchill dictates to Elizabeth from pretty much everywhere—including his bathtub. She sits outside the bathroom, taking down his missives that he hollers through the shut door, when he suddenly announces that he’s “coming out in a state of nature.” She quickly scurries down the stairs before he exits the bathroom: The only things we see of him, though, are his feet and pasty-white calves.

Though Darkest Hour deals intimately with war, we see precious little of it. A dead man’s eye reflects several bombs being dropped, which explode in blooms of fire. We witness British soldiers desperately holed up, many of them injured. Some scream, others sport bloody bandages.

We hear about the desperate situation in Dunkirk, where 300,000 men are stranded. Churchill orders a unit of 4,000 men in Calais, France—just outside the Dunkirk encirclement—to engage the surrounding German armies in a desperate attempt to distract them long enough for a portion of the British army to be evacuated; it’s a mission someone on Churchill’s war council categorizes as “suicide.” He’s pretty much right: We later hear that the Calais regiment is in turn surrounded and being brutally bombarded by the Germans, with the unit suffering 60% casualties.

We hear four uses of the word “d–n,” once paired with God’s name. (God’s name is misused one other time, too.) British vulgarities “bloody and “bugger” are also used with some frequency. Churchill angrily calls his secretary a “nincompoop.”

When Churchill first flashes his famous “V” for victory sign, he does so with the outside of his hand facing toward the camera. Elizabeth later blushingly informs Churchill that the sign has a different meaning in some of the “poorer quarters” of London: “up the bum.” Churchill laughs heartily at his faux pas.

Churchill drank a lot—both in real life and in this movie. His political opponents accused him of being a “drunkard,” and they weren’t far off. He usually starts his day with scotch; he drinks champagne with his lunch and dinner; and he and concludes his day with port or brandy.

“How do you manage to drink during the day?” an appalled King George asks Churchill as a servant pours the prime minister another glass of champagne.

He was rarely without his trademark cigar, either. We see Churchill lighting and smoking them often. He uses them, too: He takes his time lighting one, forcing a political rival to wait. When he rides the London Underground, he asks for a match—breaking the ice with his fellow travelers and inviting them to converse with him. And when Clementine tells Churchill that they’re very nearly broke, Churchill promises to economize by cutting back to “four cigars a day.”

Other people drink and smoke as well. King George notably smokes cigarettes here (and famously died of lung cancer later, in real life). Churchill’s family toasts with champagne (with one of Churchill’s young sons downing his glass before the toast is over).

We see Churchill exit a privy, making a suitable quip as he does so. He sits in a water closet to make a private call to U.S. President Franklin D. Roosevelt.

During a radio address, Churchill lies to the people of Britain to keep their spirits up. His wife approves, telling him “there’s time enough for the truth.” But King George reprimands him. “The public needs to be led, not misled.” We hear a lot about how Churchill is enamored with the sound of his own voice—a not altogether unfair criticism.

We live in complex, fractious times. Our country—our world, really—has never felt quite so divided or, in some ways, so dangerous.

Not since World War II, at any rate.

The world was divided then, too, but it was a cleaner divide. The good guys and bad guys were pretty easy to distinguish. As such we felt more able to unite, to stand firm against a shared, obvious adversary. We knew what we had to do.

But Darkest Hour tells us that the British didn’t know in that crucial historical moment. Not even Churchill, Nazism’s most fervent foe, was certain that “never surrender” was the right way to go. Forces from every side—and even pure, simple logic—gave him plenty of cause to have second thoughts. There’s no historical proof that the real Churchill ever considered asking Germany for terms. But in this movie, he comes quite close indeed.

There’s a certain irony that, as Britain stood alone against Nazism, Churchill found the courage to stand through community. King George tells him that he’ll support Churchill, even if he chooses to risk the island’s destruction. His wife, Clementine, encourages him in his moment of doubt: “You are strong because you are imperfect,” she tells him. “You are wise because you have doubt.” And then, when he asks regular Londoners on the Tube what they would think about considering making peace with Hitler’s Germany, their answer is unequivocal.

His country inspired him. And so, in turn, he inspired it. There’s a lesson in there, methinks.

How fitting it is that Darkest Hour was released the same year as Christopher Nolan’s Dunkirk—so much so that, in some ways, these movies could be watched as a seamless pair. Both take perhaps the most inspirational defeat in history and give it life and blood, also challenging viewers to never surrender.

Darkest Hour gives us the political side of the coin and is, as such, a little more prosaic than Nolan’s epic war movie. But this film also sports less profanity and blood, making it a bit more family friendly. Add to that some fantastic performances—most especially by an almost unrecognizable Gary Oldman as Churchill—and you’ve got a strong, inspirational movie on your hands. Put it all together and you’ve got an irony on your hands, too: Darkest Hour shines.