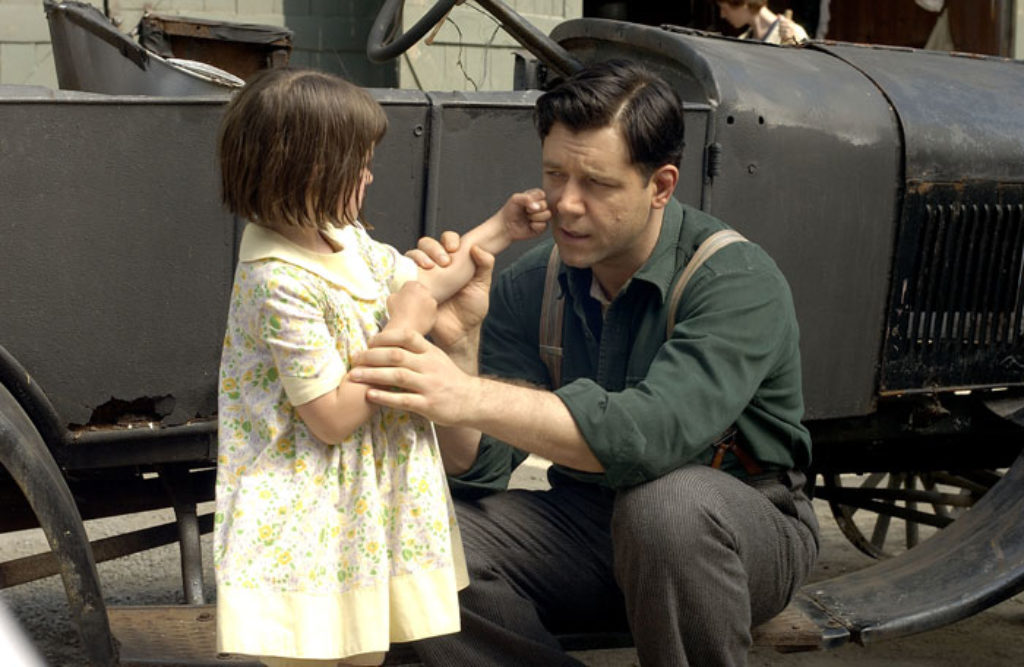 Life is good for James J. Braddock in the Roaring ’20s. Earnings (and wins) come easy for this professional boxer. More importantly to him, he has a wonderful wife and three beautiful children to enjoy.

But by 1933—in the thick of the Great Depression—Jim’s world looks completely different. After being forced into retirement via a string of losing decisions and a broken hand, “The Bulldog of Bergen” has all but lost his boxing bite and is scrambling for work alongside 15 million other unemployed Americans. His only hope each day is that he’ll be picked to work on the docks for a day’s pay. But despite the threat of having no electricity, heat or food for the family, Jim refuses to send his kids off to live with wealthier relatives, even after his wife, Mae, suggests the move.

Jim finally gets a break when his boxing manager, Joe Gould, shows up out of the blue with a proposition. It turns out the No. 2 heavyweight in the world needs a last-minute replacement to fight for $250. And the fact that Jim has never been knocked out makes him an attractive story line. Donning makeshift gloves and a fighter’s robe with the wrong name on it, Jim is simply expected to show up, take a few hits and collect his paycheck.

But then the unexpected happens: Jim KOs his opponent. Having seen glimpses of his fighter’s old self, Joe offers Jim another shot in the ring (much to the chagrin of the ever-supportive Mae). One victory leads to another … and another … and another … until Jim has suddenly rekindled hope among the down-and-out Irish-American community rallying around its newfound underdog hero.

Reality hits soon enough, as it’s bound to do. Jim, now dubbed the “Cinderella Man,” is lined up to fight the undefeated heavyweight champion of the world, Max Baer, an arrogant giant who has already killed two men in the ring. And Mae is finally putting her foot down.

Both Jim and Mae stand for integrity, perseverance, commitment, honor … the list goes on. It’s rare that such positive leading characters remain untainted throughout a film, yet the couple defies the odds. Their love for each other and for their children is at the forefront of their story, which includes numerous examples of solid parenting.

In a touching scene, Jim sacrifices his own meager portion of food when his daughter says she’s still hungry. After his son steals salami from the local butcher, Jim makes him return it and apologize to the storeowner. Despite the family’s obvious need for food, the dad’s message is clear: “We don’t steal, no matter what. … There are a lot of people worse off than us.” In a wonderful display of unconditional love, however, Jim discovers the fear behind his son’s actions and comforts him by promising to never send him away. He repeatedly makes good on that guarantee despite various pressures.

In the interest of his struggling family, Jim humbles himself and asks for help from friends and acquaintances. He’s also loyal to his word. When he’s forced to apply for federal emergency relief money, he returns later to pay back his loan—an action many people consider foolish and unnecessary since they claim the American government betrayed them. Jim never assigns blame or gets bitter toward the government. The boxer also defends a woman when her drunken husband treats her roughly and even reprimands Joe for speaking disrespectfully about an opponent.

Mae is just as admirable as her husband. While she refuses to attend Jim’s fights in an effort to keep herself emotionally stable (“Every time you get hit, feels like I’m getting hit”), she is quick to stand by her man with moving words of encouragement, gratitude and honor. “You’re your kids’ hero. … You are the champion of my heart,” she tells him before a key bout. She also defends her husband in the face of would-be manipulators and attackers, even verbally confronting the intimidating Max Baer after his trash-talking turns personal. And when it comes to her kids, Mae does whatever she can to assure them of a hopeful future.

Jim and Mae’s relationship is a beautiful portrayal of a deep-rooted marriage. Both acknowledge their healthy dependence on each other (“You can’t win without me behind you,” Mae says—to which Jim lovingly replies, “That’s what I’ve been trying to tell you”). Jim goes out of his way to commend his wife, both in public and private.

When everyone else has given up on Jim, Joe shows his loyalty by giving his client/friend a second chance at his own expense. He helps the fighter in his time of need, providing him both money and the opportunity to pursue his passion once again. Another man sticks up for Jim when the boxer’s ability to work the docks is questioned because of his broken hand. Jim later returns the favor.

A priest prays at a funeral. Another is shown thanking God after a boxing match. The Braddocks have close ties to one local priest who leads a congregation that gathers at the church to pray for Jim and listen to his fight on the radio. (Several shots include the priest pacing the floor with rosary beads in hand, complete with the crucifix in the background.) Mae momentarily joins the crowd, making the sign of the cross before entering the church.

During another scene, Mae thanks God for the family’s blessings but is interrupted by Jim, who refuses to join her (“I’m all prayed out”). Later, she admits to previously going to church and praying for him to get injured just enough that he would quit boxing and avoid getting seriously hurt. Jim wears a cross necklace, and another cross is seen on the wall at the family’s house.

Playboy Max Baer is shown in a bedroom with two women. (It’s insinuated that he’s fooling around.) During his fight with Jim, he taunts his opponent with several suggestive comments regarding Mae. Joe returns the verbal jab with a homosexual barb. Mae and her husband kiss passionately on various occasions.

As expected in a movie about a boxer, Cinderella Man is full of punches—hard punches. Whether it’s with an uppercut shown in slow motion or the thud of a grimace-inducing shot to the ribs, director Ron Howard makes sure viewers really feel every landed blow. And for reality’s sake, he tosses in plenty of bloodied noses, split eyebrows, swollen eyes and an occasional broken bone.

With adrenaline flowing in the heat of a battle, Joe tells Jim to beat his opponent from the inside out, instructing him to “fill his face with blood” by breaking his nose. (The fight is so bloody it causes women sitting ringside to turn their heads.) Prior to Jim’s fight with Max Baer, the event’s promoter shows film of the two boxers killed in the ring by the world champ. As he, Joe and Jim graphically discuss how one casualty died, we see the fatal blows replayed in slow motion over and over again. The climactic bout includes yet more blood and a couple of dirty shots to the groin.

Police are shown beating a protestor with sticks, while another man is said to be trampled in a riot.

God’s name is used as an interjection and as a profanity (combined with “d–n”) more than a dozen times. Jesus’ name is misused more times than that. A few s-words are joined by 50-plus milder profanities, including vulgar uses of “a–hole” and other crude sexual terms.

On a couple of occasions the camera takes us to local bars during Jim’s fights, where hordes of fans have gathered to listen to the radio broadcasts. Jim and a friend go to a bar to converse over beers. His pal later shows up drunk at a birthday party for a child, where men are shown drinking and smoking.

Jim and Mae drink brandy on a romantic evening. Max sends Jim a bottle of champagne at a restaurant, and several people drink during the scene. When Jim appears too relaxed before a big fight, Joe asks if he’s been drinking. (He hasn’t.)

A man mentions betting on a fight, as does Jim in a joking manner.

Ron Howard has done it again. Sure, some critics call him the King of Sap and the Butcher of All Stories Real. But with outstanding performances from a trio of premium actors, he’s brought yet another true story to the big screen, loaded it with both tear-jerking and heart-swelling moments, packed it with honorable leading characters and artistically conveyed some wonderful morals. And, for the most part, he hasn’t veered too far from the truth. In short, Cinderella Man is as powerful as its hero’s punches.

It’s powerful in its portrayal of family. Jim Braddock is determined to beat the odds, not because he wants personal glory but because he can’t bear the thought of breaking up his family. With $5 to his name, he calls himself a rich man simply because he has a happy, healthy family.

It’s powerful through Jim and Mae’s seasoned love, her unwavering support and strength (you wonder who’s the stronger of the two), the loyalty between Jim and Joe, and the hope Jim mustered in thousands of Americans. “People ready to throw in the towel are given inspiration,” is the way Joe puts it.

Cinderella Man is also powerful in its grittiness. Though you’re bound to expect a little in-the-ring violence, the movie pulls no punches when it comes to letting you feel, see, hear and virtually smell the action. And Howard opts for the same realism in the language department, allowing Joe to provide the quotient of boxing-typical profanities. Drinking and smoking also get heavy screen time as social norms in this Irish-American community.

You could argue that it’s impossible to portray a boxing flick set in New York during the ’20s and ’30s without these true-to-life elements. And that’s a point that has some merit, especially considering the brutish surroundings of the sport. But it doesn’t make it any easier to endure the blows the film deals out—especially the heavy-handed, unnecessary abuses of God’s and Jesus’ names.