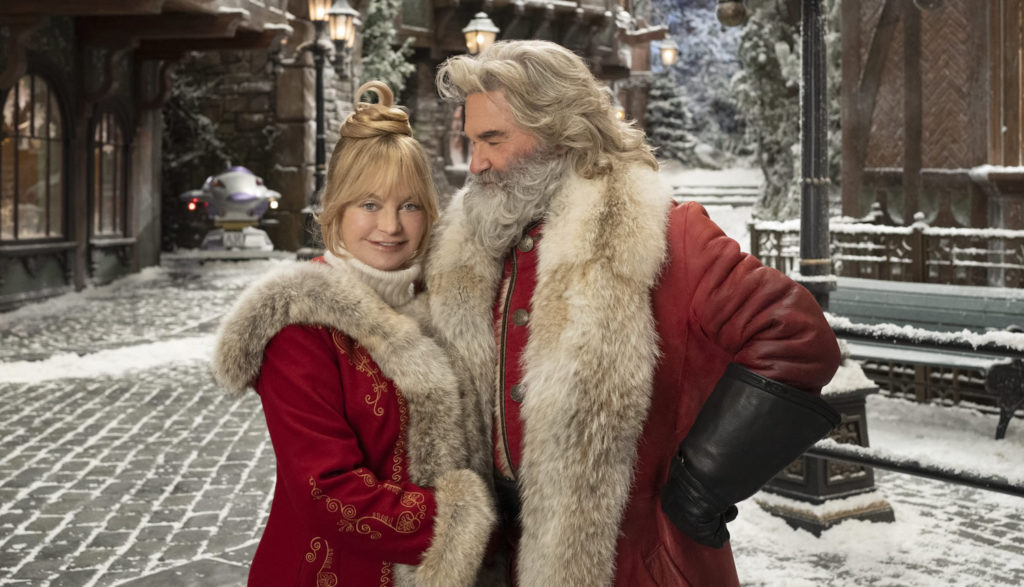 It’s been a couple of years since Kate and Teddy Pierce met Santa and saved Christmas (after they nearly destroyed it, of course). Now, the family is doing a lot better. Their mom, Claire, is on the verge of getting engaged, Teddy’s cleaned up his act, and Kate’s managed to bring up her Spanish grades.

However, Kate’s a teenager now, and she’s none too thrilled about her mom’s impending engagement. Sure, Bob makes Claire happy, but Kate thinks it’s too soon for someone to swoop in and replace her dad.

So, Kate makes a little last-minute Christmas wish for Santa to help her run away. She gets her wish—although not quite in the way she expected.

You see, Belsnickel, a former elf of Santa and Mrs. Claus, wants revenge on the jolly old couple for ruining his life. And he uses Kate as his ticket back into the North Pole so he can wreak all sorts of havoc upon Santa’s Village.

Once again, it’s up to Kate to help Santa save Christmas.

Kate is irritated by Bob’s presence (and even rude to him at times). She feels like her mom and brother are trying to replace her dad too quickly and resents the fact that Bob took the family to the tropics for Christmas.

However, she eventually learns that Christmas isn’t about where you are but who you’re with. And running away from your problems doesn’t solve them. She realizes that just because her family isn’t continually grieving her dad’s death anymore doesn’t mean they’ve forgotten him. She also gradually accepts that Bob isn’t trying to replace him.

Newcomer Jack (Bob’s son who accidentally got transported to the North Pole with Kate) is frightened of many things. Ever since his own mom died, life has been hard for him. But Mrs. Claus asks him to be her “hero”—something his mom used to say to him. Through Mrs. Claus’ encouragement, Jack learns how to be brave again and plays a crucial role in saving the North Pole from Belsnickel’s schemes.

Belsnickel felt betrayed by the Clauses. He thought that they cared more about billions of children around the world than they cared about him. Because of that, he’s developed a hardhearted hatred for humans, and he wants to ruin Christmas for everyone with his plans for revenge.

But the Clauses never stopped loving him, and they certainly never wanted Belsnickel to run away. They beg him to put aside his jealousy and greed, and they ask him to return home to the family that still loves him unconditionally.

[Spoiler Warning] At first, Belsnickel doesn’t believe them. But when they persist in asking him to come home even after all of his bad behavior (and nearly destroying Christmas), Belsnickel finally realizes that it was only his own stubbornness that was keeping him away. He adjusts his attitude and selfish actions and returns to the North Pole.

Much like The Christmas Chronicles, Santa (as well as Mrs. Claus) uses magical powers to help bring joy to people all around the world. And while the source of their powers is never really specified, we do learn a bit about Santa’s origins.

St. Nicholas, we learn, was a bishop in Turkey who discovered the joy of giving. The elves living there were hunted by humans for their magical powers. But recognizing Nick’s generous spirit, they recruited him to channel the Star of Bethlehem and lead them to a new home.

The elves forge a container for the star’s energy and perform a ritual to summon its power—power that is then used to create the “veil of borealis” that covers Santa’s village and protects it from everything outside.

Once again, we also repeatedly hear about the importance of “Christmas spirit.” And as Kristin Smith wrote in her review of the original film, this sequel likewise suggests that “having ‘Christmas spirit’ results in positive, redemptive outcomes.”

When Belsnickel breaks the elf code (which involves him selfishly indulging his ego, which leads to lying, viciousness, envy and selfishness), he is cursed and is transformed into a human—the thing he most despises.

One of Santa’s reindeer is badly wounded after being attacked by the wicked Yule Cat, Jola. The battle is brief, but intense, the worst of it shown via shadows. However, Mrs. Claus nurses the reindeer back to health. Jola is later attacked by reindeer and seemingly blown up before Santa physically throws him out of the village for good.

Santa’s elves are poisoned with “elfbane,” which turns them into violent and crazy creatures that attack humans and each other. They arm themselves with weapons and are knocked about quite a bit, but seemingly no permanent damage is done.

Santa gets shot in the rear end with an arrow, but he doesn’t feel it. Belsnickel shoots several fireballs at Kate (narrowly missing each time) before he is hit with a fireball himself. An elf falls and hurts himself after slipping on gumballs that Belsnickel purposely spilled. Jack climbs a steep slope, then falls and is attacked by Jola in a momentarily perilous scene.

Belsnickel and Santa slam their sleighs against each other. And the reindeer pulling Santa headbutts some jackalodies (hyena-looking creatures that Belsnickel created which pull his sled) in midair. Finally, as the two play a game of chicken with their sleighs, Mrs. Claus stops them by using a grenade-like cookie to blow them up (though nobody is harmed).

We hear one misuse of God’s name. Santa says, “Holy jingle bells!” A girl says, “freaking.” Santa tells Belsnickel to watch his language after Belsnickel exclaims, “Bah humbug!” The elf also says something cool will be “the shiz,” and spits, “Humans suck!”

Teddy is reminded that he isn’t allowed to have any alcohol.

Even though Kate eventually realizes how bratty she is being, her rude behavior often goes unchecked and is attributed to her “being a teenager.” Kate and Jack nearly freeze to death after being sent to the North Pole in shorts and t-shirts.

People lie, steal, pout and whine. Several people yell at airport workers after their flights are cancelled. Belsnickel hides a whoopie cushion under an elf’s chair and then makes fun of him after it “farts,” hurting the elf’s feeling.

Several people point out that Santa’s village should be called “Mrs. Claus’ Village” since she designed and runs all of the shops within—though Santa resists this change.

The Christmas Chronicles: Part Two truly is a continuation of the first film—even going so far as to tell the same message: “Christmas spirit … lives inside each one of us. And it takes those who love us to bring it out and to help reveal what’s most important in life.”

Kate and Belsnickel both have to be reminded of this message as Kate struggles with her family moving on from her dad’s passing, and as Belsnickel slowly realizes that the Clauses never wanted to see him go. They both have to overcome their pride and selfishness in order to return to their respective families. But once they do, they are welcomed with open arms.

Obviously, this film’s holiday focus is completely on a magical Santa story. Apart from St. Nick’s origin story hinting at his connection to Christianity, the real reason for the season is nowhere to be seen here. Though this sequel is cleaner, language-wise, than the original, we still get one use of “the shiz” that might raise a parent’s eyebrow. And some action-packed moments might be a bit intense for young or sensitive viewers.

Those small caveats aside, though, The Christmas Chronicles 2 packs laughs, adventure and another story about broken families learning how to put themselves back together again. Characters overcome pride and fear. And above all, we learn that no matter what, your family will be always be there to love you and help you get through those hard times.