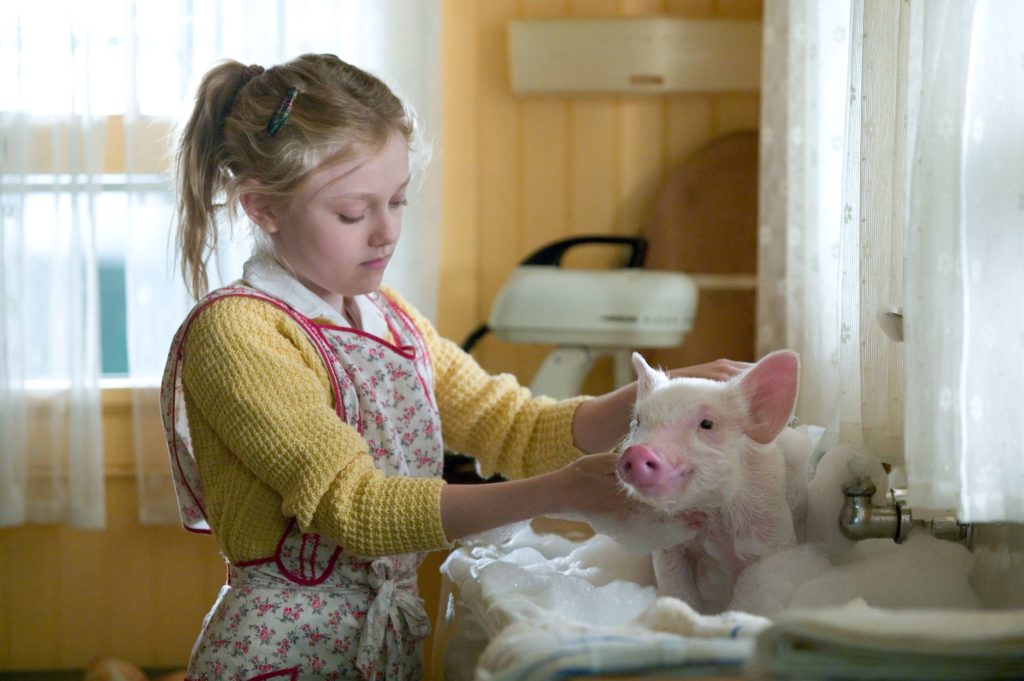 One ordinary spring morning in a deeply ordinary place (the Zuckerman farm), a young girl named Fern wakes up before dawn and runs out to join her dad, who is watching over a new litter of pigs. Her father intends to “do away” with the runt but Fern pleads the piglet’s case, commits to take care of him and gives him the name Wilbur.

Fern works hard and delivers on her promise to be Wilbur’s new mom. Before long, however, he’s too big for the house and has to be moved across the street to Uncle Homer’s barn. Left to face a barn full of rather unfriendly animals, Wilbur finally manages to make a friend—with a spider named (of course) Charlotte. But Charlotte is the one creature that the other animals dislike even more than a silly little oinker, so Wilbur doesn’t score many points for his new alliance.

Then, to add injury to insult, an antisocial barn dweller tells Wilbur, “Come winter, the farmer will be checking you into the smokehouse hotel,” and suggests that Christmas dinner and Wilbur will end up being one and the same. Wilbur is distraught. But Charlotte promises to stick by her new chum and spells out a way that her web might save his life.

The film stresses repeatedly that making friends and standing by your commitments to others is essential in life. When Wilbur asks the other standoffish animals if they are friends, they hem and haw but assure him that they all get along fine in the little barn. But the pig calls their bluff by responding, “I’m not sure that being in the same place is the same as being friends.” When Wilbur finally finds a pal in Charlotte, he literally jumps for joy. The other animals wonder out loud how an ugly spider could cause such a reaction and express their disdain, to which Wilbur says, “I think she’s beautiful,” and points out her attributes.

Later, Charlotte comes up with a plan to save her pig friend and never wavers even when it means putting herself in danger. (The two friends also show that cleverness can win out over size or beauty.) And as Wilbur and Charlotte display their commitment to each other, the other animals (including a self-serving rat named Templeton) are inspired and eventually take steps to reach out in friendship, too.

As Charlotte spins out her idea for using her web to help Wilbur, she restricts herself to using only words that are true. Some pig, she “writes” with a precision that would turn Peter Parker as green as his goblin foe. Radiant. Terrific. Humble. When Wilbur and Charlotte later go to the county fair, Wilbur worries that he doesn’t stand a chance competing against the huge swine around him. Charlotte assures him that he needn’t bother with worry. She says, “What good would that do?”

Fern is the only human to see the real nature of the relationships that are developing among the animals. However, her mother is concerned that Fern is spending too much time alone in the barn. Fern tells her, “All my best friends are there.” Mom expresses her worry to the family doctor and he replies warmly, “Do you want to know the name for her condition? It’s called a childhood phase. And sadly, it’s something she’ll grow out of.” Fern’s dad eventually comes around to an understanding of his daughter’s feelings and why she gave so much of herself to help Wilbur. He tells her, “I’m proud of you, honey.”

No matter what happens, Wilbur always chooses to see the best in everyone and responds with nothing but congeniality. [Spoiler Warning] After Wilbur returns from the fair, the other animals realize that Charlotte isn’t coming back. They look to her web, realizing what she has come to mean to them, and mourn her passing. Wilbur later protects her children as his wards.

Because of Charlotte’s web work, people around town talk repeatedly about miracles taking place. They go to speak with a priest, who, while munching candy, asks, “What brings you here … divinity?” They reply, “We think so.”

Although it’s never directly connected with God, the film points to the fact that love and friendship are indeed miraculous gifts. Charlotte mentions saying “grace” before she consumes insects caught in her web.

None. However, Fern does develop a little crush on a local boy and is motivated to look a bit more feminine. On one occasion, she dons a dress and leaves her tomboyish overalls at home.

Wilbur asks Charlotte about the flies that fall victim to her sticky web. She illustrates how she deals with them by wrapping up an insect in a web cocoon and giving him a “little nip” to subdue him. Wilbur asks, “You eat flies?” She responds, “No. I drink their blood.” (At which the skittish horse faints in his stall.) Fern’s dad picks up an ax to kill Wilbur, but he never uses it. And there are numerous references to the fact that the humans intend to kill and eat Wilbur.

Wilbur smacks into and through a wooden fence. Fern punches her brother. All other violence is of a slapstick nature as the rat is being chased and nipped at by two swooping crows. All three find themselves in tumbling pratfalls with no one really hurt.

Several uses of “what the heck?” and “what the hey?” The British profanity “bloody” made it from script to screen.

Although Fern’s desire to protect and care for Wilbur is honorable, she does show disrespect to her father while fighting to get her way. She also sneaks the pig into school and lies to her teacher about stowing him in her desk.

The rat blasts out a belch. Toilet humor includes cows passing gas, comments made about a horse’s rear and a joke told about being “in the can.”

I was sitting in the topmost row of a large theater with stadium-style seating to preview this film. And a number of families were filing in, popcorn, soda and eager youngsters in tow. A young brother and sister clambered up to my nosebleed section and turned to look back. The 5-year-old (or close to it) sister wore a glowing smile and whispered to herself, “the best!” I wasn’t sure what she found such joy in—the huge screen, the good view or just that she’d made it to the top first—but I recognized her expression like a long-lost friend. That brilliant childish wonder at the things we grown-ups see as ordinary.

That’s the joy of Charlotte’s Web. This new non-musical version has a few flat spots, and I’ve already noted most of them. But there’s something very endearing about E.B. White’s tale of friendship and innocent longing to believe the best of others. The CGI special effects are realistic (a level or two up from the likes of Babe), the Norman Rockwell-esque setting is welcoming, and the script is funny and engaging. It’s Wilbur expressing wonder over the “ordinary miracles” of everyday life, though, that will most charm the kids and inspire the rest of us.