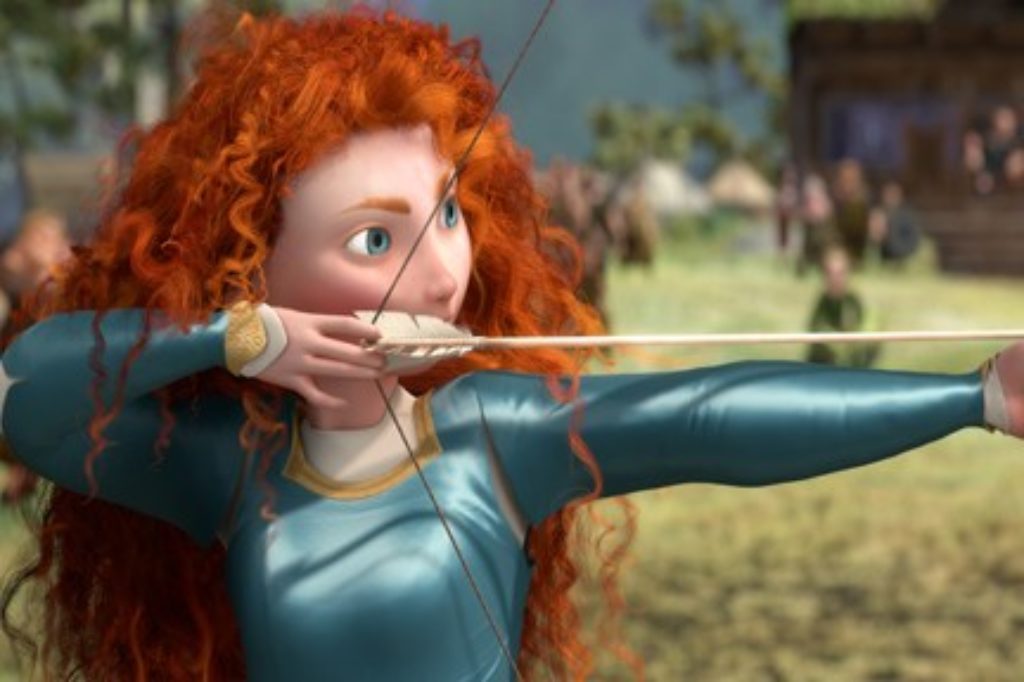 To be a Disney princess is to have mommy issues.

Snow White’s stepmother wanted to kill her. Cinderella’s wanted to lock her up. In Tangled, Rapunzel’s wanted to comb the ever-loving life out of her hair. And Princess Merida—a headstrong young lass with a spirit as fiery as her own unruly hair? Her mother wants her to grow up to be … a bride.

Practically every day, Elinor trains Merida in the finer points of ladyship: how to stand, how to eat, how to talk, how to walk. She teaches her lute-playing and schools her in the kingdom’s history and geography. “A princess strives for, well, perfection,” Elinor tells her. And only perfection is good enough. The lessons are relentless, and with each new rule, familiar scold and look of disappointment Elinor piles on, Merida feels as if her life’s not her own. That she’s imprisoned in a world of her mom’s making.

And now the final lock is in place: Elinor’s marrying Merida off. And not to the kilted boy next door, either, but to the son of one of the kingdom’s three fractious lords. She’s to be the grand prize in an archery contest, and whatever union results won’t be of love, but of duty—duty to the clans and the kingdom.

Merida’s having none of it.

In a breathtaking moment of rebellion, she competes for her own hand and wins it, enraging the lords and infuriating the queen. But Merida’s not done. Back in the castle, she slices through a tapestry depicting her family—severing Elinor from Merida’s side.

“You’re a beast!” Merida shouts at her. “I’d rather die than be like you!”

The argument grows uglier, and Merida flees from the castle with her face as red as her lashes, tears streaming down her cheeks … as she finds herself in the cottage of an old, mysterious witch with a passion for woodcarving. When the witch tries to sell Merida a bit of her handiwork, the princess suggests a different deal: I’ll buy all your woodstuffs if you sell me a spell.

“Change my mom,” Merida says. “That will change my fate.”

We’ve come to expect a lot from Disney’s brilliant animated adjunct, Pixar—beautiful art, great comedy and, most of all, fantastic storytelling. Pixar’s stories are rooted in relationships, and the studio manages to examine even the most fractious with honesty, sensitivity and grace.

Merida and Elinor’s difficult, complex relationship lies at the very soul of Brave. But while Merida may think her mother’s a beast, and Elinor might consider Merida a brat, there are no villains here: only two strong, caring and (might as well say it) brave women who, in spite of their differences, love each other very much.

Throughout the course of the movie, Elinor does change: Given a new perspective, she’s able to see Merida not as merely a flawed project but as a growing, confident young woman—more capable and mature than she had imagined. Moreover, she moves the kingdom away from the formulaic betrothal process it’s historically embraced. Instead of claiming the princess like a blue ribbon at a fair, a potential suitor must now (as a lord tells us) win her heart before he wins her hand.

But it’s Merida who changes more here. She discovers that her mother, far from being a beast, has loved and cared for her as much as anyone. She realizes that all those lessons were important—that she has responsibilities and duties that she can’t shirk or run away from. In Brave, Merida grows up before our eyes—not physically, but emotionally.

Elinor and Merida wind up risking their lives for each other, and their contentious-but-beautiful bond mimics, in its own surreal way, many a mother-daughter relationship. We see here a mom’s need to prepare her kids for the real world, a daughter’s desire for freedom and the ability to make her own decisions. Those teen years can be difficult in many households. Brave doesn’t tell us otherwise. But it asks us to remember that when you strip away all the differences and all the hurt, the bond between mother and daughter is a thing of transcendent beauty.

As mentioned, Brave is inflected with magic. It’s not the flyweight wand-waving of Cinderella or the more naturalistic conjurations of Harry Potter. Rather, it’s something more in step with the story’s ancient Scottish setting: Here, magic is mysterious. Enigmatic. Dark.

The witch works her magic through a giant cauldron and is assisted by a not-so-cute crow. Several times, Merida follows a trail of will-o’-the-wisps—strange, floating lights that her mother tells her will “lead you to your fate.” The first time she follows them, they lead to Mordu, a huge “demon bear” that bites off her father’s leg. The next time she sees them, she’s lying in a Stonehenge-like circle—a magic ring her horse refuses to enter—and the wisps’ trail leads to the witch’s door. A third time they take her to Mordu’s lair, where she discovers the bear’s dark, magical past and nearly gets herself killed.

The film seems to reflect, perhaps, a pre-Christian Scotland, when druidic influence was still strong. And while the movie’s narrative makes it clear that Merida’s dealings with the witch are ill-advised, they also help, indirectly, get her out of her betrothal.

We also hear a great deal of talk about “fate” and “destiny,” usually pushed into the realm of social expectations more than anything spiritual. A woodcarving mimics Michelangelo’s painting of God and Adam from the Sistine Chapel, only the figures are bears.

Suddenly finding herself naked in a field—under a tapestry—Elinor causes a bit of a stir among the nobles. She and her husband, King Fergus, smooch, which makes Merida pretty uncomfortable.

Though dead-set against being betrothed, Merida does seem to perk up when she thinks a massive, muscled Scotsman might be one of her suitors. He’s not. Later we see him wooing one of the castle’s servants.

A servant woman sports a robust amount of cleavage. And one of Merida’s precocious brothers dives his hand into said cleavage to retrieve a key. It’s suggested that Fergus pinches Elinor’s rear. A suitor flexes his pecs; a handful of maidens swoon at his exploits.

There’s a reason why Romans built a wall between England and Scotland. We see the king, his lords and their contingencies squabble over pride and other minor matters—hitting, kicking, biting, nipple-pinching and eye-gouging in a raucous slapstick scene. Elinor eventually grabs Fergus and the lords by their ears and drags them out of the melee to make the fighting stop.

We don’t see Fergus lose his leg, but we do see some of the confrontations with bears—battles that involve swords and arrows and claws and teeth. Two bears get into a fight in which one is killed (crushed by a rock). Merida’s injured by the swipe of a bear claw.

A servant runs into a pole. Merida falls from her horse.

Fergus drinks from a flagon. Merida suggests that her dad and the lords celebrate something by going down to the cellar and cracking open Fergus’ private stores.

The triplets engage in a number of stunts and pranks, exasperating the adults but rarely earning an admonishment. They also run around naked. (They’re shown from behind.) Fergus, along with several lords and soldiers, are seen (also from behind) without pants. A lord moons his compatriots.

Elinor gets queasy after eating a tart-like confection, burping and gagging. A stock Disney “follow your heart” refrain gives a touch of heartburn. And a dish of haggis induces gags.

Brave is a quite good tale deftly told, filled with moments of insight, beauty and humor. And of course the animation is amazing. But in terms of content, it cowers ever so slightly. Bear rears and bare rears wriggle across the screen. Lords moon one another. Magic coats the Scottish highlands like so much dark frosting.

Brave also can be scary. This place is populated by fearsome beasts, hidden dangers and unexpected threats. And the subject matter can play on a child’s deepest fears. For sensitive, younger kids, Brave may well spark a nightmare or two.

Which brings me back to something I wrote earlier: We’ve come to expect a lot from Pixar. Ever since the release of Toy Story in 1995, the studio has dazzled us with some of the finest, most family-friendly movies ever. In this humble reviewer’s opinion, not even Disney in its golden age (1939-47) or renaissance (1989-2000) can match Pixar’s present run.

All of which sets up Brave as a bit of a disappointment … except in the area of its familial lessons learned by both mother and daughter. They’re not just magical: They’re practical. They’re discerning. And they’re inspiring.