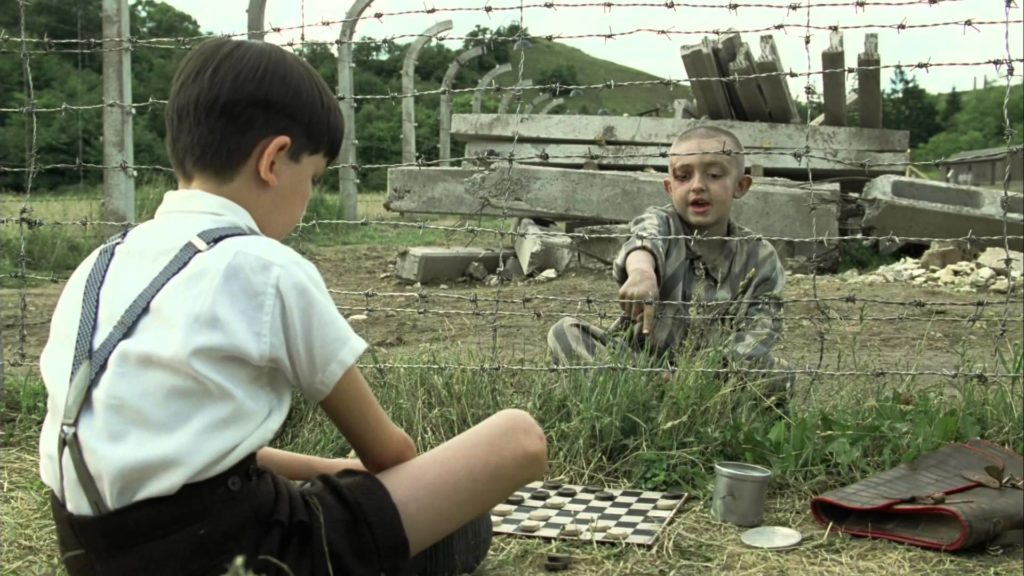 Ah, little boys. They’re impish, curious, messy and daring. Most mothers of boys have at least a few gray hairs because of their sons’ escapades. Sometimes boys really can stop fidgeting at the table and squirming during church. Sometimes they can even resist the temptation to torment their sisters. Rarely, though, can they ignore the all-consuming urge to explore—and this thirst for excitement can get them into trouble.

Enter 8-year-old Bruno, an inventive young German who loves to read adventure books and investigate whatever is outside. When we meet him in the early 1940s, his father, Ralf, a high-ranking military officer, has just accepted an important position within the Nazi war effort. The family packs up their city home in Berlin and moves to a country house located near what Bruno thinks is a strange farm.

Naive Bruno doesn’t fully understand what’s happening in his new world, including why his 12-year-old sister, Gretel, suddenly spurns a treasured doll collection and decorates her bedroom with Nazi youth posters. He can’t comprehend why old Pavel, a “farmer” who works in the kitchen, gave up being a doctor so he could peel potatoes. Nor can he fathom why Pavel and all the other “farmers” wear striped pajamas.

Bruno especially struggles with his mother’s order to stay inside their very uninspiring, walled-in front yard. After all, he thinks the “farm” just beyond the woods out back must be full of fun, food, animals and potential playmates.

So, when his tedious tutor, Herr Liszt, and the lackluster life indoors become too much for him to tolerate, he begins to sneak off. He runs through the trees to the “farm,” where he meets Shmuel, The Boy in the Striped Pajamas who lives behind a huge electrified fence.

Bruno’s mother is reasonably patient with his disappointment when they move, but she isn’t silent, either. She tells Bruno that sitting around being miserable won’t make things any happier. In response, for a while he tries his best to be content.

Despite the adults around him who demean Jews, Bruno ultimately learns to see Shmuel and Pavel through the lens of his own positive, firsthand experience with them. While his friendship with Shmuel wouldn’t necessarily be called courageous (Bruno is bored and unaware, and Shmuel is the only friend available), it does reveal the beauty of innocence, which underscores the wickedness of the adults’ cruelty. And while Bruno is at first intimidated into siding with his father’s and the surrounding soldiers’ hateful opinions of his Jewish friends, he realizes that something is very wrong, and he questions his dad’s moral goodness.

One day Shmuel’s father goes missing at the “farm.” Bruno offers to help his friend search for him, saying, “It will be like an adventure!” Shmuel gets a pair of spare “pajamas” for Bruno so he won’t draw attention, and Bruno digs a (precise and impossibly large) trench under the fence. Until he comes face to face with the horror inside the wire, Bruno seems to just be having fun. But when he sees enough to become frightened, he gathers himself and makes a clear decision to face his fear in order to help his friend.

This act is redemptive, in a way, since Bruno turned his back on Shmuel a few days (weeks?) earlier. In that circumstance, he lied in such a way that Shmuel is thought to be a thief and is subsequently beaten by soldiers (offscreen).

Elsa’s ignorance about what’s going on in war-torn Germany is much less excusable than her son’s, and it seems she chooses to remain oblivious regarding what occurs at the “farm.” But when she finally realizes how grave the situation is—that her husband is in charge of mass exterminations—she begins to justly rail against him, demanding that he immediately quit. She’s also alarmed by Gretel’s growing vehemence against Jews.

While raising questions about where duty to one’s country ends and conscience and morality begin, the film winds these themes together to teach a powerful lesson about human equality. Prejudice is rightfully shown to be based on lies and hatred. And it’s reinforced that every one of us has a responsibility to choose rightness and truth, even when the tide of a society is utterly against us.

Bruno says a bedtime prayer with his father, thanking God (in Jesus’ name) for His protection. It’s a sweet children’s rhyme that seems real to the boy, and its candid trust feels oddly situated against Nazi hatred. A preacher says another prayer at Ralf’s mother’s funeral service.

Precocious Gretel holds twentysomething Lt. Kotler’s forearm in an adoring way and is embarrassed when Bruno publicly reminds her that she is only 12.

Oblivious to the real-life awfulness they’re mimicking, Bruno and his young friends in Berlin act like fighter planes and pretend to shoot machine guns. In a different play scene, Bruno runs through the woods flailing a stick and shouting, “Die! Die!” A little blood shows up when he falls out of a tire swing and skins his knee.

Nazis shove Jews onto wagons while dogs nip and bark. When inky black smoke rises from the furnace at the “farm,” Lt. Kotler quips, “They smell even worse when they burn, don’t they?” Later he and Ralf yell at Pavel, and Kotler beats the old man to death. We see the lieutenant grab Pavel’s head and hit him, and we hear yelling and more powerful blows after Kotler drags him into another room. The next morning, Maria scrubs the blood from the wood floor where Pavel lay.

Kotler also yells at Shmuel and Bruno. We don’t see the officer hurt Shmuel, but it’s clear that he does when the boy disappears for days and finally returns with a badly beaten face.

Ralf calmly announces his mother’s death. We’re told she died in a bombing, but circumstances could be viewed as suspicious because she’d stridently opposed the Nazi party line even when Ralf warned her not to. Similarly, Lt. Kotler talks himself into a corner one night by casually mentioning that his father emigrated to Switzerland before the war. Ralf reminds the lieutenant that he must report his father as a defector, and Kotler is disciplined for his oversight by being moved to the war’s front line.

And then we arrive at the final minutes of The Boy in the Striped Pajamas: Nazi soldiers herd men and boys into a gas chamber. We see their terrified expressions as they’re jammed against one other in the dim room. A soldier wearing a gas mask rains down poison through a rooftop opening. And prisoners howl until there is silence.

In making its righteous points about prejudice and racism, The Boy in the Striped Pajamas resists the temptation to brandish epithets, but does include anti-Semitic remarks. Ralf claims that Jews “aren’t really people at all.” Gretel calls them “evil, dangerous vermin.” Liszt teaches his pupils that Jews are a destructive enemy of culture that cost Germany the first world war. He also tells Bruno that if he finds a “nice Jew” he “would be the best explorer in all the world.”

The adults have champagne at a going-away party and later drink wine with dinner. Ralf smokes cigarettes, sometimes in front of his kids.

Bruno and truthfulness share a strained relationship. He frequently lies to his mother about his whereabouts, disobeying her rules. He fibs about the contents of his book bag. And when he lies to Lt. Kotler, saying Shmuel stole food, his selfishness costs Shmuel dearly.

Elsa and Ralf argue loudly about his role in the war, causing Gretel and Bruno to huddle together for comfort. Elsa calls Ralf a monster whose own mother couldn’t love him.

Crowds of Jewish men and boys are forced to strip naked. Huddled together, and with the camera looking on mostly from above, only their upper torsos are seen.

Set against the horror of the Holocaust, Bruno’s naiveté and investigative spirit look that much more innocent. The boy’s inability to comprehend prejudice and killing, and his instinctive, uncomplicated ability to see Jews as real human beings starkly contrast Nazi cruelty, brightly illuminating the viciousness and irrationality of the bloodshed.

A significant plot twist—which is one spoiler I’ve tried very hard to keep out of this review—demonstrates with breathtaking force how the consequences of evil behavior eventually affect all those involved, perpetrators included.

Beyond this, Elsa’s role may serve as sobering testament against complacency. After she blindly follows Ralf to his new post, she struggles with her own attitude toward Jews but does nothing significant to help them, even as she begins to recognize their unjust fate. Her conformity should remind us of our own apathy in other situations, and it challenges us to question situations until we fully understand them, fight for what we believe in and stand up for those who cannot defend themselves.

The Boy in the Striped Pajamas, which is based on a book by John Boyne, also illustrates how powerful words and images are. Bruno, who likely represents thousands of his contemporaries, doesn’t always know what to make of his father’s job. That is, until a propaganda film he sees calls the death camp—the “farm”—a wonderful place with “hearty, nutritious meals,” and the camera shows seemingly happy Jews smiling and waving. After the film, Bruno proudly hugs his father.

It’s often said that if history is forgotten, it’s likely to be repeated. So perhaps the most profitable thing about the film is the fact that—without including any of the gore and explicit violence seen in similar films—it reminds us about our global history of brutality. We must recall and keep recalling the Holocaust and other atrocities like it. And never overlook the millions who have needlessly died at the hand of hatred and greed.

Heartbreaking and soul-rending, The Boy in the Striped Pajamas is, then, one more piece of the puzzle that ultimately forms the picture of who we were, who we are and who we don’t want to become.