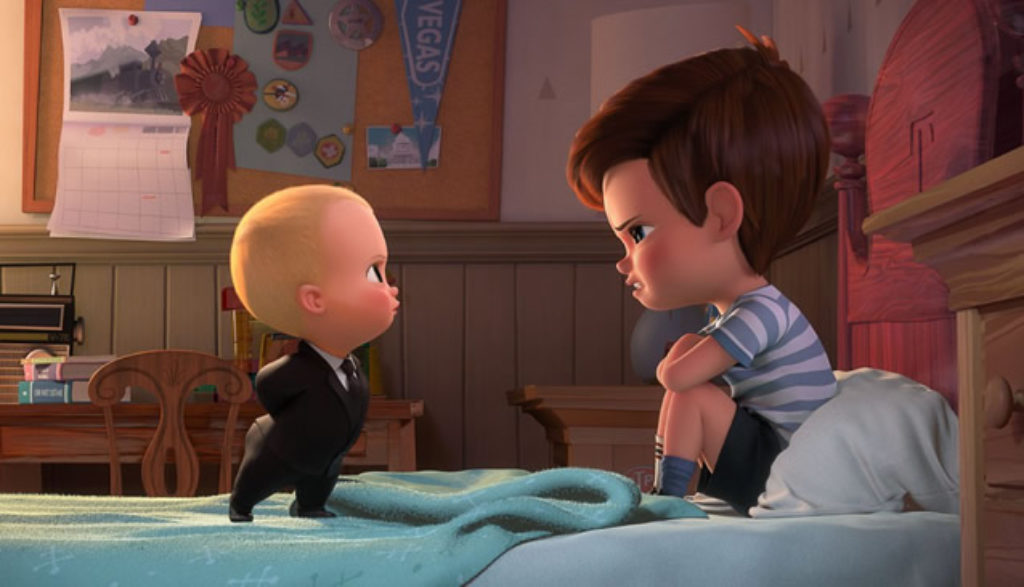 Tim Templeton was once a perfectly happy little kid.

I mean, this 7-year-old has always had an imagination as big as the great outdoors. And his loving mom and dad have been more than happy to help him cultivate and unleash it.

Together they played and romped, soaring from outer space blastoffs in the backyard to deep-sea treasure hunts in the living room. Why, even dinnertime could instantly become an exotic big game hunt along a mysterious boggy river bank in Africa, if the mood was right.

When bedtime came around, well, there were hugs and stories and songs and more hugs galore. Life was completely and totally perfect.

But then IT showed up.

A cab dropped this creature off. And, just like that, all the joy was sucked out of Tim’s young life. Mom and Dad call it his “baby brother,” but there’s definitely more boss than baby in this monster mix.

If the boss wants to be coddled or carried or changed or fed or … anything, all he has to do is scream, and he instantly gets it. Day or night. He wears a business suit and carries a tiny briefcase, for goodness sake. That can’t be normal, can it?

Oh, and bedtime? That’s totally changed. Gone are the stories and songs and hugs. Tim is lucky if he even catches a glimpse of his parents as they quickly scurry from one baby, ahem, duty to the next.

But there’s something else. His parents don’t see it, but Tim is certain he’s spotted a steely glint in that little boss baby’s eye. It’s a manipulative awareness Tim doesn’t think average diaper wearers should have. And there are times, when the baby is off by himself supposedly taking a nap, that Tim is pretty sure he’s heard him talking in a low voice. A gruff voice. A man’s voice.

You know, the kind of voice you’d expect from a … boss!

Could Tim possibly be imagining all this? His life has gotten so miserable that he isn’t sure of anything anymore. But he definitely will be keeping his eyes peeled. For one thing is certain:

This baby ain’t the boss of him!

As numerous trailers for this film have practically proclaimed for months now, we eventually find out that this peculiar Baby is indeed part of the management team for a big conglomerate called Baby Corp. As a way to get rid of this interloper, Tim agrees to help Baby foil a nefarious anti-baby plot being put into effect by a competing business called Puppy Co. Despite their initial animosity toward each other, Tim and Baby both eventually discover that having a brother and being a part of a loving family—together—can actually be a good thing for everyone involved.

Dad talks about the new baby and assures Tim, “One day, you’re gonna get to know this little guy, and you’re going to love him with all your heart. Just like we do.” But that makes Tim worry all the more. “All your heart?” he wonders, not yet convinced.

Tim’s also exasperated by the fact that Baby assures him there isn’t enough love to go around. Through it all, though, Mom and Dad are consistently loving, even when business stresses and exhaustion take a physical toll on them. Eventually Tim tells his baby brother, “If there isn’t enough love for the two of us, then I want to give you all of mine.” And Tim talks of brothers standing by each other year after year.

Tim asks Baby if he’s the baby Jesus, but he also imagines Baby with devil horns. Reinforcing that latter point of view, Baby says at one point, “I’ve come for your soul.” Still, those “spiritual” moments are played for laughs.

Tim has an alarm clock that features a talking Gandalf-like wizard. This doll-like mechanical character talks of putting a curse on Baby and exposing “his dark magic.”

Baby gives Tim a pacifier to suck, suggesting that it will magically transport them to cloud-based Baby Corp. He also states that when babies have their pacifiers taken away, they eventually forget about that baby generating company.

Baby faces the camera once naked, his privates pixelated. Another time, Tim and Baby go through an airport X-ray machine, both holding their hands over their crotches.

Although babies arrive in taxis, and it’s intoned that the Baby Corp. is behind their “manufacture,” at one point Tim whispers (to another character) a different theory about where babies come from—this one from his parents. We don’t actually hear what’s said, but following that mouth-to-ear moment, Tim remarks about how “disgusting” this concept is.

There are a number of thumping, crashing and tumbling action scenes in the movie mix here. Tim slams into a tree, vehicles blow up, babies are chased and tossed about by a large thuggish man. But the film suggests that many of those interactions are quite possibly only in Tim’s imagination.

For instance, we see Baby ramp up and over Tim with a pedal car at one point and Tim is dragged and pummeled behind the speeding vehicle while another baby smashes through a wooden fence. But we then witness the same scene from Mom’s perspective, and the car is barely moving through a grassy backyard playground, and nothing is smashed or broken.

Elsewhere, Tim gets hit in the crotch with a thrown toy. A man has his head slammed into a toilet. Baby tears apart and “tortures” Tim’s favorite toy. Tim tumbles down a flight of stairs. Someone is bitten by a baby dressed as a puppy.

One obvious misuse of God’s name and perhaps another as well. We hear one use of “darn” and a couple utterances of the words “fart,” “poop” and “doodie.” There’s a single use each of “heck” and an unfinished “what the—?”

Baby Corp. managers drink a special baby formula that keeps them from growing older. Baby and Tim hitch a ride in a limo with a bunch of partying young women, where Tim takes a sip of Long Island Ice Tea and promptly spits it out.

Bare baby bottoms are repeatedly on display to elicit audience giggles. And those exposed backsides are sometimes related, one way or another, to the movie’s plentiful toilet humor. In fact, there’s a diaper pail-full of it here, with baby poo and gas gags galore. There’s also some sniff-a-puppy’s-backside potty humor in the mix, too.

Back in 2010, author Marla Frazee created a children’s picture book based on one creative conceit: When a newborn arrives, he takes instant control of … everything. It’s a warmly funny baby-in-a-business-suit idea when delivered in the form of a 30 page board book.

If you’re thinking, however, that stretching this hostile infant-takeover premise into a 90-minute movie might be a tad tiresome at times, well, you’d be right. This flick’s domineering diaper-dweller, voiced by a suitably imperious-sounding Alec Baldwin, does kinda get, uh, old pretty quickly. And the pic as a whole tends to require a little too much toddler toilet humor and loopy corporate-baby backstory to keep things bobbing along like a yellow ducky in the bathwater.

Fortunately, there’s more here than meets the movie trailer’s eye. Scenes where we delve into older brother Tim’s limitless imagination are creative and fun. There are plenty of baby idiosyncrasies and mannerisms to giggle over. And The Boss Baby’s eventual affirmation of sibling bonding and familial love makes all its toddler toilet humor a bit more bearable.