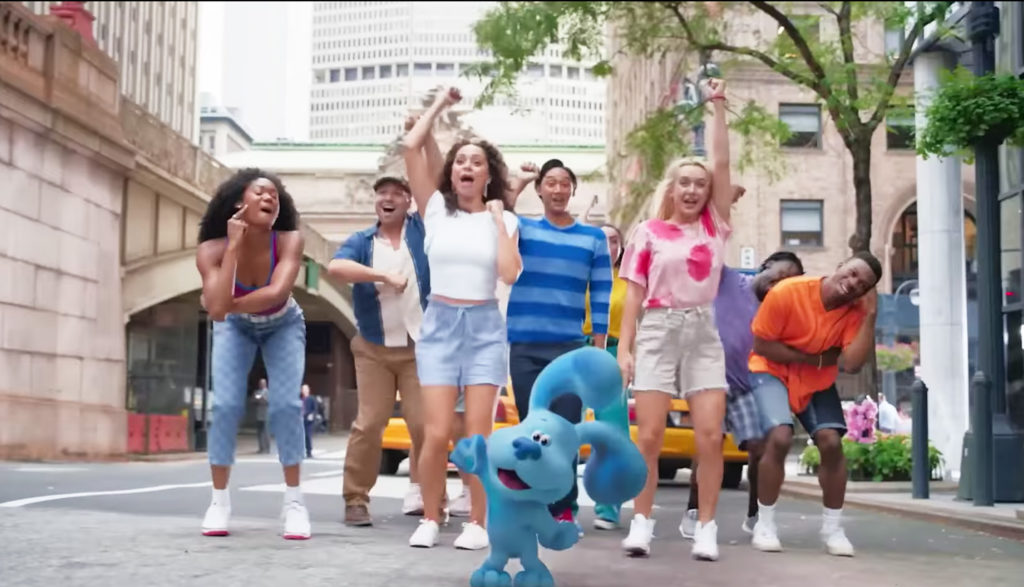 Believe it or not, Josh—the dog Blue’s constant companion of Blue’s Clues and You—hasn’t always wanted to hang out in Storybook World. Back when he was a kid, he wanted to be a Broadway star. But you know how it is. You have these grand dreams as a child and then, one morning, it’s 10 years later and you’re spending your days with talking salt-and-pepper shakers.

But what is the message of Blue’s Clues? It’s simple: You can do anything you wanna do! (Within reason, of course. To, say, invade a small country would be taking the message out of context.) And it turns out, Josh’ chance for Broadway stardom hasn’t faded yet. Rainbow Puppy—yes, the Rainbow Puppy—would love for him to audition for her Broadway production!

Alas, Rainbow Puppy didn’t give Josh a lot of notice. The audition is at 3 p.m., and Josh’ll have to travel all the way to New York City. And while the Skidoo Express can get him there, Josh gets so flustered that he leaves behind his Handy-Dandy Notebook!

That’s a big deal because Josh wrote down the theater’s address in that Handy-Dandy Notebook. And it’s not like you can stop a Manhattan cabbie and say, “Take me to the theater.” Broadway’s a pretty big place.

No, Josh will need a little help. He’ll need to follow some clues to find the right theater. He’ll need some of his Storybook World friends to bring him his Handy-Dandy Notebook. And hey, he might just find a little help from some old familiar faces, too.

Positive elements? Well, let’s start with Josh’s attitude. He’s as positive as they come. His smile is ever-so big. He’s always willing to burst into song at the least little provocation. Why, he’s so buoyant that he can instill sentient life into everything from mustard bottles to trash cans. (In a different movie, that would feel a bit Frankensteinian and spark a whole bunch of “don’t-mess-with-the-realm-of-God” introspection, but this is Blue’s Big City Adventure, so we’ll just go with it.)

And while the movie is quite sincere in telling its young viewers that they can do anything they want, it never suggests it’s just by magic. Josh meets with Ali Stroker (the first wheelchair-using actor to appear on Broadway and be nominated for a Tony award), who tells Josh that it’s always good to work hard and exercise your voice.

“Keep practicing,” she tells Josh. “And know that your dreams can come true, like mine did.” It’s a nice message.

Also nice: That Josh has so many people (and things) eager to help him on his journey. Blue’s Big City Adventure suggests that a good attitude can take you a long way, and that good friends always help each other.

Again, while sentient coffee cups could stir some heavy theological discussion, we’ll restrict this conversation to the fact that Josh apparently sweats glittery magic. Which is also happiness.

We see some midriff-baring background characters. In a dance sequence, A man gives another man a bouquet of flowers. (The guy appreciatively says, “For me?”) A male character wears nail polish.

So that’s it for explicit sexual content here. But we’d be remiss if we didn’t mention that Blue’s Clues for You (the 2019 reboot of the original Blue’s Clues) has been lauded by the LGBT community for waving its Pride flag to a preschool audience.

We see plenty of nods to the show’s sympathies in the movie itself. Rainbows are everywhere—from rugs to curtains to little curly windcatchers. Rainbow Puppy is certainly a critical character (though she seems to be far more interested in finding a “star” for her play than any overt activism). And we should note that Magenta—Blue’s friend—makes a cameo, too, and many folks online have speculated that the two girl dogs are a couple.

Someone almost utters an OMG, but the last word is cut short. A talking bus says, “Sheesh!”

None—though a detective often needs to eat a pretzel to think.

The Skidoo Express lands in a busy New York thoroughfare and seems to make some assumptions regarding the legality of parking there. (“This is a spot?” he says to himself. “Yeah, sure it is. It’s gonna be fine.”)

The original Blue’s Clues started running on Nickelodeon way back in 1996. Many of its original viewers probably have preschoolers of their own now, which makes Blue’s Big City Adventure a study in nostalgia as much as a vessel for learning. In fact, the film brings back the original show’s two longtime hosts: Steve Burns (the original host Steve, who’s now a hardboiled New York detective); and Donovan Patton (who plays Joe, now a balloon-and-gift salesman). Their appearances here, really, are the highlight of the movie.

Naturally, given the story’s intended audience, there’s little explicit content to wade through.

But that, of course, sidesteps the rainbow-painted elephant in the room.

Those rainbows are everywhere. And while one could generously interpret their elements as augmenting the movie’s über-colorful Crayola vibe, I suspect that the movie’s makers had a different agenda in mind. The movie sometimes feels if it was mainly created to boost the brand’s Pride-friendly bona fides, with entertaining the average 3-year-old coming in a distant second.

Writing about the Blue’s Clues television reboot, Chad Felix Greene said, “Once again, adults are the ones making decisions about what should matter to children based on their own insecurities and longing for personal validation. They have taken an innocent representation of childhood curiosity and learning and deformed it into a vessel for all their own narcissistic obsessions with gender and sexuality.”

That criticism feels fair to me. But I think it’s also fair to ask just what the intended audience of Blue’s Big City Adventure—again, kids between the ages of 3 and 5—would make of all those LGBT dog whistles. Might they look at all those rainbows and just see … rainbows? Like they know from Noah’s Ark? Like those they might draw on a picture? Like those they see in the sky?

If Blue’s Big City Adventure is trying to send a message to the average 3-year-old through its set design, it seems that they may be overestimating those toddlers’ understanding of gender-identity politics. It’s very possible—dare I say, likely—that they’d not notice or care.

Parents, on the other hand, do notice, and they certainly do care. Perhaps that makes Blue’s Big City Adventure less about whether it’s appropriate for the kids and more about whether you want to support its agenda. And Blue’s Pride-friendly mission may make many a mom and dad see red.