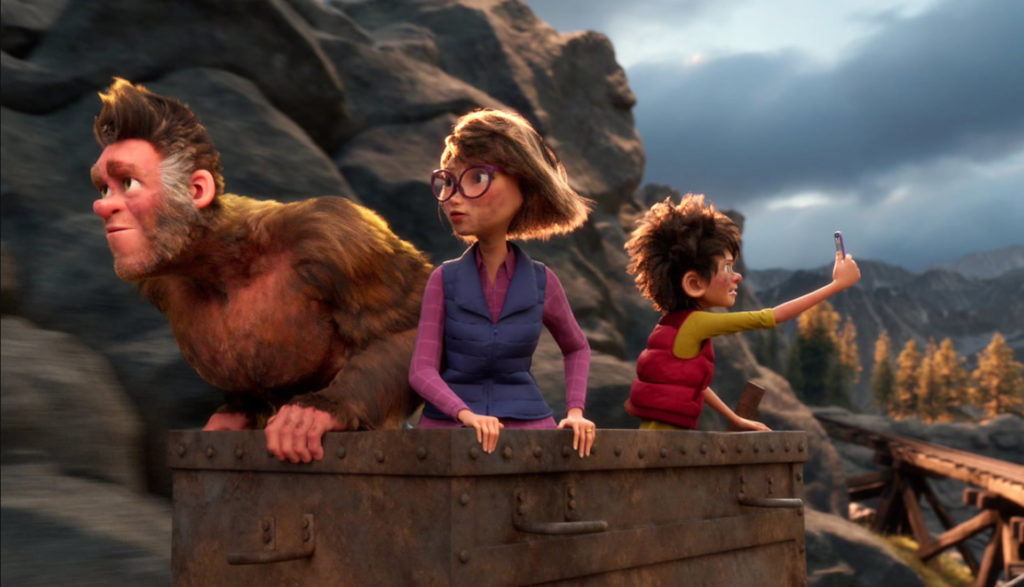 Adam Harrison isn’t like any other kid around. His dad is Bigfoot. Yes, that Bigfoot.

Once a scientist, Dr. Harrison turned into the furry legend during a genetic experiment gone wrong. As a result, he gained super speed, the ability to heal himself (and others) as well as the ability to talk to animals. Alas, he was forced hide in the woods for years (hence the legend) when an evil corporation hunted him down, hoping to study his condition and do more experiments on him.

But a few years ago, Adam (who inherited all of these spectacular abilities, minus the fur) exposed the corporation and was finally able to bring his dad home.

While technically “home,” Dr. Harrison is experiencing his proverbial 15 minutes of fame, and he’s determined to do something with it. So as soon as he has a break from all the press junkets, he decides to take a trip to Alaska to expose a supposedly “clean” oil company.

Unfortunately, instead of exposing X-TRAKT (which claims to always put the environment first) he gets caught by them.

And now, it’s up to Adam to save his dad once again.

Adam is angry with his dad for running off to Alaska after spending so many years apart, stating that one person isn’t enough to make a difference in how “Big Oil” operates. However, Bigfoot believes that it’s his duty to make a change in whatever way he can. By the end of the film, father and son reconcile, with Adam realizing that one person can make a difference and Bigfoot realizing that just because he can doesn’t mean he can’t ask his family for help.

After Bigfoot posts a video encouraging people to write letters to their government representatives and join his protest to protect Alaska, Adam revamps the video to make it go viral. And while he only does this in the hope that his dad will be able to come home sooner, his efforts do help. And the government eventually agrees to protect the land and wildlife living there.

When Adam believes he might die, he apologizes to his dad for being rude to him and tells his mom that he loves and appreciates her. Bigfoot chastises Adam when he sasses his mom. Some characters are rude to others but later apologize.

Bigfoot attained his powers through a genetic mutation, which was passed on to Adam. Both his and Adam’s ability to heal is shown through colorful sparks that come from their hands.

A man states there’s no such thing as ghosts but gets frightened after seeing empty coffins with crosses on them. Someone else says their group could become ghosts if they die.

Adam kisses a girl. Bigfoot’s wife gets annoyed with a reporter for being “handsy” with him. A girl calls Adam “cute.” We see a bear taking a shower.

X-TRAKT nearly kills the Bigfoot family, as well as all the wildlife living in a valley, with a bomb that would flood the valley with oil. When the “black smelly water” comes out of the ground, several animals call it “poison” and flee their homes to avoid drowning in it. Some of the oil catches on fire when drone planes crash into it and Adam’s mom warns him not to breathe in the toxic fumes.

A hired gun named Arlo tries to kill the Bigfoot family using armed drones. He knocks Adam out and later pushes a mining cart on top of him. Adam is also thrown down a mining shaft by another adult. Arlo also says he blew up his foster home when he was a child and knocks a scientist around.

A rabbit is chased by a wolf, and the wolf expresses his desire to kill and eat the creature. Several people and animals are beaten up by an angry moose. A bird is trampled (though he’s OK) by a group of raccoons. Adam’s mom threatens to turn a bear into a rug.

Characters get knocked and tossed around, we see several vehicles crash and fall off cliffs, and several people nearly drown in a river (though nobody is seriously injured). Several animals are knocked out with tranquilizer guns. Adam finds a skull in a mine shaft.

The CEO of X-TRAKT states that people are gullible, and his company profits off of this weakness. He says that if someone exposes his company, he’ll claim it’s “fake news” and essentially play dumb.

Adam points out that if X-TRAKT’s oil processing procedures are so clean, the technology should be shared with the world instead of waiting for a patent. His mom also points out the corrupt irony of a news station taking ad money from a company they are investigating and interviewing.

Kids and teachers at Adam’s school pretend to be interested in him in order to get autographs from his dad. A boy accidentally hides in a girl’s lavatory. We hear that a girl’s parents are divorced. Bigfoot scares a man out of his house when the man tries to bully him into signing endorsement deals. A man vomits. Characters lie, cheat and litter. Several characters hide in a van to secretly cross the border between Canada and the United States. A character says that seatbelts aren’t for animals.

Bigfoot Family explains the dangers of oil drilling much like film Fern Gully explained the dangers of logging and destroying rainforests did when I was child, though in a less scary way.

There are no supernatural oil monsters here, just a group of morally corrupt human beings willing to do whatever it takes to make it rich. And I say “morally corrupt” not because the film anyone who uses oil is bad (Adam and his mom certainly burn quite a bit of gas driving their camper to Alaska), but because the villains here lie about how they attain their oil—i.e. wantonly destroying entire ecosystems using bombs to flood valleys with oil.

The Bigfoot family puts their own lives on the line to save hundreds, if not thousands, of flora and fauna from this environmental disaster. And Bigfoot realizes that while his family is happy he’s out trying to save the world, they also just want him home after so many years of being apart.

The film doesn’t come without caveats. Bigfoot and Adam both have supernatural gifts. And even though they attained these powers through science and use them for good, it might be worth discussing before watching. The d-word also pops up, surprisingly, which might make the flick a no-go for some families. And some families may still want to talk about the film’s messages about oil use and the environment, as the caricature of this particular oil company isn’t a flattering one.

Still, the film’s focus on preserving the planet and keeping families together is an admirable one, and it might also be a great conversation starter for families to discuss the call to stewardship of creation that God gave humankind in Genesis 1-2.