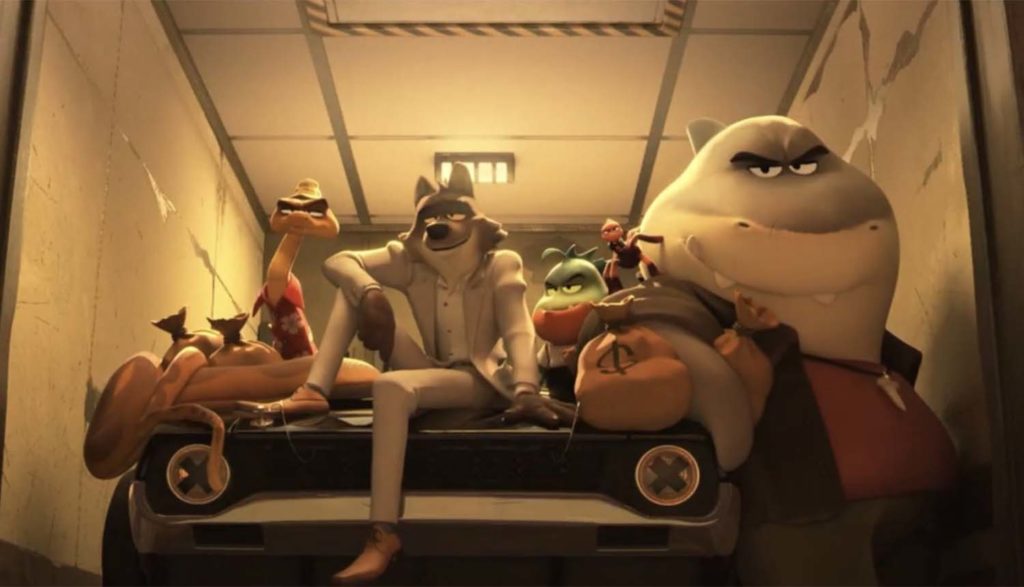 If there’s one thing that Wolf, Snake, Tarantula, Shark and Piranha have in common, it’s that you don’t want to encounter any of them in the wild. But as far as they’re concerned, that’s OK.

“Do I wish people didn’t see us as monsters?” Wolf quips. “Sure, I do. But these are the cards we’ve been dealt, so we might as well play them.”

Society never gave these five a chance, so they decided to take on a life of crime and mischief. And they’ve gotten pretty good at it. They relish news reports labeling them dastardly and diabolical. And those news outlets ain’t seen nothin’ yet: The Bad Guys are about to pull off a heist that no other criminal crew has ever accomplished.

What’s the target? Well, they hope to steal the Golden Dolphin, the award given to the year’s “goodest” citizen. It’s the epitome of good for the best of the best. Looting it from under everyone’s noses is sure to cement them asnot just any bad guys, but the Bad Guys.

But then something unexpected happens: After Wolf accidentally does a good deed for another person, he finds that he actually likes it. Perhaps it wouldn’t be so bad to try being, dare he say it, the Good Guys? And though it’s hard enough to convince himself and his crew to try it out, there’s still that societal problem that caused them to go bad to begin with.

“I’m the villain of every story,” Wolf says. “Guilty until proven innocent. Even if by some miracle, we did change, who’s gonna believe us?”

The Bad Guys, at its core, mixes the nature vs. nurture debate with the problem of societal stereotyping. Most people in the city, the Bad Guys included, subscribe to a generally universal acceptance of the nature side of the debate, leading to the Bad Guys being stereotyped as the villains of the story. Whether it’s as the Big Bad Wolf in the story Three Little Pigs, or movies like Jaws or Piranha, the Bad Guys have been typecast since before they were born. The prejudices of the general public are so extreme that a reporter says, “You should always judge a book by its cover, and all stereotypes have been affirmed.”

But not everyone in the city feels that real character change is impossible. If the last name didn’t give it away, Governor Diane Foxington is a fox—if you’ve seen Zootopia, you know the bad rap foxes get for being sneaky and sly self-seekers. As someone who had to prove herself to society and overcome her own stereotypes, Diane is in the business of helping people realize that they don’t have to play by the script society has assigned them.

This is most prominently explored in how Wolf and Diane discuss a piece of art outside the Good Samaritan Awards. Wolf takes a single glance at the rust-covered statue, calling it “trashy, pointless and pretentious.” But Diane doesn’t see it that way. “I think it’s about perspective,” she says, pointing Wolf toward the shadow of a swan the sculpture is making. “If you look closely enough, even trash can be recycled into something beautiful.” As Wolf begins to embrace making good choices, he realizes exactly what Diane meant.

Wolf feels good when he does selfless actions. Indeed, another character named Professor Marmalade teaches the Bad Guys that being good feels good, and it includes paying attention to other peoples’ needs before your own and paying attention to the needs of others in the first place. And while this is all true, the movie still warns us that just because something feels good doesn’t mean that it is good.

Throughout the movie, the Bad Guys feel tingly when they do good, causing their respective tails, fins or abdomens to wiggle. However, one character exclaims that he gets the same tingly feeling whenever he does bad, selfish actions, too.

This scene warns viewers not to base objective moral good on fickle emotions, which can be misleading. And its inclusion could also serve as a great discussion starter for parents and kids regarding what it means to be good, as well as how to discern personal feelings and desires from objective morality.

Various male characters have their pants pulled down or torn from them for comedic effect, exposing their boxers. Wolf mentions that grappling hooks have a propensity to tear off your pants accidentally. A criminal known as Crimson Paw tells Wolf to wear clean underwear just in case.

Professor Marmalade, the recipient of the Golden Dolphin award, owns a stone statue whose private area is covered by an etched leaf. Many characters say that a meteorite, which is in the shape of a heart, looks like a rear end, and they refer to it as the “butt rock.” An alias on Piranha’s rap sheet calls him the “Butt Biter.” In one scene, Wolf dances with Diane, and the two share a romantic glance. Wolf kisses Diane’s paw when he introduces himself.

During a heist, Shark dresses as a woman, wearing a dress, pearls, lipstick and heels. Shark also throws his drink on the ground to simulate a woman’s water breaking and pretends to start having contractions in order to distract security guards.

The movie’s nonstop, slapstick violence imposes little visible injury on anyone involved. The Bad Guys rob a bank and flee the police, many of whom crash their cars in the pursuit. During a heist, the Bad Guys incapacitate various guards or workers by tying them up or knocking them unconscious. A laser gun destroys a statue.

A meteor crashed into the city a year prior, leaving a massive crater. Snake and Shark fight over a popsicle on a couple occasions, and Shark eats Snake (though Snake is unbothered by this and appears fine in the next scene). Snake eats a massive quantity of guinea pigs, and he is forced to spit them out as Wolf twirls him like a lasso, sending the guinea pigs flying. Police Chief Misty Luggins accidently slams Snake’s tail into a briefcase. Snake gets kicked in the face. His rap sheet explains that he ate all the animals in a man’s pet store.

Piranha accidently knocks Shark out with a grappling hook. Wolf is hit by a semi-truck. A scared cat claws at Wolf’s face. Wolf is electrocuted. In a moment of anger, Wolf yells that he will kill Professor Marmalade. Snake and Wolf fight. The Crimson Paw defeats prison guards with martial arts and causes a large explosion.

A truck runs over a guinea pig (the guinea pig briefly appears as roadkill, but it springs up unaffected). A tsunami that’s comprised of thousands of guinea pigs destroys parts of the city.

The acronym “OMG” is used once. Wolf uses “pack” to substitute a cruder word: “Let’s make like a wolf and get the pack out of here.” Professor Marmalade calls the Bad Guys “walking garbage.”

Shark takes two alcoholic beverages from a man, and he uses one to splash onto the ground. A gala contains a bar with alcoholic drinks. Wolf sprays cops with champagne to impede their pursuit.

There’s plenty of general toilet humor here, of course. Piranha passes gas throughout the film, and the gas causes people to pass out. Piranha makes a reference to Wolf drinking out of a toilet.

The Bad Guys pickpocket items from the general public. They’re also sent to break into an animal testing lab (which conducts tests on regular, non-anthropomorphic animals). Professor Marmalade mentions evolution as the reason why the Bad Guys are pegged as the bad guys.

Snake swallows items to carry them inside himself, and he vomits them to get them out. Snake says guinea pigs are his favorite meal and that a guinea pig’s cuteness is what makes them taste so good. “You’re eating pure goodness,” Snake says. “It’s not about the pig, it’s about what it symbolizes on a deeper level.” Snake spits on the ground.

Rumors indicated that a sequel to Zootopia would arrive in late 2021. While those rumors didn’t pan out, The Bad Guys could definitely serve as a sister film to the animated hit.

Unlike Zootopia’s heroic protagonist, Judy Hopps, The Bad Guys follows the less savory members of society: the Wolf, the Tarantula, the Snake, the Piranha and the Shark. They’re the villains of the story and they serve as a warning in fables: They’re not just bad guys, but the Bad Guys.

But the film suggests that their criminal past isn’t entirely their fault. They live in a society that struggles with some prejudices—ones that have declared them to be villains even before they were born; it’s hard to convince people that you’re friendly when all they can think of is the Big Bad Wolf.

So how do Wolf, Tarantula, Snake, Piranha and Shark feel about this typecasting? Well, having society calling them monsters from birth certainly isn’t the nicest thing to hear. But they figure that they can take a lesson from Catch-22’s Doc Daneeka: If everyone describes you as such and treats you as such, then perhaps that’s who you really are. As they’ve accepted that truism, the Bad Guys have unwittingly fulfilled the stereotypes everyone’s lumped them into. In fact, those prejudices are so deeply rooted within themselves that they take insults as compliments—as if they’re being acknowledged for perfecting their predetermined craft.

But just how predetermined is their craft? It’s the culture which has told them to be bad because that’s how animals of their type are. What if Wolf doesn’t want to be the bad guy anymore? What if he was able to change and be a good guy? Even after that, would anyone in the city believe him, or would they just continue assuming that he’s up to no good because that’s simply what wolves do?

The Bad Guys doesn’t break any new ground when contrasted with Zootopia’s similar look into societal stereotyping and the nature vs. nurture debate. But it does introduce a new perspective into this ongoing conversation via an entertaining, family-friendly experience. While the slapstick violence and toilet humor remind us that the movie is for children, it provides a refreshing breath of air for parents who simply want a new movie with a good message that’s appropriate for their kids.

Who’d have thought that movie would center on five master thieves?