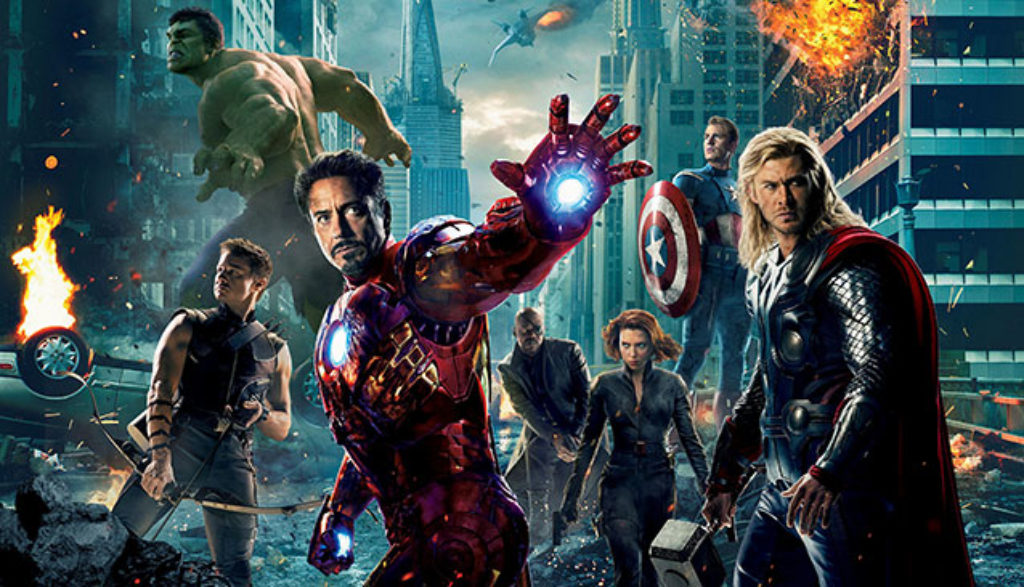 Sometimes you can judge a book by its cover.

Take Loki, pale-faced exile from the far-away world of Asgard. If you saw him walking down the sidewalk with his horned helmet and glowing spear of doom, chances are you’d nudge your neighbor and say, “He looks like trouble.” And that’s if you are safely tucked away in café booth where he can’t see you. If you’re walking toward him, you might cross (quickly) to the other side of the street.

Now, we all know jumping to these sorts of conclusions isn’t entirely fair. There are plenty of reasonable explanations as to why someone might wear horned headgear and brandish dangerous weaponry. Perhaps he’s attending a costume party. Perhaps he’s an accountant who just wants to liven things up at the office. Perhaps he’s a rich, ageless, eccentric Viking who’s been looking for his longboat the last 1,200 years.

But this is Loki we’re talking about. Even when we saw him last, in 2011’s Thor, the dude was up to no good. And if anything, he’s just torqued up the crazy since then.

His first act as an Earth tourist is to kill a whole bunch of people and destroy a massive government complex. And when one brave soul tries to tell him that we earthlings don’t want to quarrel, Loki says, “An ant has no quarrel with a boot.” Clearly, the guy could stand to read a self-help book or something. Maybe Proactive Leadership 101 or Making Friends for Dummies.

Loki’s not here to make friends, though. He’s here to humiliate his brother, Thor, crush our small planet under his iron heel and cause as much pain and suffering as he can—just ’cause he’s that type of guy. And to help him do it, he’s bringing along an extraterrestrial army.

It looks like we don’t stand a chance. Why, even a superhero couldn’t deal with this sort of threat.

Well, maybe not one. But how about six?

If you haven’t guessed, Marvel’s The Avengers is a superhero movie. So it’s nice to see that it features some fairly super heroics. The Avengers here consist of four superheroes who have already gotten their own movies: Iron Man, Thor, Captain America and the Hulk, plus a couple of add-on heroes in the form of super-spy Black Widow and the arrow-wielding marksman Hawkeye. And while they all boast their own sets of super skills, it’s not what they have that makes them heroes: It’s what they give.

And they give their all here, risking bodies, minds and souls to toss the extraterrestrial interlopers out. Even Tony Stark/Iron Man, the most overtly flip and selfish of the lot, never shies from putting his metal-clad self in danger (and even confronts Loki without his nifty suit at one point). His self-sacrifice is the most obvious, but any one of these heroes would pay the ultimate price to give the rest of us an extended lease on life.

It’s not just their penchant for literally fighting the good fight that makes them heroes, though. It’s in the smaller, less-frenetic side stories too: Black Widow trying to rescue Hawkeye from Loki’s mind-scrambling powers; Thor pleading with his brother to stop with the warmongering already and reconcile with him; Bruce Banner, Hulk’s mild-mannered alter ego, attempting to keep “the other guy” from hurting anyone who doesn’t deserve it; Captain America trying desperately to mold this collection of egos into a team.

[Spoiler Warning] In the end, perhaps it’s mild-mannered Agent Phil Coulson—a man devoid of any crazy abilities—who proves to be the biggest hero of them all. As the actual Avengers struggle to unite, fighting among themselves, Coulson’s forced to face Loki alone—a confrontation that doesn’t end well. But even as he’s dying, the man is unbowed.

“You lack conviction,” the agent tells him, and fires off one final shot.

To his dying breath, Coulson is convinced—and convicted—that the Avengers can be the heroes the world needs them to be. And, in part through his sacrifice, they became just that.

Loki and Thor are both repeatedly referred to as “gods.” And much is made of their power and near-immortality. But as we learned in Thor, this characterization is misleading. Thor is an alien being with powers that are much greater than humans’. But he’s not really a god, and when the word god is used here, it’s qualified, as when Black Widow tells Captain America that Thor and Loki are “basically gods.”

Even so, Cap adds another addendum. “There’s only one God,” he tells her, “and I’m pretty sure He doesn’t dress like that.”

When Loki refers to himself as a god, the Hulk takes physical issue with the statement—picking him up and pounding him into the floor, like a 5-year-old with a Raggedy Ann doll. “Puny god,” Hulk says dismissively.

Elsewhere, the Avengers want to get their hands on a cube of mysterious and limitless power called the Tesseract, and some treat the cube as if it were divine itself. “It’s more than knowledge,” Selvig, a scientist, says. “It’s truth.” That said, Selvig’s mind is under the influence of Loki at the time, so it’s hard to know whether he means it or not.

A reference is made to yoga. We see religious iconography from various religions. Tony name-checks the prophet Jonah.

Black Widow and Pepper Pots, especially, are dressed in tight, sometimes low-cut clothing. Stark and Potts (his assistant/love interest) kiss, and Pepper appears to whisper something suggestive in his ear. Tony tells her, “Call your mom. Can you bunk over?” A joke is made about a “performance issue.”

After the Hulk turns back into Banner, we see him sitting in a debris field, sans clothes. He pulls pants on after someone observes that he’s “buck-a‑‑ naked.” (We see his legs and torso.)

The Avengers focuses on a bunch of superfolks who, essentially, fight for a living. We see people get punched, kicked, thrown, bashed, smashed, clunked, clinked, pounded, kneed, stabbed, shot (with arrows, bullets and ray guns) and vaporized. There are multiple massive fight scenes, and the climactic battle seems to last for about 45 minutes (probably an exaggeration, but not by much). We see cars crash and weird spaceships smash into buildings. There are explosions galore.

When we’re introduced to Black Widow, she’s tied to a chair for the purpose of being interrogated by a Russian general and his goons. A man slaps her across the face, and the general walks toward a table filled with instruments of torture. He says she’ll need to deliver a message to someone, then he picks up a pair of pliers and says, “You may have to write it down,” suggesting he plans to pull out her tongue. Black Widow promptly turns the tables, beating up and knocking out the majority of her interrogators (mostly while still tied to her chair). She leaves the general dangling over a pit with his leg bound by a chain.

Loki stabs, slices and obliterates a number of scientists and security guards. While we see no blood, the confrontation feels harsher than many of its superhero showdown peers. And it’s nothing compared to what happens when Loki crashes a swanky German party, tosses a bigwig down on what appears to be an ancient altar and jams a frightening-looking instrument into his face. (We see the man writhe and hear him scream.) Loki grins maniacally as the torture progresses—spurred on by the horrified panic of the onlookers.

We learn later that Loki’s killed 80 people in two days. And he threatens to do so much more than that to so many more people. When he stabs one man in the back, we see the blade protrude from his victim’s chest.

We learn that Bruce Banner tried to kill himself—he shot himself in the mouth, he says, but “the other guy” (the Hulk) spit the bullet out.

Tony and Pepper sip champagne, and Tony offers Loki a drink before pouring himself a glass of whiskey. Tony asks Bruce if he stays under control with the help of “a huge bag of weed.”

Characters lie and mislead. A quip is made at the expense of adoption.

Early on, we learn that the so-called “Avengers Initiative” was scrapped because the personalities in play were too volatile, too unpredictable and too wounded. It makes sense. I mean, who in his right mind would trust the safety of the world to a narcissistic, self-destructive businessman; a scientist who turns into a monster he can’t really control; a quaint hero from World War II; and an otherworldly demigod who may or may not show up?

But as every Christian knows, flawed folks can make a big, and positive, difference in the world around them. Everyone can contribute. And it’s our differences that make us strong. Equally Christian is the idea that the Avengers are battling to preserve mankind’s God-given freedoms. The freedom to think for ourselves. The freedom to make our own choices … even when those choices aren’t God-honoring. Loki believes that it’s our pursit of freedom that enslaves us. That we can only be happy when we’re subjugated to a god (like him) who would take away our free will. Fury and his fighters will have none of that.

The Avengers, of course, is not a Bible lesson. It’s a movie, and a violent, imperfect one at that. We hear flurries of foul language. We watch a woman being tortured—and then bash her way back to freedom. And while we can’t excuse those things, we still see something pretty instructive when these disparate characters begin to find a way to work together for a common good—when Tony Stark sets aside his selfishness and follows orders for once in his life, when Hulk focuses his attention (mostly) on the bad guys instead of the good ones, when the team as a whole risks so much for such a noble cause.

Marvel’s The Avengers is a rollicking, bust-your-eardrums loud, take-no-prisoners actioner. It’s clearly a suitable movie to open the popcorn season of summer, considering the standard that’s been set for such events. Unlike so many other tent-pole summer flicks, though, this one has a bit of substance, a bit of soul. And that’s super nice to see.