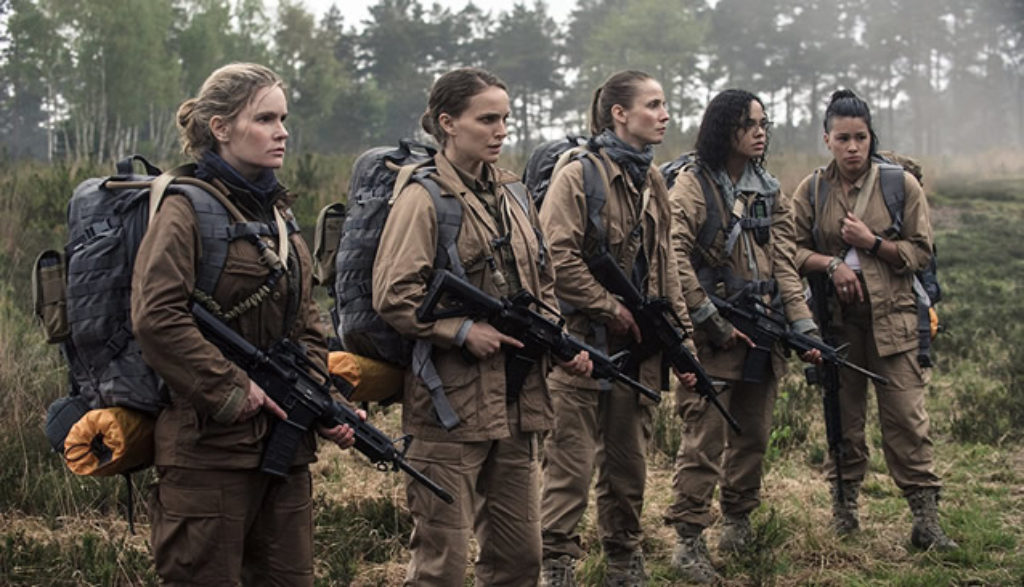 It came from above.

It pierced a lighthouse, impregnating an unsuspecting planet with something unimaginable. A womb of sorts grew from the wound, hidden behind a shimmering membrane of light and rainbow. And in that womb grew life … and death.

The world outside is mostly heedless at first. But a handful of government officials, military personnel and scientists are in the know. They’ve set up a base of operations to watch the shimmering bubble—growing slowly by the day—and to explore what lurks inside. But it’s hard to come to any conclusions about the strange phenomena when there’s so little data. Dr. Ventress says that it could mean—or be—anything: “A religious event, an extraterrestrial event, a new dimension,” she speculates. “We have many theories, few facts.”

Facts don’t come easily beyond the kaleidoscopic curtain of luminous light—not when everything sent in never returns. Drones, robots, animals, people … it doesn’t matter. Once they step inside that membrane, they don’t come back.

A year ago, Kane slipped through the veil of what the scientists have dubbed “the Shimmer” with a team of highly-trained operatives, bent on exploring the place and bringing back all the information they could. He was the only one who returned, and he came back … different.

Kane somehow finds his way back to the home he shared with his wife, Lena. He recognizes Lena as she runs into his arms and laughs and cries and holds him tight. But he’s strangely passive. Distant. He says nothing about his mission, about how he got home, about … anything. And when he takes a sip of water, blood seeps in, swirling in the currents of the glass.

Then the convulsions start.

Lena and Kane head to the hospital, but they’re hijacked on the way by a bevy of black SUVs with flashing red and blue lights. They take Kane and render Lena unconscious. She wakes up in a base set up near the boundary of the ever-expanding Shimmer. Dr. Ventress explains what little she can about what little she knows about the Shimmer. Lena’s husband, it seems, is dying of multiple organ failures.

Now Ventress is preparing yet another team to dive into the Shimmer—a team primarily composed of scientists. They’re all women, by happenstance, and they hope to get some answers where the military men who went in before failed. And Ventress, a psychologist who’s grown weary of sending people through the Shimmer who never return, will go in herself this time. She wants answers.

And you know what? Lena wants answers, too. She volunteers to join the team. She’s a college professor: a biologist who specializes in cancers. She’s ex-military: a seven-year Army vet with the skills and attitude to keep herself alive. And for her, it’s personal: Her husband came back, but came back so changed. She wants to know why.

There’s something more, too. When asked later why she volunteered, Lena answers simply, if evasively.

But as Lena soon discovers, going through the Shimmer is a hard way to pay off debts.

You can’t fault the bravery of the folks who go into the Shimmer. They all want answers. They need them, in fact, because the Shimmer is expanding every hour. Ventress says that it’ll eventually gobble up “cities, states and so on.” Humanity has to know what it’s up against.

And, boy howdy, is humanity up against some serious stuff. The dangers these women face are legion, and it takes some serious moxie to keep moving forward when most people’s instincts would be to run the other way. Ventress, Lena and the other members of the team do what they can to protect each other—though, admittedly, success proves to be a bit spotty.

In a flashback, Kane talks to Lena about how weird it is to see the moon in the daylight. Lena suggests that it’s as if “God made a mistake … left the hall lights on.” Kane argues that God can’t make mistakes, but Lena insists that He has and does. She talks about the nature of cell reproduction—how each cell should, technically, be immortal, duplicating and replicating itself for all eternity. The fact that we all get old and die is a flaw in our design, she argues: a mistake.

Lena might not be familiar with Genesis 6, where God essentially places an age limit on humankind. But I’d not be surprised if the filmmakers knew about that key passage, given the pervasive sense that behind the Shimmer, both Eden and Armageddon are simultaneously coming into being. And it seems that the intelligence (if it is intelligent) behind the Shimmer uses humankind’s physical, emotional and spiritual weaknesses—its sins, if you will—for its own ends.

“Almost none of us commit suicide,” someone tells Lena, talking about humanity in general. “Almost all of us self-destruct.” Indeed, we see that almost everyone who is a part of Lena’s team has engaged in various acts of self-destruction: Some are recovering drug or alcohol addicts. One engaged in self-harm. Another had an affair. For them, perhaps the mission within the Shimmer represents an opportunity for redemption … or simply a way to make their own self-destruction complete. It’s interesting, too, in light of all of this, that Kane’s name is what it is—a possible allusion to the biblical character of Cain, who self-destructed by destroying someone else.

Lena bears a tattoo of a figure-eight snake eating its own tail—an ancient icon (found in multiple religious and historical traditions) symbolizing the cyclical nature of life and death. Elsewhere, someone references “the end of days.”

[Spoiler Warning] Without getting into too much detail, the movie’s ambiguous conclusion contains another echo of Genesis, a nod to the story of Adam, Eve and the destructive forbidden fruit.

As mentioned, Lena and Kane are shown in flashback, lounging in bed. We see her in her underwear (a thin top and pair of panties), and Kane tickles her. From the dialogue we gather that they have sex after the camera leaves.

But Lena also has an affair with a fellow professor. Twice we see her bare back (and a bit of side breast) during sex. Her male partner is shirtless as well. Lena seems emotionally detached during the tryst. Afterward, she breaks off the affair, telling the man that she believes Kane knows about it. Her illicit partner tries to talk her out of it:

Later on, we witness scenes that could be taken as procreative unions of sorts, though none are explicitly sexual. Anya, one of the women on Lena’s team, is a lesbian who is looking for a new relationship. Clothing-wise, the women’s tops reveal some shoulder and cleavage.

The world on the other side of the Shimmer spawns strange hybrid creatures. And some of them really, really nasty. Warning: Spoilery descriptions follow.

A gigantic bear-like thing tears through a perimeter fence and attacks a team member, who screams as she’s pulled into the dark. Lena later finds the woman’s body, her throat torn out. The bear attacks again and kills another team member, ripping off the woman’s jaw. (We also glimpse that woman’s mangled corpse.) The women eventually gun the thing down—bullets peppering the bear-creature’s skull until parts of it are turned into a pulpy mass of gore.

A massive albino alligator attacks a team member, pulling her into the water. She escapes while the alligator is pounded with dozens of rounds of ammunition, mutilating its carcass. Team members pry open the dead animal’s jaw and discover rows of teeth, like a shark’s, embedded inside.

Despite some initial success at staving off these beasties, the force inside the Shimmer infects everything eventually. And the humans who invade that space carry that infection like a super-disturbing and rapidly mutating cancer.

In perhaps the movie’s most disturbing scene, Lena and her teammates watch a video of the team that went in before them: A man takes a knife to another man’s belly and carves it open—pulling down the flesh-flap to reveal a mass of squirming … what? Intestines? Snakes? A combination of both? We see the man who did the cutting smile and wash his bloody hands in shallow water, the knife drifting down in the liquid. Soon after, Lena and the team come across the “body” of the man who was sliced open: It almost looks as if it exploded on the wall of a largely empty swimming pool, with tendrils of alien life spreading across the wall like roots or veins. The man’s skull is frozen well above where it should be, suggesting that some virulent force forced it out and away from his neck.

Lena comes across the corpse of a man who apparently blew himself up with a grenade. Another grenade goes off, burning and apparently killing things. Skulls and skeletonized torsos are set up in an apparent pattern for reasons unknown. A woman sort of explodes, or gushes, or something. Kane’s mouth leaks blood. Someone ties up several people and threatens to kill them. We hear about¬—then see—something wriggling beneath someone’s skin.

We hear about a dozen f-words, and a similar number of s-words. Other profanities include “b–ch,” “d–n” and “h—,” as well as one abuse of Jesus’ name.

Teammates drink beer around a table a few days before they’re scheduled to go into the Shimmer. As mentioned, we hear that one woman had some pretty serious alcohol and drug problems. Lena and Kane sip wine. Lena gets injected with a drug that knocks her out. Another teammate is given a sedative to help her sleep.

Lena vomits violently, an apparent aftereffect of the drug mentioned above. She also doesn’t reveal to most of her teammates that she was married to someone who had explored the Shimmer.

There’s a lot going on in Annihilation—a tense, freaky, bloody sci-fi rumination on the cyclical nature of life, death and rebirth. The invading force that the humans encounter is both cancer and creator, a threat that could wipe out all life as we know it but, in return, give the planet something altogether new. And the film talks about us, too—the “mistakes” in our cells, our propensity for self-destruction. We root for humanity here, but the film still wallows in ambiguity … not just in its ending, but in the very nature of this story’s strange, terrible, beautiful, extra-natural villain.

Annihilation is, without question, an interesting movie. It’s also, without question, really, really gross. It sets before its viewers grotesqueries designed to burrow deeply into your memory, just as its colorful cancer burrows deeply into its victims. Once you see someone’s innards writhing around like a bunch of worms, you can’t really unsee it. Once you hear a human scream come from the maw of an inhuman monster, you really can’t unhear it.

This movie, to both its credit and detriment, creates indelible moments—including nightmarish images that might just give us new visions of what hell could look like.