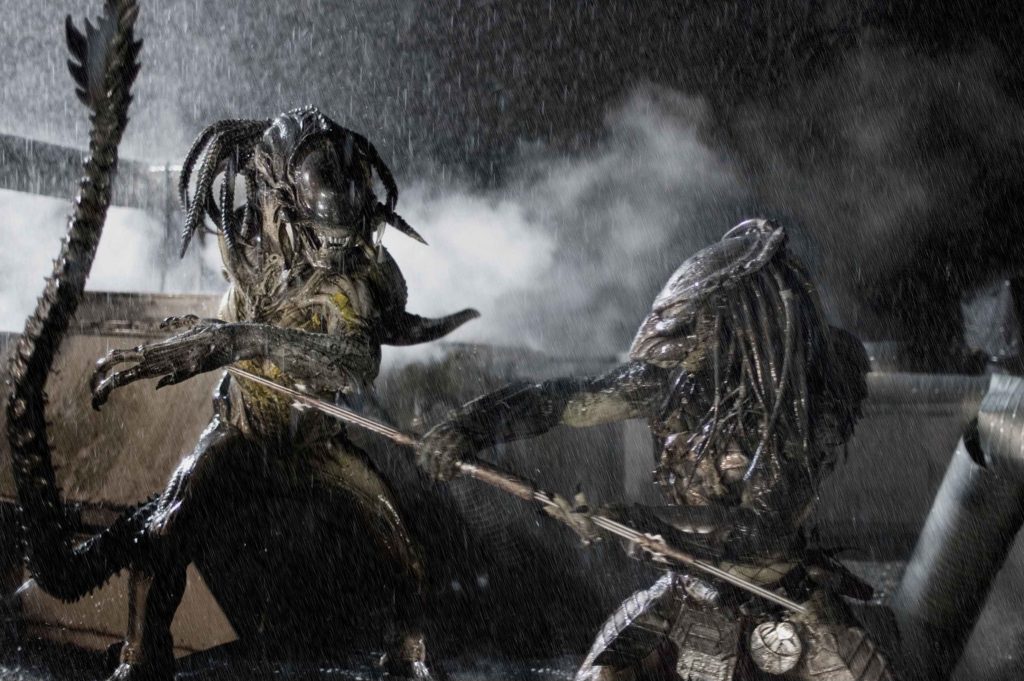 Billionaire industrialist Charles Bishop Weyland funds a polar expedition when satellite photos reveal an enormous pyramid buried 2,000 feet beneath the ice. As his team of scientists and archaeologists arrives in Antarctica, so do space ships carrying three Predators—heavily armed, armor-clad creatures who use the constantly transfiguring pyramid as a training facility. Their rite of passage involves battling wall-crawling, acid-spewing, bug-like Aliens spawned for their hunting pleasure by an Alien queen held captive and forced to lay the eggs that, after gestating in human hosts, become their prey. (Guess who become the human hosts.)

What stands out about Alien vs. Predator isn’t its face-off between slime-dripping, skull-crunching Aliens and steel-taloned, invisibility-cloaked Predators. It’s the movie’s rating. Since 1979, these extremely violent horror franchises have yielded a total of six R-rated hits between them (Alien, Aliens, Alien 3, Alien Resurrection, Predator and Predator 2). The decision to merge these sci-fi/horror properties into a PG-13 film is an obvious attempt to profit from the milder rating. With a few choice edits and the charity of the ratings board, 20th Century Fox got its violence and its “teen-friendly” label.

The explorers are led by environmentalist and expert ice climber/guide Alexa Woods. She’s brave and loyal (“When I lead my team I don’t ever leave my team”). She’s also the voice of reason who thinks it foolish to run headlong into the potentially dangerous unknown out of pride and greed. One of her colleagues courageously saves her life, only to lose his in the process. Technical engineer Graeme Miller is proud of his young sons and, in the midst of dire circumstances, tells another father that having families to return to relieves them of “the luxury of quitting.” [Spoiler Warning] A Predator shows mercy to a man with a weak heart who is not deemed a threat. Realizing the global stakes in the Alien/Predator battle, Alexa and Sebastian conclude, “The enemy of my enemy is my friend,” indicating that unlikely alliances are sometimes necessary to accomplish the greater good. Also, Alexa’s defeat of an Alien earns her a Predator’s respect.

The film’s sci-fi premise states that, before relocating to outer space, a society of Predators inhabited the earth and influenced cultures including the Egyptians, Aztecs and Cambodians. Those nations worshipped those creatures as gods and willingly sacrificed themselves for the production of Alien offspring (glimpsed in flashback). When the salvage team stumbles upon a cache of Predator weapons, Miller compares it to “finding Moses’ DVD collection.”

Despite some creative editing that cuts away from gruesome moments in the nick of time, there’s still a lot of brutality to give families pause. [Editor’s Note: What follows is fairly descriptive to help parents understand the film’s abuse of the PG-13 rating.] The Predators’ arsenal includes guns, spears, flying cutlery and more. One man gets stabbed in the stomach by huge, retractable claws which emerge, bloodied, through his back. Another is strangled with a noose. Yet another victim succumbs to razor-sharp netting that bores into his flesh until he is finished off with a spear (blood trickles down the shaft). Dead men are hung from the ceiling as trophies. Just as a Predator slashes at its human prey, the camera cuts away to show blood spatter in the snow. With deadly aim, a Predator hurls a spear which pins his target to a wall. (We see the man dangling a foot off the ground.) Predators toss men around, hurling one into a deep hole. One of the intergalactic hunters slices a “face-hugger” in half, breaks the neck of a newborn Alien, and decapitates and skins a mature one.

The Aliens get brutal, too. Newly hatched face-huggers leap onto the faces of their victims and dispatch an Alien embryo into the person’s esophagus. Those critters grow until they eventually burst forth from their living hosts’ abdomens. A woman writhes in pain, torso bulging (the camera cuts away just as the Alien emerges). Several people are shown with gaping exit wounds. Alexa shoots one of her colleagues to spare him the agony of “giving birth.” Aliens wound one another, using their acid-blood to burn through their queen’s shackles. A full-grown Alien penetrates the skull of a Predator, killing it. On several occasions they drive their sharp tails through the bodies of their enemies. In a flashback, swarms of Aliens and Predators fight each other until a nuclear-size blast annihilates everything.

Alexa uses the f-word once, and starts to say “muthaf—–” before the second half of the obscenity gets drowned out. There are also exclamations of “oh god,” seven s-words and a few milder profanities.

Alexa reminisces about drinking champagne with her father after scaling a mountain. Weyland inhales medication of some kind.

Finding a logical way to tie together two independent sci-fi franchises (set in different centuries, no less) is no easy task. Purely from a story perspective, writer/director Paul Anderson has done an admirable job of connecting the dots. Some straight-out action sequences are impressive, too, and AVP’s ending contained an element of surprise. But that’s about all the praise this film deserves.

The biggest problem is the level of violence crammed into a PG-13. The MPAA may have pardoned some of the brutality because it occurs between monsters. (Predators bleed neon green. Aliens bleed acid. Seeing the two duke it out is a lot like watching a video game.) Even so, the highest body count remains human, and it gets graphic at times. Not that that’s stopped hard-core fans of the Alien and Predator series from arguing that this entry doesn’t go far enough to deliver the chills, thrills and gross-outs they’ve come to expect. One online film critic stated with an air of disappointment, “The action cuts away in moments of extreme violence.” Then he admitted, “but there are a good number of on-screen impalings, and for a while I did forget I was watching a PG-13 film.” Ditto.