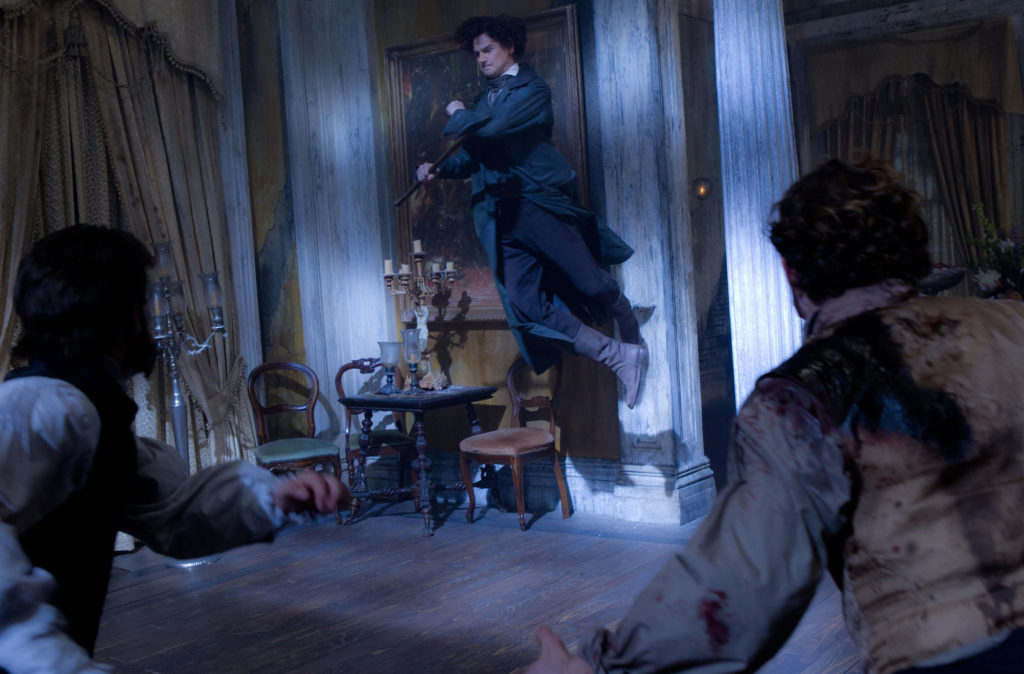 You’d think that, in the midst of planning war strategies and writing policies and giving speeches and doting on his kids and reprimanding his generals and brushing that awesome beard of his, he’d have little energy or inclination to battle the fanged undead too.

Not so, according to Abraham Lincoln: Vampire Hunter, which suggests that our 16th president shared more in common with Van Helsing (the guy who killed Dracula) than Van Buren (the president with the bushy sideburns). For this ax-swinging Lincoln, the highest office in the land was little more than an afterthought.

Not that he initially thought about being a vampire hunter. Lincoln just wanted a little eye-for-an-eye retribution—to kill the slave trader who murdered his mother. But when Lincoln plants a bullet in the man’s head and out sprouts a forest of fangs … well, Abe gets an inkling that revenge is a dish best served to the cold. If it can be served at all.

So under the tutelage of the mysterious Henry Sturgess, Abraham puts down the gun and picks up an ax—a silver-coated hatchet that he learns to wield like a lumberjack ninja and whirl like a top-hatted majorette. Before long, he finds himself in Springfield, Ill.—a city with a serious vampire-infestation problem.

But just like many English majors today, Abe discovers that his training doesn’t pay the rent. And so he has to get a job as a store clerk, relegating his hunting to the nighttime. It’s just as well, for he must keep his penchant for vampire hunting a secret. Most folks don’t believe in vampires—not in the enlightened 19th century—and they might ask some problematic questions when they inevitably notice some of Springfield’s leading citizens getting, shall we say, the ax.

But a storm’s a-brewing south of Springfield—a storm by the name of Slavery. Seems the country’s vamps love the institution because the slaves keep them (quite literally) fed, fat and happy. And Lincoln begins to wonder … could he do more to push back the country’s vampire plague through more legal means? Is it possible that the pen really is mightier than the ax?

This filmmakers allow that it’s possible … but mostly stick with the ax since you can’t snag the fanboys with the Gettysburg Address.

Seth Grahame-Smith, who wrote both the screenplay for Abraham Lincoln: Vampire Hunter and the preceding book, uses vampirism as a metaphor for the evils of slavery—a practice that (in the film’s case, almost literally) is sucking the life out of the United States. Thus, Lincoln is shown as a true hero, thwacking the heads off evil vampires and choking the life out of the slave trade with every nocturnal hunt.

It’s in the use of this metaphor that the film is at its most successful. Through this surreal reimagining we see glimpses of some of the genuine moral struggles in play leading to and during the war between the states. Before the Civil War (and the war on vampires) begins, we hear people excuse slavery as an unfortunate necessity: Isn’t the slave trade sating these undead monsters below our borders? Isn’t the peace we enjoy because of slavery worth the cost? And then, when the war begins and claims the lives of many a Union soldier, cries go out from across the country, begging for the bloodshed to stop.

But Lincoln and his allies can’t bear a retreat—physically or morally. “I wouldn’t back away from what’s right because it’s hard,” Mary Todd Lincoln tells her husband. And when we hear that the coming fight is “a war for the soul of the country,” we know that’s true—even without the vampires hanging around to drive home the point.

Many of the film’s lines ring with 19th-century idealism, be they from the mind of Grahame-Smith or quotes pulled from Lincoln’s own speeches and writings. And we see Henry force revenge-minded Abe to focus on the bigger picture, telling him, “Real power comes not from hate but truth.” Throughout, we see people stand together and fight for something well worth fighting for: “A nation of men, not monsters.”

Vampires have historically been considered spiritual abominations, and you often get a sense of that here. Silver is about the only thing that’ll harm them in this film, and the metal’s power (we’re told) stems from the 30 pieces of silver Judas accepted to betray Christ. We’re also told that vampires can’t kill or hurt each other (a trope fulfilled inconsistently onscreen), which one vampire suggests is God’s little joke on the undead.

One age-old vampire is referred to as Adam, and he lives on a plantation called Eden. He’s an atheist, though, telling Lincoln that men have been selling one another into slavery ever since they “invented gods to forgive them for doing it.”

The movie begins by quoting Genesis 17:5 (“Your name will be Abraham, for I have made you a father of many nations”). We hear the beatitude, “Blessed are the pure at heart, for they will see God.” One of the vampires suggests that pure at heart humans can’t be turned into vampires. But pastors can be, we’re told. And we see ministers marrying and burying people. Churches are shown as places of refuge. God’s name is sometimes reverently invoked.

When Mary Todd is asked why she dates someone as dowdy as Abe, she says, “Common-looking people are the best in the world; that’s why God made so many of them.” (It’s a phrase said in real life by Lincoln himself.)

Henry is shown having noisy sex in a bathtub. (We see the woman from the back.) Abe discovers a dead, bare-breasted woman.

Honest Abe is less a statesman and more a 300-style warrior here, hacking his way through legions of undead as if the battle were a ballet. His first encounter with a vampire as a full-fledged hunter is perhaps the most horrific. The monster opens a trap door underneath Lincoln, who falls through and winds up hanging upside down in a secret cellar, lassoed by his ankles. Corpses hang all around him, most drained of blood (streaks of it staining skin. The vicious vamp then sets a pan beneath Abe—in preparation to drain the future president too. Lincoln works his way free, naturally, slicing the guy twice across the throat, sending jets of black blood spurting across the room.

Most of Abe’s other battles conclude much the same way: slice, hack, decapitate (repeat). Variations on the theme include Abe dunking a vamp’s head into what appears to be molten metal, punching through a guy’s midsection with a silver watch and using a train car door to do the hard beheading work instead of his ax. He and other cohorts shoot vampires as well, with lead balls lodging in, say, a creature’s eye socket. Sometimes we see Abe bury the grotesquely mutilated bodies of his fallen foes.

A vampire dies after being shot in the forehead with a silver necklace. (The necklace charm hangs outside the wound.) Another has his brains gorily blown out. Abe is bruised and bloodied after his first big confrontation. A training session leaves blood streaming down his face. Others are bitten by vampires. (Sometimes the beasties bite down in the “traditional” way, with blood covering the victim’s neck and coating the killer’s mouth, cheeks and clothes. Other times, vampires merely prick the wrist of victims, a nibble that’s designed to kill slowly as veins discolor and odd sores appear.) One victim, after a particularly vicious attack, still stands, sun shining through a gaping hole in his chest. A fashionable vampire ball ends in a bloody massacre of the slaves and Southerners who’ve been invited to attend.

Two young boys are whipped; one begins to bleed. People are threatened with guns and knives. Folks fall off cliffs. Trains crash and burn. Civil War battles show people getting mowed down by gunfire or sent careening through the air by cannonballs. Someone’s thrown up against the side of the wall, doing more damage to the building than the person.

A vampire smokes a long, elegant pipe. Another drinks a red liquid from a decanter. Lincoln gets drunk at a bar, trying to steel himself to kill someone. Much later, another man does exactly the same thing. Other folks are shown frequently downing whiskey or wine.

Abe never honestly tells his wife about his nocturnal exploits; she has to find out about them by reading his secret diary. A shopkeeper threatens a former worker, telling him he’ll use his scrotum as a coin purse.

“History prefers legends to men,” we hear Lincoln say near the beginning of the movie. “It prefers nobility to brutality, soaring speeches to quiet deeds. History remembers the battle, but forgets the blood.”

This sums up the paradox of Abraham Lincoln: Vampire Hunter.

I wasn’t expecting to have much good to say about the movie. I thought it’d be a silly, sloppy, one-joke, thought-free movie easily dismissed. So imagine my surprise when this ax-wielding Abe actually says some pretty cool things and—even in this very surreal world he’s set in—still stands for many of the same principles the real Lincoln stood for. We hear a great deal of talk about freedom and justice and truth … which makes this something of a rare movie in the midst of its R-rated undead-devoted peers. Few others are this sincere about subjects this significant.

But if what we hear is often fairly positive, what we see—well, that’s another matter.

We see a bit of nudity, a coffin full of brutality, and lots and lots of blood—of the red and black varieties. We see a film that doesn’t so much run through its 105 minutes as it hacks and slices and dismembers its way through.