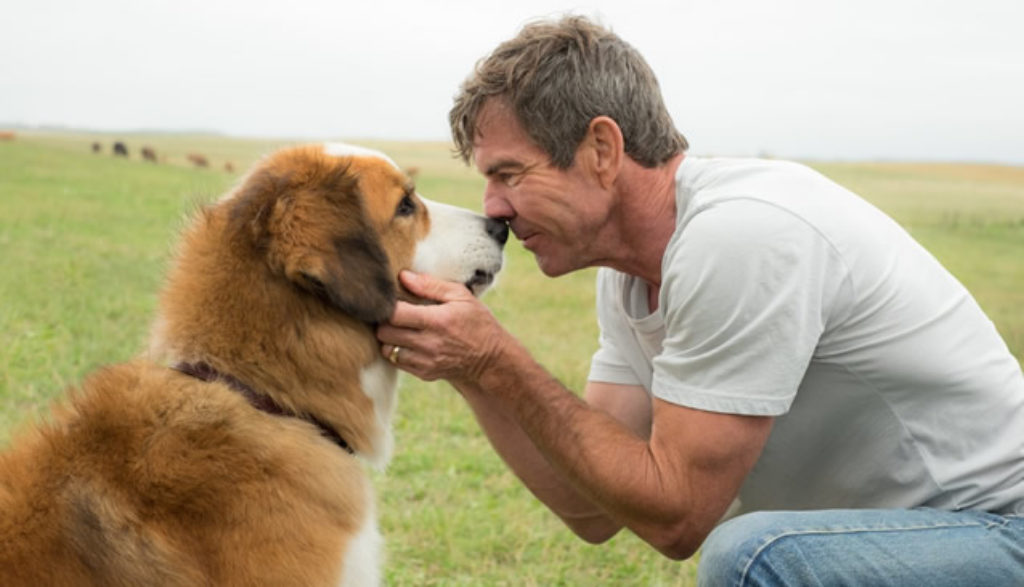 “What is the meaning of life? Are we here for a reason? Is there a point to anything?”

These questions have occupied seekers, mystics, theologians and philosophers for millennia. And, it turns out, a curiously contemplative pooch named Bailey, who voices those exact questions at the outset of A Dog’s Purpose, the tail, er, tale of a remarkable canine’s quest to sniff out the meaning of his life.

The dog’s first life—and it’s a brief one—ends with his euthanasia in a pound almost as soon as it’s begun. Just like that, though, he’s back, mysteriously reborn in a new furry body … but with the same unique, self-aware consciousness he had the first time around.

The pup’s second life is nearly just as short, as the men who find him unwisely lock him in a sweltering truck. But he’s rescued (in the late 1950s) by a feisty woman and her son, who break a window to retrieve him. Soon the dog, named Bailey, has a permanent home with the Montgomery family.

Bailey cunningly engineers a meeting between Ethan and the young of his young life, for example, a girl named Hannah. Bailey likes the young woman too, adding, “Plus, she smells like biscuits.” But he’s unsure why Ethan’s always looking for food in Hannah’s mouth. “He never found anything,” Bailey muses about the pair’s frequent smooching. “And he looked a lot.”

It’s an idyllic life for Ethan, who goes through high school and eventually gets a college football scholarship, and Bailey, who’s been there every step of the way.

But idylls rarely last. And neither do dog’s lives—even when they live for decades. A tragedy shatters Ethan’s dreams. And Bailey, well, his faithful, furry days eventually come to a bittersweet end.

Except that … they don’t.

As Bailey’s many lives and the decades they span stack up, occasionally he wonders what ever became of Ethan. And Hannah. And their lives. Until one day at the dog park, as a lonely, bedraggled and abandoned stray, the perpetual pooch catches scent of something … familiar.

Perhaps now, after all these years and lives, Bailey can finally discover the purpose he’s sought for so long.

A Dog’s Purpose is ostensibly about Bailey’s attempt to find meaning throughout his many lives. But the meaning he eventually articulates applies equally to us humans, too. Bailey’s final philosophical statement about his purpose encompasses a canine combination of carpe diem (“Have fun!” he advises), sacrificial service (“Save the ones you can save”), delightfully sloppy affection (“Lick the ones you love”) and being present in every moment (“Just be here now”). There’s nothing inherently spiritual about Bailey’s philosophy of life, but it doesn’t glaringly contradict Christian orthodoxy either.

The film poignantly illustrates how much we need love, affection and companionship—both the kind a dog can provide as well as the kind that we really need other humans to bring. Bailey says early on, “Every night as I fell asleep, I thought of how happy I was that I had an Ethan.” Another incarnation of Bailey is owned by Carlos, a police officer who’s apparently lost his wife (whether to death or divorce is unclear). Carlos is obviously in mourning, and Bailey does his best to cheer him up. But it’s clear that there’s only so much the dog can do to help the man through his aching loss.

Likewise, college student Maya is somewhat socially awkward. And though she longs for marriage, she tries to convince herself—successfully for a time—that the love of a dog is enough for her. But she eventually finds a man to marry (who has a female dog of his own whom Bailey adores).

As for Ethan, the tragedy he experiences as a young man is one that he’s never gotten over. Decades later, Bailey’s return (as a different dog, obviously) becomes the catalyst that helps heal Ethan’s broken heart. The dog plays an important role in coaxing Ethan into giving love another chance.

Reincarnation is obviously a central plot device in A Dog’s Purpose. Bailey comes back over and over and over again, reborn repeatedly into the bodies of different kinds of dogs. But his consciousness is always the same, and he retains memories from previous existences.

The film never offers any real spiritual explanation for Bailey’s various canine iterations. It never even uses the word reincarnation, nor does it delve into the Eastern worldviews (such as Hinduism or Buddhism) that typically espouse the idea of deceased creatures being reborn as something or someone else. What’s more, it’s never hinted at or insinuated that humans might have multiple lives. Nor, it seems, do any of the other dogs in the story.

Bailey plays a role in introducing Ethan and Hannah by running up to her and shoving his snout up her skirt. Ethan and Hannah kiss on several occasions, and some of the kisses are quite passionate. We see them swimming together in conservative bathing suits, and she wears a tank top elsewhere. As noted, Bailey continually makes comments about them “licking” each other.

In one incarnation, Bailey’s somewhat shocked to discover that he is now a she: “What?! I’m a girl?” In another life, Bailey (now male again) is quite taken with a female dog.

Elsewhere, we see several college couples kissing. A young woman’s head is visible as she takes a bubble bath. A snippet of the ’80s TV drama Dynasty shows a woman wearing a dress with a plunging front. A woman’s wedding gown is a bit revealing.

A jealous rival of Ethan’s (whom Ethan hits during an argument) drops fireworks through the family’s front door mail slot, resulting in a terrible fire. Everyone manages to escape with their lives, but Ethan’s injured in the process.

It’s suggested that Ethan’s father is an alcoholic in part because of his obsessive anxiety about nuclear destruction. He fixates on the Cuban Missile Crisis (reading about it in the paper) and tells his adolescent son, “We’re three seconds from annihilation.” At one point, he pushes his wife down to the ground harshly, prompting Ethan (who’s in college at that point) to spring to her defense and demand that his dad leave.

Another tense scene involves police officer Carlos and his dog (who’s a trained K9 animal) pursuing a man who’s kidnapped a young girl. The dog rescues the girl after she’s tossed into a raging spillway near a dam. The dog also saves Carlos from being shot, but gets hit by a bullet himself, ending his life. (We see a bloody wound on the dog’s side.)

An impoverished woman adopts another version of Bailey, but her partner (it’s unclear whether they’re married) despises the dog and treats him cruelly, chaining him up outside even in very cold weather.

A slapstick scene involves Bailey tripping guests, with one woman plunging into food on a table. Two women in a Dynasty snippet on TV get into a tangle.

The deaths of various versions of Bailey are generally fade-to-black scenes, followed by a brief dreamy sequence before the dog gets a new life.

Ethan’s mother exclaims “Oh my god!” when she realizes the house is on fire. There may be one other indistinct misuse of God’s name in a dramatic scene. We hear about half a dozen uses of “oh my gosh.”

Ethan’s father is an alcoholic. We see him drinking beer as well as sipping from a flask. He watches TV, obviously depressed, with several beer bottles and cans around him. His addiction grows gradually more pervasive throughout the unfolding of Ethan’s story. At one point, Bailey says of Ethan’s obviously inebriated father, “Dad always talks so loud when he smells this way.” (The family also sometimes drinks wine at meals.) Other characters drink champagne at a wedding.

Dog-related toilet humor includes Bailey swallowing a prized coin (which Ethan frantically tries to get the dog to excrete), doggy flatulence and rolling around in a pile of manure. There’s also a bit of doggy backside sniffing. Bailey exclaims at one point, “My butt itches.”

A Dog’s Purpose is the kind of movie Christian moviegoers often say that we’d like to see: a sweet story that doggedly avoids gratuitous content. Granted, there’s a hair or two of mild concern, mostly in two perilous scenes that might be on the intense side for the littlest viewers, as well as in scenes that suggest a man’s debilitating alcoholism. A bit of smooching should be mentioned, too.

As for the story’s reincarnation plot device, it doesn’t seem to represent a bigger theological worldview. It’s just an imaginative way to tell this particular story. And the treatment of reincarnation here is simple enough that Christian parents could actually use it as a springboard to talk about what we believe about life after death and why we don’t believe in reincarnation.

But those minor quibbles aside, this film barks up the right tree, feeling like a throwback to a simpler time, a moviemaking era when delightful stories like this one abounded.

A postscript: In the days leading up to this film’s scheduled premiere (which was ultimately canceled), A Dog’s Purpose came under fire for leaked footage of one of the dogs apparently being coaxed against its will to jump into what appears to be raging water. Though the animal rights organization PETA has accused filmmakers of cruelty in this case, a producer for the film has fiercely defended the filmmakers and suggested that the released footage has been edited. Likewise, star Dennis Quaid has blasted the allegations as well, telling Entertainment Tonight, “It makes me angry. I never saw any abuse of any animal. And if there had been, I would have walked.”