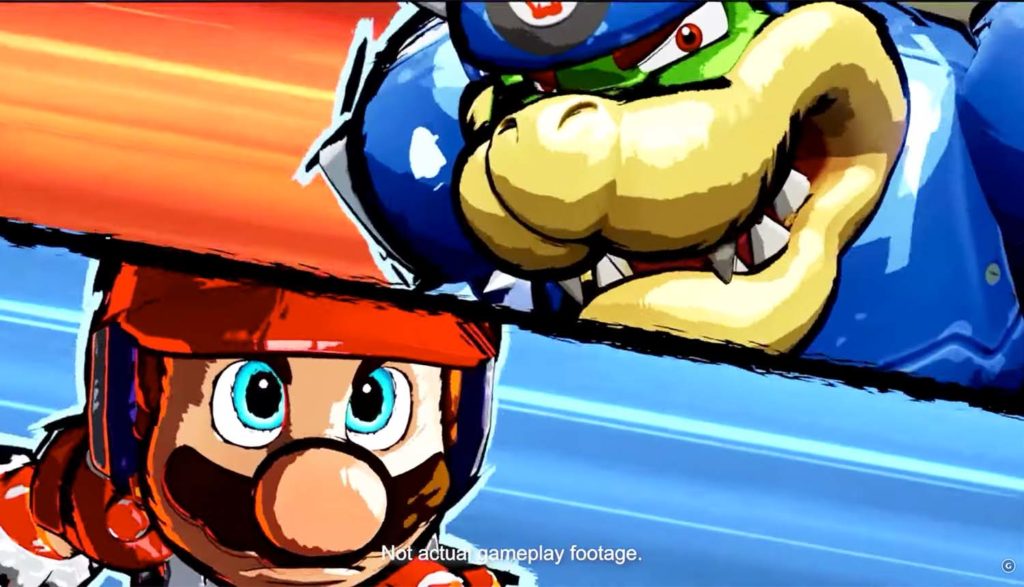 Playing a sports video game is cool when the weather outside is, uh, cool. But most of the time, if you wanna play sports it would probably be better to just go on out and play sports. It’s definitely better exercise and likely more fun.

Of course, a Mario sports game might be a decent exception.

Mario Strikers: Battle League plunks our famous, and obviously multitalented, Italian plumber and his fellows down on the soccer field: offering up what is essentially a Super Mario Kart version of a simplified four-on-four game of soccer. There’s no out of bounds here and no officials blowing a penalty whistle or handing out red cards, for example. In fact, if anything, it’s more of a knock-about, running-and-brawling game most of the time.

Players on your team are chosen from the Mario world ranks, including characters such as Princess Peach, Toad, Bowser, Luigi, Yoshi, Donkey Kong and the like. Each player has their own set of stats (for strength, speed, shooting, passing and technique). And once the ball is dropped, the goal is to, well, get it in the goal.

The next layer, however, centers on the fact that your players and your opponent’s players can tackle and bop each other at any turn—keeping downed individuals out of play for a couple seconds. And that takedown is doable whether or not the tackled player is carrying the ball or just minding their own part of the field. Of course, that pouncing attack can also take the tackling player out of position, which, if ill timed, could open the field for the opposing team.

In addition, Mario Kart-ish items such as shells, bombs and banana peels are dropped onto the field in retrievable boxes. Both teams can use these items to trip up a player or two, or maybe open a direct alleyway straight to the AI-controlled goalie. The game tends to award those boxes as a sort of self-balancing mechanism when one team or the other begins hitting repeated goals.

Mario Strikers: Battle League also offers players a chance at setting up a potentially unblockable “Hyper Strike” when a glowing power orb is randomly dropped on the field. Once the orb is grabbed, players can set up a Hyper Strike on the opponent’s side of the field if they control the ball.

Though they require a little extra time—which can be tough in a field full of bulldozing players—the Hyper Strikes use a moving-arrow power meter that determines the accuracy of the shot. A well-timed tackle or tossed item can diffuse or disarm the shot in process.

Those Hyper Strikes can also swing the progress of play dramatically since a successful shot into the net is the same as a double goal.

Passing and kicking game mechanics are smooth and easy. Players can only control one character at a time, but the AI characters work well without many noticeable glitches. And the game does a good job of balancing out item drops and goalie effectiveness to prevent matches from becoming blowouts.

There’s no negative content here in the sense of violence or language, really. Contestants are, as noted, thumped to the ground, run into electric fences or hit with shells or bombs that send them flying, but there are no permanent or messy consequences.

There are, however, some elements that might be potentially frustrating for players. That repeated tackling and character-bombing game element could irritate younger gamers simply from the fact that they can’t react quickly enough to the frenetic activity on the field. On the other hand, single-player AI-controlled play can almost feel too easy sometimes. (On the plus side, that can actually ease players into tougher action. But the game offers difficulty settings that can be tweaked to your satisfaction.)

You know, the only thing I haven’t seen Mario do well is fix a sink. But this little plumber’s games are generally pretty well balanced and fun. And you can add ramming around a field and kicking a soccer ball to that list.