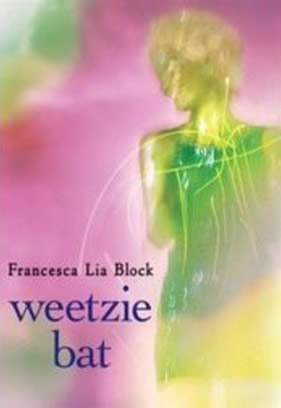 In Weetzie Bat, by Francesca Lia Block, a young woman of the same name lives in a dreamlike version of Los Angeles. When a genie gives her three wishes, she finds herself in a whirlwind of love, loss, movies and babies. This is the first book in the “Dangerous Angels” series.

Weetzie Bat is a young woman living in a magical version of 1980s Los Angeles. Obsessed with the glamour of 1950s Hollywood, Weetzie dresses the part. She’s thrilled to meet a classmate, Dirk, who shares her style and love of the time period. The inseparable pair often hangs out with Dirk’s congenial grandmother, Fifi.

When Dirk admits he’s gay, Weetzie is unfazed and says they will help each other find true love. Fifi gives Weetzie a magic lamp with a genie inside who offers her three wishes. Weetzie asks for a “duck” (a perfect boyfriend) for Dirk and a true love for herself whom she calls “My Secret Agent Lover Man.” Finally, she requests a beautiful house in which they can all live happily ever after.

Her wishes begin to come true. Fifi dies and leaves her house to Weetzie and Dirk. Dirk meets a surfer named Duck, who moves in with them. A man flirts with Weetzie at the diner where she works and says he wants to put her in his movie. She balks, until he says his name is My Secret Agent Lover Man. Yes, it’s a weird name, he admits. But Weetzie knows her wish has come true.

My Secret Agent Lover Man moves in with the others. The four go out on the town and make several films together and seem to have their happily ever after. Then Weetzie realizes she wants a baby.

A mysterious woman comes to see My Secret Agent Lover Man. He admits to Weetzie he used drugs and alcohol to help him forget her when he left. He slept with a woman at a party who now claims to be carrying his child. The woman is a witch who has put a voodoo spell on him to make him sick. She says she’ll do the same to Weetzie if My Secret Agent Lover Man doesn’t give her money for an abortion. They pay her off, but she leaves a baby on their doorstep months later anyway. They decide to keep the child and call her Witch Baby.

Weetzie’s dad dies of a drug overdose. Then Duck learns one of his friends is very sick (presumably with AIDS). Duck runs away, leaving a note that says he doesn’t want to kill Dirk just by loving him too much. Dirk hunts for him for days and finally convinces him to come home.

As Weetzie enjoys time with her patchwork family, she contemplates that people can live in fear or in love. Happiness may not be ever after, but she chooses happiness anyway.

Weetzie’s parents had a glamourous, romantic beginning working together in movies. After their divorce, Mom stayed in L.A. and Dad moved to New York. Mom doesn’t approve of Cherokee having three dads, but she tries to help her daughter with whatever she needs. Dad, lonely and broken, dies of a drug overdose. Weetzie, Dirk, Duck and My Secret Agent Lover Man share parental responsibilities and dote on the children.

The Lord’s name is used in vain. The s-word and “h—” also appear several times. A man hangs himself in the backyard during one of the witches’ parties.

Nearly every character, from Weetzie and her friends to Weetzie’s parents, engages in premarital sex on a regular basis. Drugs and/or alcohol are often involved. These encounters sometimes result in pregnancy, including the time Weetzie, Dirk and Duck all have sex together to conceive a baby.

Alcohol/Drugs: Weetzie and her friends frequently go to clubs and drink in excess. Weetzie’s mom accuses Weetzie’s dad of being a lush while she drinks cocktails and abuses Valium. My Secret Agent Lover Man has sex with a woman after taking drugs at a party. Weetzie’s dad suggests she and My Secret Agent Lover Man end their latest movie by having the main character die of an overdose. Shortly thereafter, Dad kills himself in this manner.

A film adaptation of this book is reportedly in the works, but no release date has been set. You can request a review of a title you can’t find at [email protected]. Book reviews cover the content, themes and worldviews of fiction books, not their literary merit, and equip parents to decide whether a book is appropriate for their children. The inclusion of a book’s review does not constitute an endorsement by Focus on the Family.