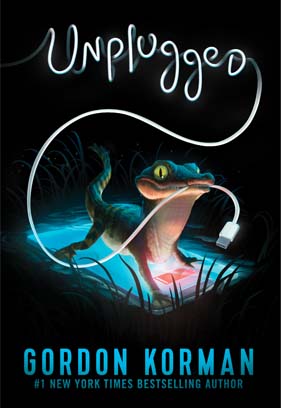 12-year-old Jett Baranov is the son of the world’s most famous tech billionaire. But he’s famous for being Silicon Valley’s No. 1 spoiled brat. And after one of his disastrous stunts, Jett is sent off to a retreat in the middle of Arkansas where he’s to remain unplugged for the summer. But when he spots something truly strange there, he has to prove that he’s more than just a troublemaker.

Being the son of a world-famous billionaire may sound like it would be pretty cool. But truthfully, it hasn’t done Jett Baranov many favors. I mean, sure, his tech-giant dad, Vladimir Baranov, kinda rules the world. And Jett has everything a 12-year-old could possibly dream of. But all of those goodies have really only made Jett something of a self-focused jerk. In fact, Jett has become famous for being Silicon Valley’s “No. 1 Spoiled Brat!”

Jett just loves pulling stunts that nobody else would dream of. But after a certain bit of mischief—involving a drone and an international airport—results in the U.S. Air Force being called in, Jett’s father finally intervenes. Soon, Jett finds himself assigned a “handler” and is shipped off for the summer to an isolated family camp in the heart of the Arkansas wilderness.

That would be horrible enough, as far as Jett is concerned, but the Oasis of Mind and Body Wellness is also a vegetarian family camp: a place of exercise, meditation and controlled diet. Oh, and it’s totally unplugged: no screens whatsoever. And that last bit turns the torment of Jett’s surroundings into a nightmare.

On top of all that, the other kids at the camp interest Jett about as much as being poked in the eye with a stick. Grace, for instance, is one of those kids who actually loves everything about Oasis and can’t stop letting everybody know as much. Tyrell is a constantly scratching dude who seems to be allergic to, well, everything! And the secretive and bespectacled Brooklynne strikes Jett as having all the personality of a CIA agent.

However, as Jett plots to pilfer his phone and to create the kind of havoc that this secluded place and its “pathfinder” leadership has never dreamed of, he is totally unaware that something unexpected is about to happen. It might seem like a little thing to a casual observer. But it’s something that will cause Jett to gather the above-mentioned kids together as a like-minded team. It’s a thing that will grow and slowly unveil some misdeeds that have gone unnoticed for years. And it’s something that will challenge Jett to take actions he’s never taken before.

By the time it’s all said and done, Jett will have to prove that he’s more than just a troublemaker. In fact, Jett Baranov might actually be a good friend.

In a tense situation, Jett thinks back to his father’s suggestion that “sometimes all you can do is pray for a miracle.” Though Jett doesn’t believe he’s “smart enough or lucky enough” for that to work.

Emptying the mind through meditation is a central part of the daily routine at the Oasis camp. (We find out, however, that there are some hypnotic manipulations in play as well.)

Most of the adults at the camp, save one, are sincere about their reasons for being at the health-focused Oasis outpost. And the parents believe the unplugged activities and diets will help their kids, too. That said, many folks seem unbelievably clueless about some parts of the rather nefarious things afoot at the camp. And that includes adults in a nearby town that Jett and his friends sneak out to visit. None of them seem to wonder about anything that would ordinarily trigger the curiosity of an average grown-up.

Without giving too much away, I can say that one individual is manipulating people and involved in several very illegal activities. But thanks to youthful actions, that person receives a clear comeuppance and things are set aright by story’s end.

It should also be noted that two young friends have a positive change of heart about the right and wrong things in life. And Jett, in particular, walks away with the belief that “doing the right thing can be more important than doing what makes you happy—even when it hurts.”

There’s nothing nasty or foul in the story mix. The closest thing to a winking crudity involves the camp mantra of “Be whole.” Jett twists that into “be a hole.” He also uses the phrase, “fertilizer hits the fan.”

The kids break the rules at times, including picking locks, breaking into someone’s room, “borrowing” a boat repeatedly, smuggling food into camp, etc.

Jett and the others adopt a small seemingly defenseless lizard they find. (That breaks the camp rules on no pets, but they believe the little creature will die otherwise.) This little lizard has sharp teeth that draw blood through a bite or two. As the creature grows, it becomes more aggressive, eating a field mouse whole at one point.

A large 13-year-old boy at camp threatens others. Someone gets hit with a thrown bulrush, and two kids tumble from a crashed boat into a bramble bush. Jett gets a split lip after a tumble. And he’s manhandled a bit by large guards (though not hit or hurt). Jett also encounters a number of dangerous creatures being held in a pen.

What do you think this book says about our personal choices and their impact on others? What about friendship? What pulled these very different friends together in this book? Do you think something like that can happen in your real world? How do you find common interests with others?

Jett’s relationship with his parents seems difficult here. Why do you think that’s the case? Can busy parents still have good relationships with their kids and be a part of happy families?

We often think that having more “stuff” will make us happier. What do you think about that? How do you think everyone can find the right balance between the things we have and the day-to-day lives we live?

Author Gordon Korman is a prolific and well-respected children’s book writer. This, his latest, has some nice light lessons for young readers by the time they reach the tale’s active ending. Ironically, though, the story has surprisingly little to say about the benefits of kids being “unplugged” from their screens.