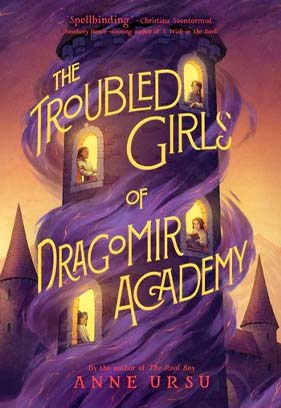 Marya never does anything right, and in the kingdom of Illyria, every girl must know her place. When a letter arrives announcing that Marya must attend Dragomir Academy—a school for troubled girls—she despairs over disgracing her family once again. But once at the academy, Marya discovers that she might just be the hero Illyria needs.

Illyria is a beautiful kingdom with a dark curse: the Dread. The magical, deadly fog kills people without warning, sometimes wiping out entire villages. Only the kingdom’s sorcerers stand between the Dread and Illyria’s people, making them the most revered men in the kingdom.

Marya’s parents have always hoped that her older brother, Luka, would become a sorcerer. They lavish their love, resources and expectations on their son while Marya does chores and spends her days watching the neighbors’ children.

One day, sorcerers come to test Luka’s magical potential. The visit begins with promise but ends in disaster when Marya forgets to close the goat’s pen, causing havoc. Marya is promptly summoned to attend Dragomir Academy, a school for troubled girls.

Marya is sad to leave behind everything she’s ever known, and the cold reception she receives doesn’t help her spirits. Marya’s classmates—Ana-Marie, Elana, Katya, Elisabet and Daria—don’t want to be at the school either, and they’re as wary of her as she is of them.

The school is housed in an old mansion that a Count Dragomir donated to the kingdom for its use as the academy. Madame Rosetti, the stern deputy headmistress, explains if the girls do well and graduate, they can expect to receive coveted positions on sorcerers’ estates. But as the girls do their coursework, Marya begins to suspect that the adults aren’t telling the students the whole truth.

Outside the school, the Dread is getting worse and becoming more unpredictable. Inside, Marya and Elana investigate the history of the school, including the mysterious disappearance of Nadia Dragomir. When Elana gets sick with what the adults insist is mountain madness, a sickness that can only be cured by a sorcerer, she disappears. As Marya desperately tries to find her missing friend, she’s caught in the headmaster’s office—and everything goes black.

Marya wakes up at a sanatorium a few miles from school with Elana. Before they can figure out what’s going on, the girls see a fog hanging over the mountains heading straight for Dragomir Academy—the Dread.

They race toward the school, hoping they can warn everyone and unravel the school’s mysteries before it’s too late.

Sorcery, sorcerers, witches and magic all feature prominently in the book. Giants are also mentioned. The society and many characters place a low value on women, believing them to be morally weaker and easier to corrupt.

Marya’s parents are disappointed and somewhat negligent of her while doting on Luka. Some neighboring parents, the Bandus, are the only parents portrayed in a positive light. Madame Bandu is kind to Marya and teaches her to read.

Madame Rosetti and Madame Szabo are stern but care about the students. Simona, an older girl in charge of helping the first-year students, is nice and fair. Headmaster Iagar seems nice but is actually selfish and manipulative.

The government of Illyria is corrupt and places little value on women.

Do you believe everything other people say about you? Why or why not?

How do you know if what someone says about you is true?

What do you think defines you? Why? Is that something you should let define you?

The Troubled Girls of Dragomir Academy is an exciting book with a mystery for its readers to unravel. However, most characters in authority are portrayed negatively, with everyone from parents to the kingdom’s government being corrupt. The book’s overall message presents an opportunity to talk about identity and what defines a person.