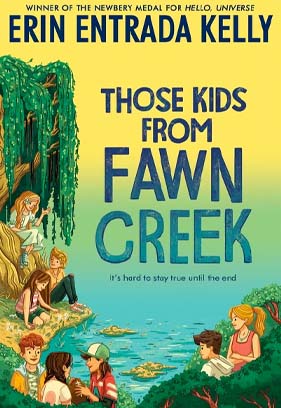 Life in Fawn Creek, Louisiana, can be summed up in one word: predictable. Then one day, a new student walks through the door. Orchid Mason brings her imagination to the seventh-grade class, challenging them with kindness and shaking them out of the ruts they’ve fallen into.

Nothing ever changes in Fawn Creek. Greyson knows exactly what to expect out of his quiet best friend, Dorothy. He’s known every kid in his seventh-grade class since they started school together.

Max, Daniel and Colt are the jocks. Daelyn, Baylee and Hallie call themselves the God Squad. Janie and Abby’s family runs half this Louisiana town, and they don’t let anyone forget it. Barn and Slowly’s family runs the other half, but they couldn’t care less.

Renni Dean had been part of this collection since the beginning, too, but now she’s moved to the neighboring town of Saintlodge. And truth be told, Greyson and Dorothy are more than happy to have the mean, rich girl out of their hair.

Just when Fawn Creek seems to be getting even more predictable, though, Orchid Mason arrives.

Orchid befriends Greyson and Dorothy and tells them about her life moving all around the globe, from being born in New York City to most recently living in Paris. When Dorothy admits that she doesn’t like her own name, Orchid encourages her to try a new nickname.

Greyson’s name is the least of his problems. He wishes his mom would teach him about sewing and fabrics because of his interest in fashion. But guys in Fawn Creek are only into football and hunting—as Greyson’s mean older brother constantly reminds him.

The news of Orchid’s arrival soon reaches the ears of Renni via her friends Janie and Abby. And when Renni learns her ex-boyfriend, Colt, might be interested in this new girl, she makes it her mission to learn about the strange, well-traveled newcomer.

Meanwhile, Orchid’s kindness is helping her classmates think about themselves and each other differently.

One day, Orchid and a few of the girls play a game called mirror, mirror. They each share something mean that someone said about them—something they still think about when they look in the mirror. Then everyone else shares compliments about the person. Once they’re done sharing, Janie can’t help but notice all the mean comments had one source—Renni.

Greyson and Dorothy have never been to Orchid’s house, so one Saturday they walk in the direction they see her take from school. Soon they find out that Orchid Mason isn’t who she claims to be. And over in Saintlodge, Renni learns the same thing.

Greyson and Dorothy accept their friend even though she isn’t the world traveler she said she was. But Renni is never one to accept or forgive.

When the Fawn Creek kids all go to Saintlodge for a dance, Renni plans to use Janie and Abby to help her expose and punish Orchid for the liar she is. Who would dare stop her? The kids in Fawn Creek’s seventh-grade class have lived under her rule for years. Why should that change now?

But change is always possible—even in Fawn Creek.

Three girls call themselves the God Squad and attend the Baptist church nearby. Most others in the town attend the Catholic church.

Daelyn prays for forgiveness after thinking about stabbing a mean girl with an eyeliner pencil.

Greyson’s dad belittles him because Greyson doesn’t want to hunt. Later though, they have a conversation and his dad says he loves him even if he doesn’t understand him. Greyson’s mother is more receptive to his interests and eventually teaches him how to sew.

Dorothy’s parents are older, and she often feels like nothing more than an unwanted surprise. After she throws dirt in Renni’s face, they take her phone and ground her.

Mr. Agosto and Mrs. Ursu are good teachers, though we don’t read about them much.

There are two mentions of characters cursing.

Renni calls Orchid white trash and says that Orchid’s mom is a prostitute who does drugs.

Several times the author indicates that characters use a homosexual slur.

After Renni tries to get Janie to cut Orchid’s hair off, a fight breaks out between Renni, her boyfriend and the Fawn Creek kids. Dorothy throws dirt in Renni’s face. Daniel throws a punch, and Colt lands a punch.

Orchid talks about her first kiss with her boyfriend in Paris, and she says goodbye to Greyson and Dorothy by kissing them on each cheek like she’s French.

Greyson kisses Dorothy’s cheek, even though they’re just friends,  and she does the same to him.

Janie had trouble deciding if Renni was a true friend or not. How do you know if your friends are good friends?

How do you react when people are mean to you? Read James 1:19-20 and Matthew 5:38-45. Do you think we should accept those verses on face value? For that matter, do you usually react the way Jesus would want you to? Why or why not? If not, how should you react?

Erin Entrada Kelly manages to create unique characters even with such a large cast. The conflict she paints is one many middle schoolers can relate to, small town or not.