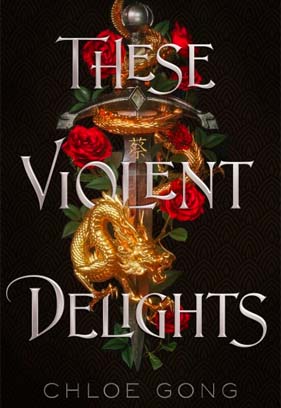 In this re-imagining of Romeo and Juliet in the time of flappers and gangsters during the 1920s, Juliette Cai is back from America to her native Shanghai with a lot to prove. But a mysterious monster has appeared. And the only way to deal with it is to work with Roma Montagov—the only guy Juliette has ever loved and now hates because he betrayed her.

Eighteen-year-old Juliette Cai has returned from America to her native Shanghai. As heir to Shanghai’s Scarlett gang, this is her chance to prove her worth, and maybe display a bit of her ruthlessness, too.

As a girl she was betrayed and sent away years earlier. And it was all because she loved Roma Montagov, the heir to Scarlett’s rival gang, the White Flowers. But proving her worth isn’t about some past fragile feelings or a lust for violence; it is a way to ensure her safety and protect her family.

In the meantime, a mysterious monster has appeared. It comes out of the Huangpu River and spreads infection. The infection, like lice, attacks anyone regardless of gang or political affiliation. Once sick, people go crazy and kill themselves by tearing out their throats with their own hands. The madness spreads without an answer until a shadowy dealer shows up with a cure. However, that innoculation only works for some.

A monster that disappears into the water, a magical vaccine, a mysterious dealer. It seems like the only way to find a solution that can stop all the madness and cover all of Shanghai is to approach the White Flowers gang and work once again with Roma Montagov. He may be the only man Juliette has ever loved, but that’s of little concern now. Thanks to his past betrayal, she feels more loathing for him than anything else.

But as the bodies pile up and fears rage, Juliette and Roma must agree to set their grudges aside. They must work together, even if just in secret. For if they can’t find a way to end this terror, there will be no city left for either gang to rule.

There is no dominant religious belief. There are a couple of passing references to sin and Scripture.

This book delves a lot into racism and colonialism. Juliette shares her experience of being excluded and demoralized for being Chinese during her brief time in America. In addition, the French, British, and Americans act entitled and superior as they assume control over parts of Shanghai. Juliette’s father, the leader of the Scarlett gang, warns her that a white man who feels slighted is the ultimate villain. One of the political factions trying to take over is the Communist Party. There are meetings and flyers with communist themes.

All the leading characters’ fathers are disconnected from, and hard on, their children. (Most of the mothers are dead.) Juliette’s father pushes her to lead the gang, but he never has time to spend time with her or help her. Roma’s father is heavy-handed with both of his children and is verbal about his disappointment in Roma for being involved with Juliette in the past. Finally, we meet someone named Kathleen. Kathleen’s lack of acceptance by her father is negatively depicted because Kathleen—a man—takes on the identity of a woman.

The s-word and the words “a–” and “d–n” are used. And other profanities in French show up.

The gangs sell drugs—usually some derivative of opium. We’re given a description of an opium den filled with slumped bodies. There are several bars and drinking in the story mix. And in one situation, getting answers from an informant requires that Juliette and Roma drink shots of alcohol until they’re drunk.

We read about a lot of violence, too. members physically fight and shoot one another. That results in gory descriptions that mention spurting blood and torn-open arteries and muscles. A man has a cleaver slammed into his head. We hear of throats being slit and an autopsy performed. And we’re introduced to an underground fight club. On top of all that, there are the victims of the madness who die by gorily tearing out their own throats.

In addition to selling drugs and alcohol, the gangs own several brothels and burlesque clubs. Prostitutes and whores are mentioned, but the act by which they make their living is never described. Juliette and Roma kiss a couple of times and tumble into bed after getting drunk, but they don’t have sex. They’re referred to as lovers from their time together before as teenagers.

It is hinted that Roma’s cousin and best friend have a homosexual interest in each other, but that’s never acted upon. Juliette’s cousin, Kathleen, is a trans woman (a man dressed as a woman.)

Juliette finds herself stuck between two worlds. She was born in Shanghai but educated in America—a mix of cultures that has left her feeling uncomfortable in both worlds. What is your background? If God is the creator of humans and their variety, how should all people be treated? How do you celebrate your culture?

What does sacrificial love look like? Juliette decided she had to lie, letting Roma hate her to protect his life. Is that what love does? How does lying affect love? Compare the love of Jesus for His bride to know what real love is.

Because of These Violent Delights’ long run as a New York Times bestseller (and its recently released sequel, Our Violent Ends) Chloe Gong’s creatively vivid take on the Romeo and Juliet tale could spark a lot of interest among young-adult readers. The book talks of making positive change through courage, perseverance, and teamwork. But parents should note that younger readers will encounter some adult situations and violence, and the language can get pretty rough.