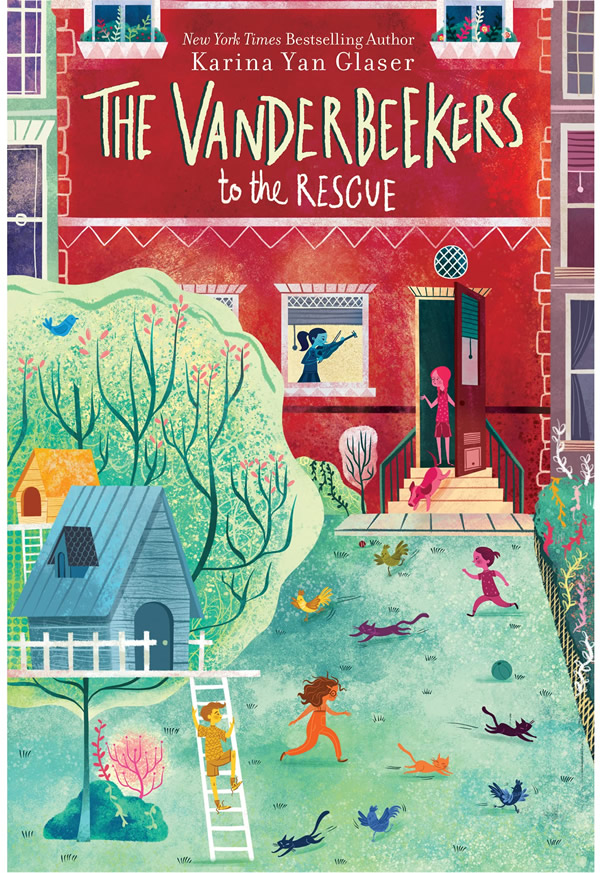 In The Vanderbeekers to the Rescue by Karina Yan Glaser, the five Vanderbeeker kids scramble to repair the house for Mama’s magazine interview and try to keep the health inspector from shutting down her business. It is the third book in “The Vanderbeekers” series.

The Vanderbeekers are a biracial family with five children. Jesse and Isa are 13-year-old twins. Oliver is 10, Hyacinth is 8, and Laney is 6 years old. Papa repairs computers; and Mama, a professional pastry chef, bakes from their brownstone in Harlem. They also have a dog, a cat and a rabbit. The Vanderbeekers’ neighbors, Miss Josie and Mr. Jeet, as well as their landlord, Mr. Beiderman, are friends of the family.

In The Vanderbeekers to the Rescue, Mama learns a prestigious publication called Perch Magazine wants to interview her about her baking business. They’re sending a photographer to the house in a month. Mama looks around at the well-worn brownstone and realizes work needs to be done.

One day while she’s out, an inspector from the Department of Health comes to examine her workspace while she’s not there. He says Mama is violating rules by having pets in the same area where cooking takes place, and he revokes her home processor’s license. Instead of telling Mama what’s happened, the kids call the inspector’s office pretending to be Mama and request a second inspection. They enlist neighbors to watch their pets on the day of the follow-up visit.

Plans go awry when the children find themselves accumulating more animals. For several days in a row, they find boxes on their doorstep containing kittens and other creatures. The nearby animal shelters are overflowing, and the kids learn the animals may be euthanized if they leave them there. They decide to post fliers and seek homes for the animals instead.

Since the living room walls need work, the kids try to surprise Mama by painting after she’s gone to bed. Paint is expensive, so they use some paint that they’ve been given. In the light of day, the soft pink they thought they were using is actually a blinding fuchsia.

The kids get another idea for saving Mama’s business when they see a rundown storefront for sale a few blocks from home. What if they could buy it so Mama could have her own bakery? But the real estate agent refuses to work with them. Then the health inspector returns and informs Mama she can no longer run her business. Mama contacts an old employer about a job and begins to brush up on her accounting skills.

The kids discover their neighbors’ grandnephew left the animals on their porch. He admits he was tired of seeing them abandoned near the congested shelters, and he knew the Vanderbeekers would help them. One sibling reads about a café across town where adoptable cats can roam around for patrons to enjoy. The children meet with the owner and take copious notes about how to run such an establishment.

The owner of the building with the rundown storefront observes the children as they make multiple trips to sweep the stoop. She fires the real estate agent and lets the kids have the space. For Mama’s 40th birthday, the children surprise her with the shop. Friends and family members promise to help fix it up. The kids find homes for the other animals and allow the kittens to be the café’s first adoptable pets. Sometime later, Perch Magazine features Mama’s new cat café

We hear a few mentions of people blessing the food before dinner.

The good-natured Vanderbeeker parents roll with the chaos in their home and do whatever it takes to support their family. Upstairs neighbors, Miss Josie and Mr. Jeet; and landlord, Mr. Beiderman, nurture and help the children like adopted grandparents.

No profanity, but a character uses the word “heck” once.

There’s no sexual content here. But parents might want to know that 10-year-old Oliver has a sleepover in his treehouse with two neighborhood friends, one of whom is a girl. Nothing untoward occurs.

Death: The kids’ beloved, elderly neighbor, Mr. Jeet, has had a stroke. His health is declining. Although he doesn’t die in this book, Laney grapples with the idea that things are changing, and that she will eventually lose him. The book includes frank discussions about how pets which are sick or old, as well as unadopted animals at shelters, sometimes have to be euthanized. The kids take in several animals, including a litter of kittens, to save them from this fate.