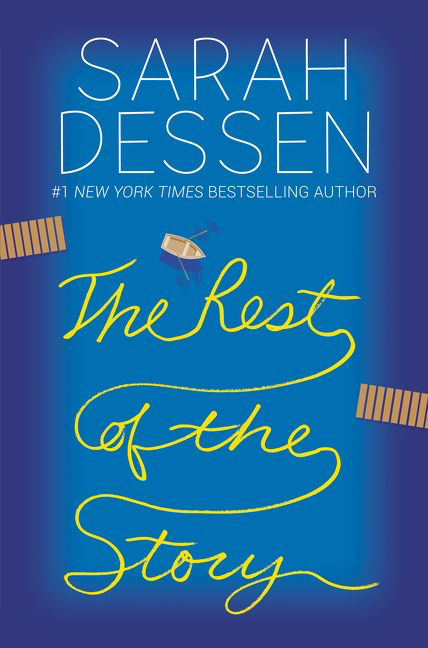 *The Rest of the Story* by Sarah Dessen tells about Emma’s visit with her estranged grandmother, where she learns about the mother she barely knew.

Emma’s summer is all planned. After her widowed father’s wedding, he and his new wife are going on a three-week sailing honeymoon near Greece. Emma will be spending the time with one of her best friends, Bridget. Unfortunately, Bridget’s grandfather has a stroke the morning the newlyweds are supposed to leave and Emma’s other friend, Ryan, has left for a summer camp.

Normally Emma could stay with her Nana, but Nana’s apartment is being renovated, and she is going on vacation. Nana suggests they call Mimi Calvander, Emma’s other grandmother, whom she has not seen in 12 years. Desperate for her father to enjoy his honeymoon, Emma insists she be allowed to stay with Mimi.

Emma’s mother, Waverly Calvander, grew up with Mimi on North Lake. Waverly died of a drug overdose five years ago, but as her parents had been divorced before then, Emma has few memories of her. Mimi has been running a small motel on North Lake for years and is thrilled to have Emma come stay with her.

Emma is given her mother’s old room in the main house. Tired, Emma falls asleep, waking up disoriented in the afternoon and immediately being thrown into the chaos of Mimi’s family.

Celeste, Emma’s aunt, lives in the house with her three children: Trinity, Jack and Bailey. She is also taking care of Gordon, her cousin Amber’s young daughter. Mimi insists Jack, who at 20 is three years older than Emma, take her out to the local hangout, the raft, to meet the other kids from North Lake. Although Jack’s girlfriend initially takes a disliking to Emma, their friend Roo is welcoming.

Emma is surprised when Celeste tells her she and Roo had been inseparable when she [Emma] had visited over 10 years ago. Emma is also told Roo’s father died in a boating accident before either of them was born.

The following morning, Emma insists on helping Trinity clean the motel’s rooms, as Mimi has a bad knee she is supposed to rest. The cousins discover they have misread each other. Trinity thought Emma was a spoiled rich girl. Although Emma’s father is wealthy, she is more than willing to work hard to help her family. Emma thought Trinity had a chip on her shoulder because she is single and very pregnant. But Trinity is engaged and waiting anxiously for her fiancé to return from deployment overseas. Being pregnant does, however, make her very cranky.

Although none of the other local kids like to hang out at Lake North, Bailey convinces Emma to take the boat with her to the other side of the lake one night. Bailey introduces her to Colin and Blake, two boys she has been hanging out with. The college boys live and work at the resort for the summer. They take the girls to their apartment where a party is starting.

Emma declines any alcohol as Blake and the others drink. Jack and Roo arrive, and Emma tries to get them to stay at the party. But Jack is furious. He demands the keys to the boat so Bailey does not drive it home after drinking. After arguing, she gives him the keys. Embarrassed and angry, Bailey starts to walk home. Emma joins her.

On the 3-mile walk home, Bailey tells Emma how Roo’s father, Chris, and Emma’s mother had been best friends. The summer before Waverly married, she began feeling nervous about moving away from North Lake. On the night of her 21st birthday, after arguing with Celeste, Waverly and Chris went out to a bar.

When they were cut off there, they picked up a six-pack of beer and took Chris’ boat out to the raft. As the night wore on, Waverly slipped away and swam back to shore without telling Chris. When he realized she was missing, he jumped into the boat to search for her. Well past the legal limit, he must have become disorientated and hit a mooring in the lake. He was thrown from the boat. The impact from the water broke his neck. Waverly never talked about the accident, but it was told as a warning every summer to all the kids from North Lake.

As Bailey pursues a relationship with Colin, Emma continues to see Blake, even though she finds herself attracted to Roo. She is surprised when Blake asks her to attend the Club prom with him. She agrees and is relieved when Colin asks Bailey to attend.

After a whirlwind week of finding dresses for the big event, only Blake arrives to pick up Emma. Colin has stood Bailey up to go with a different girl. Emma refuses to go to the dance without her cousin. Instead, Jack and Roo take the girls to Roo’s house where they and their friends set up an impromptu dance of their own. Emma finds herself drawn even closer to Roo, but they are interrupted before they can share their first kiss.

With only a few days left until her father returns from his honeymoon, Emma begs for more time with her cousins. Her father strikes a deal: Emma will stay with her immediate family in a luxury condo in Lake North for two more weeks but can visit her cousins.

During that time, her father keeps her too busy to make the 3-mile trek to the other side of the lake. A day sailing with him and her stepmother nearly turns into a disaster when their boat takes on water. Bailey comes to their rescue and tows the sailboat.

Bailey tries to convince Emma’s father to let her come to a friend’s birthday party that night, but he refuses. Bailey helps Emma plan to get to the party without her father knowing. After having dinner with her parents and family friends, Emma pretends to be going to a movie on the beach. Then she sneaks out to the party.

Emma is upset when she sees Roo with another girl. She indulges in several beers, something she has never done before because of her mother’s struggles with alcohol and drugs. She quickly becomes drunk and loses sense of time. Bailey and Roo try to sober her up before driving her back to Lake North. Emma’s father is furious and grounds Emma. Bailey, Trinity and Roo call her cellphone to keep her company in her confinement. Roo tells her everything he knows about her mother’s past.

Eventually, Emma’s father lets her out to go for a walk, and he explains his concerns that if she is not vigilant to abstain from alcohol and drugs, she may end up like her mother. Emma insists she is a different person and that Mimi and her cousins are not a bad influence on her. He asks if she would like to join him and her stepmother the following night on the beach to celebrate the Fourth of July, and she readily agrees.

Emma’s grandmother arranges to have Mimi and the rest of the family go to the resort for a special dinner to thank them for taking care of Emma. That afternoon, however, a storm comes in from the Atlantic. While the staff at the resort insist there is nothing to worry about, Mimi and her family prepare for the worst.

As evening approaches, the skies grow more ominous. Bailey and Roo call to warn Emma to take shelter in the resort’s basement, away from the windows. Trinity calls begging for a ride to the hospital. Although she is not experiencing contractions, she is paranoid her baby will come during the storm.

Leaving her stepmother and grandmother at the resort, Emma and her father set off to help Trinity. A fallen tree blocks their way, but Roo fortuitously pulls up on the other side of the street. He drives them to Mimi’s house to try and calm Trinity.

Emma’s father searches for her young cousin, Gordon, who ran away after arguing with Trinity. As the storm pounds closer, Emma is terrified her father will be hurt, but he finds Gordon in time to ride out the rest of the storm inside with the others.

Mimi’s motel receives little damage as they had boarded up windows and taken the proper precautions. The resorts on Lake North, however, suffer major damage, and guests are asked to leave. Emma and her family move into Mimi’s motel for a few days. Emma and Roo settle into a romantic relationship, planning to keep seeing each other even after she leaves the lake to return home.

Emma likes to read the obituaries. She comments that religious people will often quote Scripture or tell where they hope to go in the afterlife and whom they want to see there. Her mother met her best friend, Chris, at a church’s summer day camp. Emma is told her mother hated the camp because there were too many rules.

Several mentions are made about things being “bad luck.” At her father’s wedding, Emma comments that another friend is trying to jinx her future by mentioning the fact that 50% of marriages end in divorce. Another friend says it is bad luck to refrain from drinking after making a toast. Emma reads her horoscope in the newspaper.

Emma’s father is decent, loving and very concerned about her. They have a very close relationship. When Emma was a young girl, her mother died of a drug overdose. Mimi is a kind and loving grandmother who wants the best for Emma. She gives Emma a lot of freedom to make her own decisions.

God’s name is used in vain alone and with d–nit, oh my, sake and thank. Lord and Jesus are used as exclamations. The f-word is used as a verb. A– is used with the words smart and hole. S— is used alone and with oh and bull. D–n and b–chy are also used. Other objectionable words are douchebag, sucks and the phrase hot as balls.

Emma’s mother died of a heroin overdose with a man she met in a bar. Her friend Chris died in a boating accident. Neither incident is described in detail.

Emma shares her first kiss with Blake, a boy she only just met. The kiss is not passionate. Later, she and Roo share several intimate kisses. Emma’s friend admits in a text to being gay and forming a relationship with a girl while away at drama camp.

Alcohol: Emma’s mother was an alcoholic. It is apparent that the summer highlight for the teens at the lake is to party together most evenings. Emma attends several parties where others drink, but she does not. Most of the time the kids drink beer. One night, angry that Roo appears to be dating another girl, Emma drinks several beers and becomes intoxicated to the point of throwing up and passing out for several minutes. Adults drink wine at dinner.

Narcotics: Emma’s mother was an addict. She went to rehab several times but always went back to the drugs. She died of a heroin overdose in a motel room with a man she picked up in a bar.

Lying: Emma lies to her father so she can sneak away from the resort and go to a party with her friends.