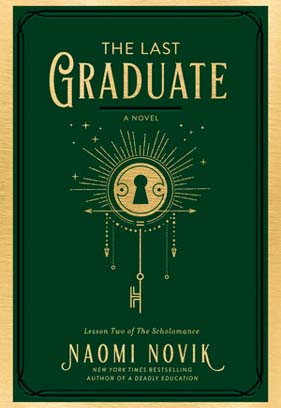 Prophesy says that Galadriel “El” Higgins is destined to destroy the world. And most other teens at The Scholomance—a magic school for young wizards—hate her and think she’s an evil sorceress in the making. In fact, the school itself wants her dead.

Fun school memories might be a little tough this year.

She could always call up a lava-spewing volcano in the lunchroom that would parboil all the nasty students glaring at her.

She could do that.

I mean, that’s what they expect from her anyway, right? And boy, would that wipe the sneers off their faces!

But Galadriel “El” Higgins won’t do that. Really, she won’t.

El may have been prophesized to someday be a world-destroying terror. Most students probably see her as a noxiously evil sorceress in the making. And now that she’s in her senior year, she’s really shown a skill set for mass destruction. (I mean, if someone’s written a spell that’ll destroy cities, slaughter crowds or torture people, all she has to do it glance at it and it’s in the old noggin.)

But that’s not El. Not really.

Besides, big destructive spells take large amounts of mana. That’s a limited resource that requires hard work to generate. And El isn’t going to waste all of hers just to melt the faces off some kids who tick her off at lunch. Not if she wants to graduate from The Scholomance.

The Scholomance is a magic school that has no teachers or administration. It teaches the kids itself–magically delivering everything from meals to books and lesson plans. That is, of course, when it’s not directing lethal “maleficaria,” or “mals” for short, in the youngsters’ direction.

Mals are part of the learning curve, you might say. They pop out of every crevasse and heating vent when you least expect. And if you don’t have the proper store of mana or the right spell at the ready, you are quite literally monster meat.

So, stirring up volcanoes in the lunchroom just doesn’t make sense, no matter how you slice it. And that’s especially true in light of the fact that nearly three-quarters of every graduating class is dead and devoured in the school’s graduation ceremony each year.

Yeah, learning ain’t easy. Of course, living … might be even harder.

Spiritual powers are intricately woven through the fabric of this story. But faith is only mentioned once in the form of a “religious” individual who prays in Hebrew.

The only other reference to a deity or creator shows up in El’s run-on disdain for the whole idea:

“You don’t want mysterious unexplained advice from someone you know has your best interests at heart and whose judgement is unerringly right and just and true. Either they’ll tell you to do what you want to do anyway, in which case you didn’t need their advice, or they’ll tell you to do the opposite, in which case you’ll have to choose between sullenly following their advice, like a little kid who has been forced to brush her teeth and go to bed at a reasonable hour, or ignoring it and grimly carrying on, all the while knowing that your course of action is guaranteed to lead you straight to pain and dismay.”

On the other, far darker, side of the coin, however, is all the black magic in the mix. Spells are cast in all languages. (Some are actually spelled out.) There are some healing and defensive spells cast, but most magic here tends to be dark and destructive. And the mals are all destructive, spirit-like creatures that regularly crawl out of some shadowed place with the hopes of ripping flesh, breaking bones and generally eating the defenseless whole.

The Scholomance itself is revealed to be a construct created entirely of magic. When dark magicians originally cast the school into existence, they unintentionally added a number of imperfections. And those imperfections have turned the school’s original task of protecting its charges into something far more malicious and deadly.

There aren’t any that fall into this role other than El’s memories of her mum.

Mum is actually a healer who warned El to stay away from things that would drive her in the direction of darkness and evil. And El—who generally tends to be sarcastic, grumbling and dour, and who really dislikes most everyone around her—slowly pieces her mother’s advice together into a choice for good. In spite of her deadly surroundings and generally nihilistic viewpoint, El decides to use her abilities to save others.

El’s spells are still very deadly and destructive, but she uses them to help masses of other, weaker students. And she slowly gains and sways friends at school who help her in those goals.

While The Last Graduate isn’t filled with profanity, the foul language we read can be pretty extreme, including f- and s-words. Some colloquial phrases can be quite crude, too.

Brutal violence, on the other hand, is a mainstay here. Buildings, people and creatures are injured or destroyed en masse. There are many instances of skin being stripped away and bones exposed. We hear about bodies drained of blood and organs popped. And though the mals are regularly gutted or torched or liquified, there are many bloody human injuries as well. And it’s all served up in a mishmash of horror and dark dread.

Potions are consumed and distributed that do everything from poisoning to healing others.

Of the few who actually like (or merely endure) El, Orion is a guy who is head-over-heels for her. El tends to treat him like an irritating rash—though other teens adore him. Eventually, though, her feelings begin to change. They kiss and embrace, Then things get much more heated to the point of the pair stripping off their clothes and having sex. (The act isn’t crudely described, but it’s pantingly clear enough.)

El thinks her way through her menstrual cycle calendar and the impact that further intimacy might have. The only thing that truly holds her back from an intimate romp appears to be the possible physical consequences.

Pairs of males and a pair of females kiss intimately. And both couples are warmly embraced by friends.

Things to discuss between parents and kids regarding issues raised in the book.

Fans of the Harry Potter young-magicians-at-Hogwarts books have long been looking for a replacement series that they could dive into. And author Naomi Novik’s Scholomance series has been dubbed by many to be just that, albeit from a very dark and grim perspective. That alone will draw the attention of young readers.

But those readers and their parents should know that this second book in the series, The Last Graduate, is filled with very dark and often brutally gruesome magic castings and monster attacks. While there are positive parts in this tale encouraging teen friendship and personal sacrifice, the monsters are deadly, the humor is cutting and sarcastic, the language is foul and the sensual moments can get pretty steamy.

This densely overwrought novel will appeal to some, but it’s far from Potteresque.