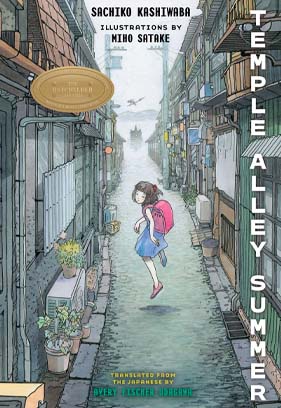 A strange girl dressed in white steps out of Kazu’s family altar room in the middle of the night. Was she a ghost? A zombie? Young Kazuhiro Sada has a slightly scary mystery to solve.

It all started with ghost stories on TV. Kazuhiro Sada knew he shouldn’t be watching those spooky shows, since he freely admits that he’s a bit of a scaredy-cat. But Kazu watched them anyway. Later that night, he wished he hadn’t.  For when he happened to look out his bedroom window, he caught sight of a pale young girl, all dressed in white, stepping out of his house.

He instantly thought she must be a robber. But she wasn’t carrying any stolen items. And she was stepping out of the family altar room in their sprawling old Japanese home. A robber wouldn’t be taking things from there. She appeared to be right about Kazu’s age, too, so there shouldn’t be anything of interest for her in the altar room. There sure wasn’t anything in there that he cared a whit about.

So, could she be a ghost? Maybe a zombie? Or maybe he dreamed it all. Was this all some kind of half-awake nightmare connected to the shows he knew he shouldn’t have watched? Kazu thunked himself in the head and tried to get back to sleep.

The next day, Kazu spots the ghost girl again. Only this time she’s dressed in normal clothes and chatting with school friends. Everyone else in their 5th grade class seems to know her, and they talk like she’s been living in Kazu’s neighborhood for years. In fact, when Kazu quietly asks about the girl, his best friend Yusuke thinks he’s slipped a gear or something. Yusuke insists they both have known Akari Shinobu (for that’s the girl’s name) since kindergarten.

Am I going crazy? Kazu wonders. How could everybody be friends with a girl he had never seen before she walked out of his own house the night before? There’s something very odd going on. And he can’t just walk up to this Akari and ask her about either. I mean, what if she is a zombie and tries to eat his brain?

Later, however, in history class, his group is given an ancient Japanese map of the area to look at. And it lists the area where Kazu lives: Kimyo Temple Alley. Kazu had never heard of any temples near his house. And why would his street have been called an “alley”?

Ghost girl Akira has certainly presented young Kazu Sada with a mystery. And his teacher may have just given him his first clue to follow.

There’s definitely a number of spiritual things that Kazu explores as he tries to solve the ghostly mystery. One story that his uncle tells him reminds Kazu of Japanese Christians who “worshipped in secret in the seventeenth, eighteenth and nineteenth centuries.”

[Spoiler Warning] Several other spiritual elements land in the story mix. For one thing, Akari is revealed to be something of a resurrected spirit. She was a young girl who passed away 40 years ago and was brought back when her mother prayed to a Buddhist statuette. And that statuette is directly tied to Kazu’s family history.

Kazu doesn’t ascribe to any particular form of faith, but during his investigation he does think about the religious struggle that took place in Japan between Buddhism and the Shinto religion.

Later, Kazu and Akari become friends and he tries to help her realize some of the experiences she longs for. One of those is to find and read the end of an enchanting fantasy story she had once started to read. This tale focuses on a young girl trying to foil the magical plans (part of which involves the magical resurrection of a dead son) of a broom-riding witch.

Akari’s situation is quite magical as well. The local legend states that anyone resurrected by the statuette would not go back to their former life, but be given a new one. That’s why all the kids are supernaturally convinced they know her. And only Kazu can see that Akari’s “mom” is also a magical construct—invisible to him while everyone else can see her.

Kazu’s parents are kind and watchful, but during his investigation he tends to slip by their oversight to go places and ask questions they wouldn’t approve of.

The one adult Kazu deals with the most is an elderly woman named Ms. Minakami, who knows much more about Akari’s mystery than she first lets on. She eventually states various reasons why someone should never be brought back from the dead. None of those reasons are faith-focused, but she does believe the process could lend itself to corruption.

On the other hand, as Kazu and Akira become friends, Kazu makes note of all the things of life that bring Akari joy. They’re simple things, such as reading a good story, going to the beach or just having a good friend—things Kazu tends to take for granted. Through that give-and-take of friendship, Temple Alley Summer makes it plain that in our real life we should treasure life’s good and pure things and focus on living our short lives as grateful, caring individuals.

Kazu reads a fantasy tale that Akira once read. It tells of a girl who is sold into slavery by her father. That girl goes through painful situations, but because of her inner choices those experiences make her a stronger person who strives to better the lives of those around her.

We do encounter some perilous moments in the fantasy story within this story. The young protagonist is forced to nearly drown while being taught to swim. She’s manhandled by a witch and attacked by a large otter-like creature that she must fight off and kill with a metal hairpin. People are slain by swords in this tale, as well. It’s implied that people imbibe strong drink.

In the above-mentioned fantasy tale, the protagonist is stripped and thrown into a lake. Two nearly frozen sisters strip off their sodden clothes and wrap themselves, naked, in a blanket to share their body heat.

What do you think about the spiritual elements of this story? Do you think there are such things as ghosts in our world? What does the Bible say about that? Look at Hebrews 9:27, Ecclesiastes 12:7, Leviticus 19:31 and 1 Timothy 2:1-15 for some insights.

Besides the ghostly elements of this tale, what does this story tell us about friendship? Why do you think Akari loved so many simple things of life? Did that help you think differently about enjoying simple things like reading a good story or talking with a good friend? How can we remind ourselves to love the good life God has given us and grow from the more difficult parts?

Have there been difficult things in your life that have made you a better person? How can you help others see the truth of that? James 1:12 is another verse you might want to look at. What did you learn about Japanese culture from this story?

Written by award-winning Japanese author Sachiko Kashiwaba, Temple Alley Summer is a well-written and compelling book that presents two interconnected ghost stories. Ultimately the tale gives young readers an involving insight into Japanese culture while challenging them to think about friendship and the value and joy to be found in our small overlooked moments of life.

That said, this book’s magical realism and non-biblical approach to death and resurrection will give many parents of young readers pause. And at the very least, those elements could use some parental guidance.