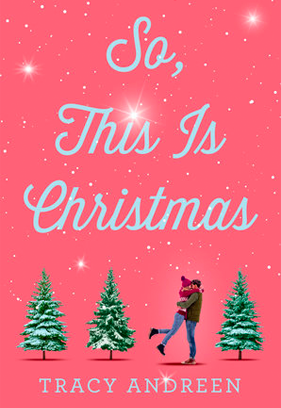 When Finley Brown decides to fly back from boarding school to her hometown of Christmas, Oklahoma, she’s met with a surprise. Her snooty English schoolmate, Arthur, has booked a flight there, too. He and his aunt want to see the incredible American Christmas in Christmas that Finley bragged about at school. Problem is, Finley might have exaggerated just a teeny, tiny bit.

Sixteen-year-old Finley Brown is certainly as bright as an LED bulb on high, but her first semester at Barrington—an elite Connecticut boarding school—hasn’t gone so well.

Maybe it’s because of her small-town Oklahoma sensibilities. Maybe it’s the fact that everyone at Barrington is incredibly smart and expected to perform at a super high level. Or maybe it’s having to rub elbows with other teens like Arthur Chakrabarti Watercress, a stiff, snooty guy from a wealthy British Indian family who always seems on the verge of mocking everything Finley does. Whatever it is, her grades are only so-so, she has no real friends, and she feels like a total failure.

So Finley decides to just fly home to Christmas, Oklahoma, for the holidays. At least it’s comfortably familiar back in that broken-down, quirky, holiday-themed burg. She’ll work a bit at her grandmother’s small inn and then just disappear into her room as Christmas passes in Christmas.

But when Finley arrives home, things aren’t so familiar as she thought. For one thing, her ex-boyfriend Brody and her BFF Mia are now a couple! Not only that, but her former rival Ayisha—the prettiest girl in town—now works at her grandmother’s inn. And her mom and dad might be on the way to the big D—as in divorce.

That, however, isn’t the worst of it. Right after Finley arrives home, Arthur Chakrabarti Watercress and his very British Aunt Esha show up too. It turns out that Arthur and his aunt always jet off to some exotic place for Christmas. And after seeing Finley’s social media posts and pictures about her home town (which might have been just a teeny, tiny bit fabricated) they have come to Christmas for the most incredible Christmas ever!

Of course, when Arthur gets an eyeful of what Christmas, Oklahoma, really looks like—all frozen scrub grass and empty shops in need of a fresh coat of paint—he’s somewhat disappointed. No, he’s furiously disappointed! And he pulls Finley aside to demand that she deliver the Christmas that she promised. Otherwise, things back at school will get a whole lot worse for her.

This could well end up being the biggest disaster of a Christmas in Finley’s short life. Or, like, in the history of man.

Of course … it also might be the Christmas that Finley Brown falls in love.

Arthur mentions that his grandparents were among the few Christians in Kolkata, India, and they conveyed their faith and love for Christmas to their family after moving to the U.K. Later, Finley notes that camels being raised in Christmas are connected to the “Jesus part of Christmas.”

But that’s the closest this book gets to talking about the real reason for Christmas.

Other Christian references include mentions of the various Christian denominations claiming that “Our Jesus is better than your Jesus.” And someone mentions that a man “might as well be a Catholic since he cusses and prays for forgiveness in the same breath.”

The rest of the Christmas references are all secular in nature and nod at everything from the joy of reindeer and light parades to people’s love of various Christmas decorations and paraphernalia.

The adults in the story mix all seem to have their own issues to deal with. They’re nice people, but their relational issues tend to pull them away from some positive interactions with the teens in the story.

The most prominent problem is between Finley’s parents, who are currently separated and appear to be headed for divorce. But they stay faithful to each other and eventually talk out and patch up their differences. Both of her parents openly and warmly tell her of their love for her.

One divorced man, who appears very interested in Finley’s grandmother, is found to be something of a “player” who’s pursuing several women.

There’s actually a surprising amount of profanity here considering that this book is primarily aimed at teen readers. Dialogue contains f- and s-words along with uses of “d–n,” “a–hole” and “b–ch.” There are some crude mentions of sex acts. And God and Jesus’ names are both misused.

When Finley heads to a local Christmas party, teens are guzzling beer and booze and getting quite drunk. She talks of the party smelling of “spilled beer, booze, pot and cigarettes.” Finley abstains from all that. Several adults talk of adding alcohol to hot chocolate. They drink wine together and one man breaks a tooth on a beer bottle. And one person offers up marijuana edibles to someone.

Finley tells of getting into a fight with a bully and being thrown out of his school for accidentally giving a girl a black eye. Several people bounce around in a runaway reindeer sled ride.

Finley and Arthur’s relationship changes and grows through a number of comic and sweet spits and spurts. They go from holding hands and wrestling with internalized feelings to sharing a kiss.

But there are mentions of the fact that a number of people connected to Finley—including her teen roommate at school and both her grandmother and mother—became pregnant out of wedlock at a young age. Because of that, Finley mentions that she always pulled away from intimacy with her first boyfriend, Brody. It’s implied, however, that Brody and Mia (and most teens Finley’s age) are not so chaste. In fact, Finley sees Brody and Mia making out and caressing each other intimately.

There’s also a pair of older women in the story who form a secret lesbian relationship. They flirt with each other and are spotted coming out a darkened area of a park with smudged lipstick and “straightening their clothes.” The fact that some women cover up their sexuality or gender is discussed here at length. And Finley frowns at the idea that past generations had to hide those sorts of things away.

As you may have already guessed, So, This Is Christmas is designed to be something of a holiday romantic comedy written for teens. And there is indeed a number of nutty hijinks, some smile-worthy relationship building and even sweet parental connections in the story mix.

Unfortunately, author Tracy Andreen also creates her tale expecting that small-town teens use some very crude and nasty language. And though Finley and Arthur proceed slowly with their blossoming relationship, on the story’s focus on other sexual and gender issues detract from the book’s sweet appeal.