The Righteous (Book Three of The Beautiful Quartet) 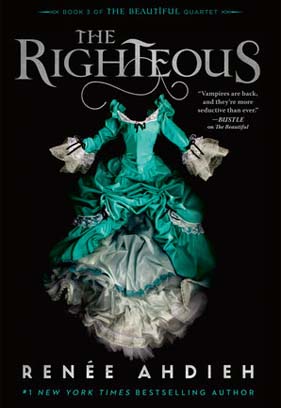 In this third book in The Beautiful Quartet series, vampire Odette Valmont is dying, and the only healer who might be able to save her is in the Sylvan Vale—the world of the fey. Arjun Desai, as a half-fey, must travel there in search of the healer. However, his plans take a turn when Pippa Montrose, a mortal woman whom Arjun is rather fond of, follows him there.

It’s mere moments after the events of The Damned (the second book in The Beautiful Quartet series), and vampire Odette Valmont is alive—but just barely. The fey healer Ifan saved her from dying, but she’s been suspended in a coma-like state, and she will remain like that indefinitely.

“As long as she is undisturbed, she could remain as she is for decades to come, which is not much different from death, I suppose,” Ifan had said.

But there is a way to heal her: Better healers lurk in the Sylvan Vale—the realm of the fey. The only issue is that vampires have long since been banished from the realm, and everyone who cares for Odette just so happens to be one.

Except Arjun Desai, the half-fey.

Of course, Arjun doesn’t really want to go back to the Sylvan Vale, the place where he grew up many years ago. The fey are ruthless creatures, selfish in every way and unafraid to torture and kill anything that isn’t fey. As a half-fey, Arjun is essentially a second-class citizen skating on melting ice. He left the realm a long time ago to leave behind the fear of being murdered in his sleep.

But Arjun would do anything to save Odette, so he steps through a portal mirror and into the world of the fey. Only, he doesn’t realize that he’s been followed by none other than Pippa Montrose, a mortal girl who’s keen on discovering what happened to her best friend, Celine Rousseau, who vanished to the fey world.

And that’s a huge problem. Remember, the fey take pleasure in the torture and killing of all things not fey—especially mortal humans. If Arjun is barely granted the mere tolerance of the fey, Pippa’s got no chance, and he knows he can’t leave Pippa to these savage beasts.

But how much will it cost him to keep her safe?

According to Arjun, a woman named Mrs. Buncombe, is a hypocritical Christian. Mrs. Buncombe distrusts people of color, and Arjun ponders that the “God of Jesus Christ was not the God Mrs. Buncombe worshipped in truth,” because Arjun had heard that Jesus Christ “had been the kind of man to hold out His hand to those in need of refuge.” Arjun laments that Western faiths have “no room for tolerance of any kind.”

The vampires Bastien, Odette and Hortense are all practicing Catholics. Arjun thinks Catholicism is the perfect religion for vampires, as Catholicism teaches that the literal body and blood of Jesus Christ is consumed in communion.

Pippa is also a devout Catholic, and she often thinks about what the right thing to do in the eyes of God is. She also cries out for God to help her on occasion. She believes that marriage is a vow given before God, and she and Arjun reference Proverbs 17:22—“A joyful heart is good medicine, but a crushed spirit dries up the bones.”

One character explains that the fey world was once referred to as Eden—potentially a reference to the Garden of Eden.

Arjun Desai’s father is Hindu, and many Hindu themes are explored as a result. It is not explicitly stated whether Arjun himself is Hindu. The book implies he may have given it up when it cost him the ability to be friends with a Muslim boy.

However, Arjun has a statue of Ganesha, the Hindu god of beginnings. He references a story from a famous Hindu book called the Mahabharata in which the prince Dushasana tried to disrobe Draupadi, but the god Krishna prevented it. Later in the story, the hero Bhima is so upset about Dushasana’s actions that “he vowed to break the chest of the man responsible and drink the blood straight from his broken body.” Arjun mentions that he always liked Bhima.

A family is referenced to move around occult circles and work in magic. Arjun prays to any gods listening for Pippa’s safety.

Familial issues blot out the skies in this novel.

Arjun’s father has his memory wiped when Arjun and his mother leave so that he wouldn’t be faced with the pain of losing the two ever again. Arjun says that he later ran into his father, and his father did not know who he was. This obviously has had a big impact on Arjun, who clearly loves his father and constantly wishes he could reconnect with him.

Arjun’s mother, General Riya, on the other hand, is cold and calculated. To be fair, she’s that way with everyone, so it’s not like she’s treating him differently. But that’s a problem in itself, as Arjun desperately needs more than just someone who allows him to survive in the fey world: He needs a mother.

Pippa’s parents are arguably even worse. Her father used to be kind and warm to her, but that was before the money ran out and the family name came to ruin. He’s a drunk, he commits insurance fraud and he sometimes physically beats her and her mother—and Pippa’s certain that he may try to hurt her younger siblings, too. So Pippa lights family property on fire, plants evidence that her father did it for more insurance money and watches as he goes to jail. Pippa’s mother never forgave her. And she drugs her own breakfast tea each morning as a result.

Celine’s mother, Lady Silla, who is the leader of the entire Sylvan Vale, is also a fey. But unlike the cold nature of General Riya, she uses pleasantry in order to manipulate those around her. She does genuinely love her daughter Celine, but she’s unafraid to torture and kill in order to help her, and she hides this from Celine, who sees her mother as amazing. However, her mother somewhat drops this disguise around the vampire Bastien, Celine’s lover, as Lady Silla makes clear that she does not approve of a vampire being with her daughter—and vaguely threatens to replace him.

There is a lot of violence in The Righteous.

Pippa’s father physically abuses her and her mother. Pippa is nearly shot by an arrow, and she is almost eaten by a living tree. Arjun and Pippa come across many injured magical beings, including one with a missing eye, one whose leg muscles are exposed and one whose wings have been intentionally shot through to make the creature never fly again. Many die by being shot by arrows and bullets.

Pippa is tortured with a knife by fey, and a satyr is tortured with arrows for information. Pippa and Arjun fight to survive a massacre. During the massacre, a character is eaten, and Arjun freezes a monster, causing it to shatter to pieces. Bastien references Celine fleeing to New Orleans after killing a man who tried to rape her.

“D–n” is used profusely, and “a–,” “b–ch,” “s-d” and “whore” are all used. The British explicative “bloody” is used multiple times, and “cad” is used once. God’s name is misused nineteen times.

There are multiple references to alcohol. Pippa’s father is a drunk. Arjun drinks multiple tumblers of the fey equivalent of absinthe, and he says that he’s only ever kissed women after drinking “copious amounts of fairy liquor.” Pippa’s mother mixes her morning tea with laudanum.

We hear that the amount of wine at an event would put Bacchus, the Roman god of wine (among other things), to shame.

Arjun overhears gossip regarding affairs and other sexual acts. Arjun references ways the fey “meant to improve the lovemaking experience.” Arjun’s hand accidentally falls on Pippa’s breast when they trip and fall. A fairy attempts to get Pippa to wear a translucent wedding dress that conceals nothing. Both Pippa and the fairy talk about her breasts and “bits.” Pippa kisses Arjun after he saves and holds her. The two also cuddle for warmth at one point. Pippa’s dress is cut open, revealing her undergarments. Arjun mentions that a friend back in India is characterized as “neither male nor female.” Arjun mocks a fey through sexual insults, including wishing that the fey’s mother would have used a condom. Arjun and Pippa are forced into marriage with one another—even though Pippa is already engaged to another man.

[Spoiler Warning] Late in the book, Pippa decides to stay with Arjun over her fiancé in New Orleans, and they soon after have sex.

Arjun risks his reputation, his future and even his life to protect Pippa in the Sylvan Vale. How does that make you feel about Arjun? Is he being selfless? Unwise? Loving? Does Arjun always do the right thing when he protects her?

Pippa struggles with her uncertainty and hesitation throughout the book. Have you ever had a moment when you’ve been unable to make an important decision? How did that turn out? Is hesitation ever a good thing? If yes, what is an example?

Arjun and Pippa contemplate what it means to be a family. What do you think a family is? Does family have to be related by blood, or can a family be made up of people who aren’t related?

Pippa believes that a home does not have to be a place. Instead, it can be a person or even a feeling. Do you agree with Pippa? Why or why not? What is a home? Can a person have multiple homes?

Celine and Bastien experience tension regarding Celine’s mother. Bastien does not like her, and Celine doesn’t understand why. What would you recommend the two do in this situation? How should a couple work through disagreements together?

The Righteous is part of a very popular series filled with mythical creatures and dangerous adventures, and it may well draw the attention of younger readers. The book teaches that our families aren’t necessarily limited to blood relatives, that we shouldn’t shoulder every difficulty alone, and that past experiences don’t have to define our futures.

However, parents should be aware that the book throws its characters into situations that are inappropriate for young readers. There are frequent references to sex and sexual leanings, multiple swears, mentions of alcohol and quite a bit of violence.