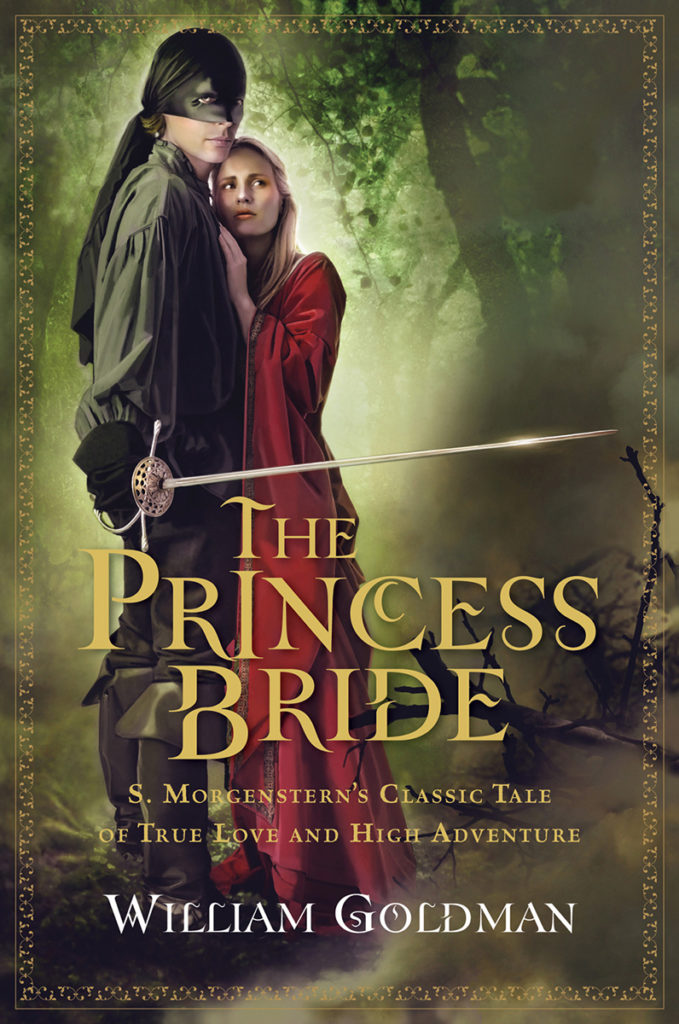 Princess Bride by William Goldman has been reviewed by Focus on the Family‘s marriage and parenting magazine.

As a child sick with pneumonia, William Goldman’s father read him a book titled The Princess Bride, which inspired Goldman’s love of reading. Grown up and with a writing career and a son of his own, Goldman gives a copy of this fictional book to his son as a birthday present — only to realize his father had been skipping whole chapters, thinking they would be boring for a 10-year-old.

Goldman sets out to write an abridged version of The Princess Bride, leaving only the exciting parts so that his son can enjoy it, too. This idea runs throughout the book, occasionally interrupting the narrative with comments about the publishing industry, Goldman’s childhood memories and his personal life.

Buttercup is a beautiful young girl who lives on a farm in the fictional European country of Florin. After several years, she realizes she’s in love with Westley, the quiet farmhand who has served her father for many years. Upon professing her love, Westley makes plans to move to America, in order to make enough money and have enough land to provide for Buttercup as his wife. Not long after he leaves, however, Buttercup learns that the Dread Pirate Roberts captured Westley’s ship — and the Dread Pirate Roberts takes no prisoners.

The King of Florin is very old and his health declining. His son, Prince Humperdink, makes plans to marry and, eventually, have a son who will take his place. At first, he plans to marry the princess from the neighboring country of Guilder, but upon learning the princess is bald, he decides to marry a girl from Florin — any girl, so long as she has hair.

Hearing of Buttercup’s beauty, Humperdink finds her on her father’s farm and demands that she marry him. Buttercup, emotionally stunted since Westley’s death, stresses that she does not and will never love Humperdink, but agrees to marry him, rather than risk death by denying the prince.

Buttercup spends the next few years at princess school, growing in beauty and knowledge. The evening after she is officially introduced to the people of Florin, she is kidnapped by three men: a devious Sicilian plotting war; a quiet Spaniard seeking vengeance against the man who killed his father; and a giant Turk who, for all his strength, is gentle.

The reader quickly learns that the trio has been hired to frame Guilder for Buttercup’s murder, thereby starting a war between Guilder and Florin. The Spaniard, Inigo, and the Turk, Fezzik, don’t want to hurt Buttercup, but both of them have their reasons for following Vizzini: He’s smart, and neither one of them can figure out how to get what they want without him.

Despite Vizzini’s best-laid plans to get Buttercup to Guilder undetected, a man in black follows the trio. This man bests Inigo in fencing, defeats Fezzik in a test of strength and tricks Vizzini into poisoning himself. The man in black treats Buttercup cruelly at first as they run from Humperdink, an excellent hunter who pursues Buttercup as soon as she is discovered kidnapped.

The man in black turns out to be Westley, alive after all. He explains how he had befriended Roberts, who eventually retired and gave Westley the title of “Dread Pirate Roberts.” His pirate ship waits to take them away from Florin and into their new lives together, but Humperdink catches them before they can escape.

Buttercup chooses to return to Humperdink rather than die with Westley, insisting that the prince return Westley to his ship. Humperdink agrees, but instead brings Westley to his Zoo of Death, a four-level subterranean zoo that houses all manner of animals the prince likes to hunt. Westley is tortured in the zoo for months. He is eventually placed on a machine that sucks life out of its victims, and painfully, he dies.

As Buttercup, Humperdink, and the rest of the country continue making plans for the royal wedding, Buttercup begins to regret leaving Westley. He had risked everything to find her, but she had left him anyway. Since his death, she hadn’t allowed herself to truly feel anything, but soon realizes she never stopped loving Westley. She tells Humperdink that she’d rather die than marry anyone but Westley.

Humperdink lies to Buttercup and assures her that he will send messengers to Westley in order to bring him back to Florin. The reader learns that Humperdink had hired Vizzini to kidnap Buttercup in the first place in order to start the war with Guilder, and since that failed, he plans to murder Buttercup after the wedding. During this time — between Westley’s death, Humperdink’s plotting and the idea that true love will not win the day — the author offers several lengthy passages about the unfairness of life.

Without Vizzini, Inigo can’t formulate a plan to find the six-fingered man who killed his father. In despair, he turns to drink. The day of Buttercup and Humperdink’s wedding, Fezzik finds Inigo and nurses him back to health. Fezzik explains that Count Rugen, Humperdink’s confidant, is the six-fingered man whom Inigo has sought for 20 years. Inigo, knowing he can’t make a plan on his own, searches for Westley, the man in black who outwitted Vizzini. He and Fezzik storm the Zoo of Death, only to find Westley (at this point, only recently) dead.

Undeterred, Inigo and Fezzik take Westley to Miracle Max, an out-of-work sorcerer who can temporarily raise people from the dead. They ask for a one-hour spell — just enough time to stop the wedding and kill Count Rugen — but Max, a little rusty on making miracles, realizes after they leave that the spell will only last for 45 minutes.

In spite of the time constraints, the three defeat the 100 men guarding the palace; Inigo kills Count Rugen, at last; Westley rescues Buttercup, although by now she is technically married to Humperdink; and Fezzik finds a way for them to escape. When the spell wears off, Westley prays for the strength to keep living. He declares he will never die, even as he begins to fade again, with Humperdink hot on their trail. S. Morgenstern’s narrative ends here, but Goldman adds how he thinks the story ought to end, repeating again that life is not fair.

God is mentioned occasionally, as a being that exists and has power over their world, but not necessarily one that demands their worship.

When Inigo expresses his discomfort at having to kill Buttercup, Vizzini tells him that God kills girls, so they shouldn’t feel guilty. In a dream in which Buttercup and Humperdink are married, Humperdink calls their child a gift from God.

While preparing to torture Westley on the machine, Count Rugen says the Serpent in the Garden of Eden was the embodiment of pain. When Humperdink suggests that Westley might not return, Buttercup responds by saying she believes he’ll return as surely as she believes in love and believes in God.

While waiting for Westley to save her from marrying Humperdink, Buttercup kneels at her bed and thinks of him, as if praying to Westley.

Count Rugen is convinced that the opposite of death is pain, rather than life. Several passages are influenced by Jewish culture, particularly in the interactions with Miracle Max and his wife. When Miracle Max’s spell wears off and Westley starts dying again, he prays to a being he calls the Lord of Permanent Affection to stay alive.

Buttercup’s parents are portrayed as constantly arguing. The sick king has little authority beyond his title, and his wife generally speaks for him. Humperdink uses his political influence to plot wars and hunt in exotic places. Vizzini views other people as lesser beings and treats his followers — Inigo and Fezzik — with derision and cruelty. When Inigo’s father is killed, Yeste, a friend of the family, takes care of Inigo for two years.

In a way, Goldman himself has the strongest authority role in the story, as he uses the supposed abridgement to tell (or not tell) the story in the way he wants it told. In a few places, Goldman interrupts the story in order to warn younger readers (anticipating their parents’ explanation of difficult passages) not to listen to their parents, that what he says is more trustworthy.

The following words appear in the text: h—, d–n, b–ch, and s—. Miracle Max calls Inigo a spick, which is a derogatory term for a Spaniard. God’s name and Christ’s name are used in vain a few times.

Vizzini and Westley both slap Buttercup. When Buttercup insults Humperdink, he pulls her by the hair from the room. Buttercup is knocked out after she tries to escape so they can make better time to the cliffs of insanity.

When Fezzik is first learning to fight, he accidentally breaks his father’s jaw. In Inigo’s first duel with Count Rugen, the count slashes Inigo’s face, leaving him permanently scarred. In their final duel, Inigo returns the favor, and also threatens to cut out Count Rugen’s heart. Other fights occur throughout the book. Humperdink kills several animals.

The prince and the count torture Westley, such as pouring boiling oil on his hands and putting him in a machine that sucks the life out of him.

Westley and Buttercup’s first kiss is not described, but the reader is told it was the best kiss of all time.

Introductions: This version of the book includes two introductions, one for the 30th anniversary, and an earlier one for the 25th anniversary of the book. Both include references to the actors and other people involved with the making of The Princess Bride the movie, and also speaks of S. Morgenstern as if he were a real person and Florin as a real place. Goldman also gives more details about his personal life in the introductions, including negative comments about his ex-wife and their overweight son, as well as an encounter with a younger woman that almost resulted in an affair. These additional sections aren’t necessary to read, but they help the reader understand the unconventional format of the story itself.

Buttercup’s Baby: This version of the book includes an epilogue — the abridged first chapter to what we are told is S. Morgenstern’s sequel to The Princess Bride, entitled Buttercup’s Baby. Like the rest of the book, Goldman interjects once in a while to explain why he removed certain passages. A lengthy note before Buttercup’s Baby explains why Goldman only abridges the first chapter. This section includes a scene where Buttercup and Westley are having sex, but the act is implied rather than described.

Women: The main narrative takes place in medieval times, and female characters, especially Buttercup, are treated more like objects rather than human beings with inherent rights and dignity.

Suicide: In a flashback, Inigo remembers his father, Domingo, and their friend Yeste arguing. Yeste takes out a knife and jokingly threatens to kill himself if Domingo doesn’t agree with him. When Buttercup realizes she’s in love with Westley, she declares she’d rather kill herself than marry Humperdink. When Westley doesn’t rescue her and she does end up marrying Humperdink, she returns to Humperdink’s chambers with the intent of killing herself, but Westley is there to stop her.