The Outcast — Prequel to the “Summoner” Trilogy 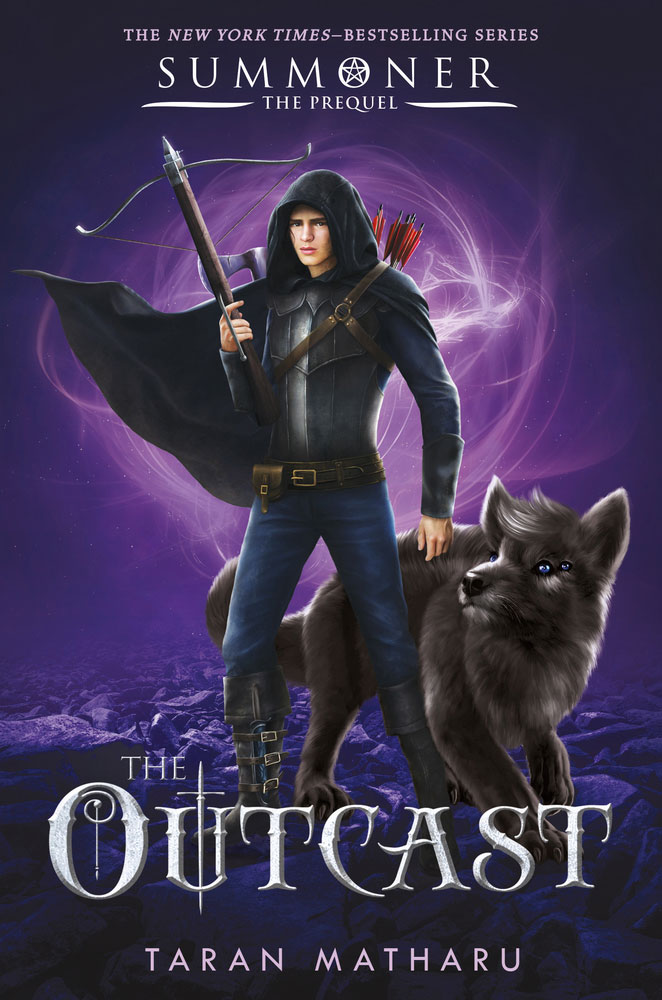 The Outcast by Taran Matharu follows the life of an orphan who discovers that he is a summoner and is sent to a prestigious academy to learn how to use his powers. It is the prequel to the “Summoner” series.

Arcturus is a 15-year-old orphan and stable boy, forced to work for a cruel innkeeper who regularly beats and starves him. When a young noble, Charles Faversham, stops at the inn on his way to Vocans Academy, Arcturus plans to steal his horse and saddlebags and finally escape. While going through the saddlebag, Arcturus finds a summoning scroll and leather.

Only those of noble birth are believed to have the ability to summon demons: animals from another dimension with special abilities, who bond with their summoner and fight alongside them. The scroll and leather are a way of transferring a demon from one noble to another, usually a parent to a child. Out of curiosity, Arcturus reads the scroll and summons a dog-like demon. Too weak from the summoning to run away, Arcturus is caught by Charles, beaten and held prisoner for the theft.

Since only nobles have been able to summon demons, Hominum’s King Alfric himself, along with Charles’ father, Royce, question Arcturus and determine that he is a summoner. The king sends Arcturus to Vocans to attend with other nobles, including Charles. Arcturus names his demon Sacharissa.

The two are given a shabby, drafty room, while all the other noble children live in luxury. Charles, Zachariah Forsyth and Rook are especially cruel to Arcturus and make fun of him for being a commoner. Edmund Raleigh, Elaine Lovett, Prince Harold and Alice Queensouth are friendly to him.

When the students go to their first class, Arcturus and 13-year-old Elaine are taught separately due to their lack of expertise in spells. Their teacher is Elizabeth Cavendish, a young lieutenant. Arcturus learns how to make a wyrdlight and other simple spells.

The next day in summoning class, an instructor, Scipio, uses his demon to show the students how to use a scrying stone to see through their demon’s eyes. When his demon enters the ether, the students see a wendigo and minotaur, two large and deadly demons, fighting.

After the class, Charles taunts Arcturus about his status as a commoner, with Rook and Zacharias encouraging the bullying. Prince Harold tells Charles to leave Arcturus alone and breaks up the group by inviting Zacharias to accompany him and Edmund into the city. Charles is disappointed he isn’t invited, and Arcturus mocks Charles.

The two argue until Charles challenges Arcturus to a duel in the summoning room that night. Arcturus spies on Charles and Rook, and by using Sacharissa’s keener senses, discovers Charles has information about him. Arcturus plans to run away from Vocans Academy with Sacharissa, but first he wants to confront Charles about the information he has.

But the duel is a trap. Charles’ demon binds Arcturus while Rook opens the portal that lets in the same wendigo they saw in the ether earlier. Before they leave him to die, Charles reveals that Arcturus is the illegitimate son of Royce Faversham, which makes him Charles’ half-brother.

Arcturus manages to escape the summoning room, but realizing that Elaine had snuck into the room, he rushes back in. Arcturus distracts the wendigo with wyrdlights, but it attacks him, and they fight. Sacharissa helps Arcturus, but he is eventually knocked unconscious.

Instructors from Vocans Academy save Arcturus, and he wakes up in an infirmary to find them monitoring him. Obadiah Forsyth, the provost, tells Arcturus that while some commoners have developed the ability to summon, Arcturus really is Lord Faversham’s son — a secret that must be kept from Lady Faversham.

Charles and Rook are expelled from Vocans for attempted murder and will be tutored privately on their family estates. Edmund invites Arcturus to join him and his friends for a weekend away at the Raleigh family estate.

King Alfric heavily taxes the commoners, while he and the other noble families prosper. The commoners have been rioting in the city of Corcillum and have made the area dangerous for nobles. Arcturus is reluctant to accompany the wealthy students, but he is also eager to leave Vocans. A servant, Crawley, has been trying to recruit him to join the rebellion, and Arcturus wants to be away from the man.

The group, along with armed soldiers, consists of Arcturus, Edmund, Prince Harold, Alice, her twin sister, Josephine, and Zacharias. Later they discover that Elaine had stowed away in their carriages. They arrive in Raleighshire and hunt recreationally until they realize rebels have followed them from Corcillum and are trying to capture them.

The young summoners and a few of their soldiers escape the town through a secret tunnel built by Edmund’s father. They follow it and reach a location outside of Hominum’s border. Then they must continue into the orc jungles to avoid capture. In the jungle, the group splits up. Arcturus, Alice, Edmund and Elaine go with one soldier, named Rotter. Harold, Josephine and Zacharias go with Sergeant Caulder.

On the run in the jungle, Arcturus’ group hides from orc raiding parties and sees an adult male orc beating a pregnant female orc. Arcturus and Sacharissa fight and kill the male orc, but the female has been beaten almost to death. She goes into labor, and the summoners help deliver an albino orc baby.

A large group of gremlins are traveling through the jungle and capture the sickly female orc, but the summoners hide with the baby. The group decide to leave the baby in a nearby orc village, only to be seen and pursued by an orc shaman. The shaman almost kills Arcturus, but stops his pursuit when he sees the baby, which he begins to worship. They leave the baby with him and escape.

As they make their way back to Hominum’s border, they find dozens of rebel corpses that had been attacked by an orc raiding party. Then the summoners are attacked by orc scouts. The summoners fight and win, but Edmund is badly injured and must be carried on a stretcher. At Hominum’s border, they find a group of soldiers who tell them that the leader of the army, General Barcroft, is responsible for the coup.

The soldiers do not agree with King Alfric’s policies, but they are reluctant to join the rebellion. They do agree to escort the nobles back to Vocans. At Vocans, they quickly realize that the academy is under siege by the rebels, who have also captured Prince Harold’s group. The other summoners are imprisoned, but Arcturus, the only commoner, is given a choice to join the rebellion.

Arcturus pretends to join the rebels at first, but with the help of a dwarven servant, Ulfr, he escapes and frees his friends. They take an underground river to the dwarven quarter of the city and hide until they form a plan. The commoners are rioting, and if Prince Harold doesn’t act soon, King Alfric and the other nobles will unleash their demons and massacre the people.

At the palace, Harold speaks to his father and announces that he will take the throne from Alfric and rule fairly. The commoners accept the change, and the rioting ends.

Arcturus is overjoyed that Alfric has been deposed and that Harold will rule more wisely than his father. But he is shocked to find that Harold will be king in name alone, as Alfric will continue to be in control of the country and none of his policies will change. Harold is equally disappointed, but powerless to make anything but small, secret changes.

Following the riots, Arcturus returns to the academy, happier than he was before, since he now has real friends. He is summoned to the provost’s office and introduced to three boys, all commoners. They look dirty and scared.

To his amazement, Obadiah tells him that they are all his half-brothers, Lord Faversham’s illegitimate sons. Arcturus is overjoyed, because after all the loss, suffering and bloodshed, he finally has the family he always wanted.

An orc shaman, a religious leader, chants and sacrifices a gremlin to summon a demon from the ether. The shaman also bows downs and worships an albino orc baby. Arcturus’ group takes shelter in an abandoned church.

Royce Faversham slaps his son Charles in the face. He also directs Charles to kill Arcturus, his illegitimate son. General Barcroft is cruel to his illegitimate son, Crawley. King Alfric is a poor ruler and father. He mistreats his soldiers and his people, and he manipulates his son. Alfric is scheming, hateful, racist and underhanded.

Arcturus’ demon is whipped, and a dwarven servant is beaten. Two boys try to murder Arcturus by tying him up and leaving him with a dangerous demon. Arcturus escapes but has to fight the demon to save Elaine. Both students and their demons are injured. The summoners’ demons fight along side them in every battle and are frequently injured.

The group witnesses orcs beating each other, and an orc shaman torture and sacrifice a gremlin. A pregnant female orc is brutally beaten almost to death. After killing her attacker, the summoners help deliver her baby.

Arcturus’ group finds corpses of dead rebels, and the scene is so gruesome, they vomit at the sight and smell. An orc chokes Edmund, and he is rendered unconscious for several days. After being captured by the rebels at Vocans, Arcturus uses magic and accidentally kills a rebel.

Arcturus is mortally wounded in a fight and only survives the stabbing by magical healing. He and Sacharissa fight and kill more rebels to free his friends, and even more die and are injured when the summoners escape Vocans and when they fight through the street to reach the castle.

Alfric is told that General Barcroft committed suicide when the news of the failed rebellion reached him.

Nobles are encouraged to have children as soon as they graduate from the academy. Only their first-born child is guaranteed to inherit the summoning ability, so if the parent dies in battle, they will leave behind another summoner to take their place. Elizabeth Cavendish married a servant she met at Vocans and they are expecting their first child together. Edmund and Alice are sweethearts.

Rotter thinks the pregnant female orc is a brood mare, forced to have children over and over again. The first-born children of orc shamans are summoners, so they travel from village to village impregnating vulnerable females.

*Book reviews cover the content, themes and worldviews of fiction books, not their literary merit, and equip parents to decide whether a book is appropriate for their children. The inclusion of a book’s review does not constitute an endorsement by Focus on the Family.*