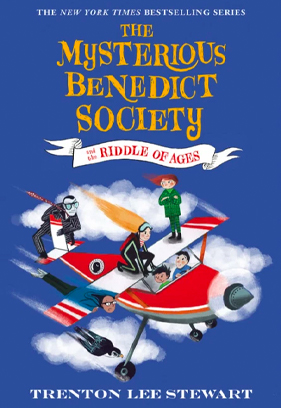 Deadly minions of a supervillian named Ledroptha Curtain have escaped prison, and it’s up to the four young geniuses of the fabulous Benedict Society—the intuitively perceptive Reynie, the scientific whiz kid Sticky, the physically hyper-capable Kate and the telepathically gifted Constance—to puzzle out a way to save the day.

Even members of a super-duper mystery-solving kids group have to grow up sometime. And so the incredibly intuitive and observant Reynie Muldoon Perumal, the shy but scientifically advanced George “Sticky” Washington and the athletically gifted and physically hyper-capable Kate Wetherall all find themselves in their mid-teens now. Why, even Constance Contraire, the Benedict Society’s telepathically gifted junior member, is almost 10.

Now, some would say, So what? I mean, being 15 years old is far from ancient. But when you’re a genius, you have to be thinking of your future.

Reynie has already gotten invitations to attend a number of respected universities, Sticky has been asked to run a vaunted science lab and Kate has an open door to start training as a special agent. The only one who hasn’t gotten a lofty invite yet is Constance, and she’s a little irked about it. But let’s face it: Constance is generally irked about everything and not someone whose bad side you want to be on. Her mental skills can leave you with a bad day in a heartbeat.

Anyway, the Mysterious Benedict Society members are all a little anxious about their choices in the near future. They’ve been working together for years now and the idea of splitting up and heading in new directions isn’t an altogether pleasant one for any of them. Hey, change isn’t easy, especially when it involves growing up.

But Reynie and the gang need to put those tug-and-pull feelings on a back burner for a while because they’ve got to figure out how to deal with a pretty big problem: the Ten Men have escaped from prison. These baddies are called the Ten Men not because there are ten of them—there’s actually a baker’s dozen of the dastardly dudes—but because they each knows at least ten ways to hurt you.

The Ten Men are the deadly crew of the supervillain Ledroptha Curtain, who just happens to be the genius twin of the Society’s genius benefactor Nicholas Benedict. (Hey, there are geniuses everywhere these days.) But the Ten Men have a genius for doing really bad things. And that’s especially true for the huge, massively muscled and highly polished lead henchman McCraken. After years of imprisonment, McCraken and the others have some scores to settle and some plans in the works. It’s plain that a lot of people could get hurt.

On top of that, the Ten Men have a mind-reading psychic of their own now—codenamed The Listener—so Constance has to use her mental skills 24-7 just to keep the baddies from learning what the good guys are up to.

What are the good guys up to? Well, they’re trying to stay hidden while coming up with a step-by-step plan to foil those dangerous baddies. Oh, and they’ve also found a 5-year-old telepath named Tai who the Ten Men want to grab and exploit. But protecting him means bringing him into their group. And Tai’s undeveloped skills are like sending out a mental beacon to anyone who knows how to listen for it.

Yes, there are mysteries to unravel, puzzles to solve, innocents to protect and massive hurdles for three teens and a tween to overcome. But they’re the Mysterious Benedict Society. And they haven’t just been getting older while working together over the last several years; they’ve been getting better, too.

Mind-reading and mind control are a big part of the action this go-round. Constance strains herself to the max to keep The Listener from figuring out what the Society is up to and where they’re hiding out. It’s clear that the Ten Men would have no compunction about causing physical harm to the teens if they could find them. And unfortunately, young Tai can’t control his thoughts and he’s all too often giving other people’s thoughts away. Constance pushes her abilities to the point of making herself violently ill.

Nicholas Benedict is a kind and loving man who has, in the past, adopted several of his young orphan charges. Unfortunately, Benedict isn’t able to lend much help to the kids this time because he needs to stay at a high security prison to not only keep an eye on his super-genius megalomaniacal twin brother, but work at keeping the powerful Ten Men from breaking his brother out. With that in mind (and because of The Listener) Benedict can only communicate with the Society through codes and puzzles—hoping that his very capable charges can figure out his thoughts and plans.

Several other adults lend the kids a hand. But because of the danger the Ten Men represent, Reynie and the others stay away from innocent people as much as possible.

There’s no foul language in the mix. The easily irritated Constance does growl and lash out at her compatriots from time to time, but it’s generally nothing more cutting than the equivalent of a really nasty scowl. The book tells us that it was “so much easier” for Constance’s friends to feel their love for her “when she was sleeping.” In other situations, the Ten Men use somewhat endearing terms such as “dearie” and “ducky” to address their young foes. But there’s always a sense of menace behind their friendly words.

Nothing gory happens here, but there are quite a few tense moments, threatening situations and instances where people get hurt, especially when it comes to the supersized baddie McCraken. He uses his bulk to push over a large trailer, for example, pinning someone beneath it and “lightly breaking” his legs. McCraken also thumps people around and picks up a motorcycle and throws it at a young girl, barely missing her.

The Ten Men are repeatedly noted to be “deadly.” And someone reading McCraken’s mind says that he’s thinking about “long lists of victims at hospitals and morgues.” But that deadliness is softened by the fact that the Ten Men don’t use guns or knives but tend to attack with weaponized office supplies such as a finely sharpened No.2 pencil. A couple of the Ten Men use watches that shoot out shocking wired electrodes, and we’re told that they use small bombs and lasers to get past locked doors and barriers.

We hear that someone’s parents were accidentally killed by badly combined chemicals. A number of people are knocked unconscious by knock-out darts. One person is hit with several empty darts, shot just for the pain of it. Someone wets themselves after drinking a chemical concoction. We’re told that two people drank a “pleasant poison” in a cup of tea and then they wait for someone else to deliver an antidote.  Someone uses mind control to get several people to render each other unconscious. Kate parachutes in and smashes several tables in her landing.

There’s one comment about some members of the Society having passing crushes in the past. And it’s mentioned that Sticky looks quite handsome in his new glasses. But there’s no other indication of romantic feelings. Constance goads a bad guy by telling him that his fly is down (though it isn’t).

What do you think it would be like to have a genius-level intellect? What would you want to do with all that brain power? Which of the Society member’s skillsets would you like to have and why? Even if you don’t have super skills, are there ways you can use what you do have to help others?

There’s a lot of discussion in this story about growing up and the way things change when you do. Do you ever think about that? Does it scare you? Does it make you excited? Are there things and people in your life that make a difference? How is your faith a part of all that? Your family?

The Mysterious Benedict Society books have been considered “modern classics” by many and were named a Time magazine “Best Young Adult Book of All Time,” along with selling millions of copies. And now the stories are being made into a TV series debuting on Disney +. That alone will draw the interest of parents and young readers. And this story’s twists and turns will be fun for people who enjoy puzzle and mystery solving. It should be noted, however, that this fourth book in the series can be a bit difficult to get into without having read the earlier trilogy. There are many characters to keep track of and it’s assumed that you know of them and prior events.