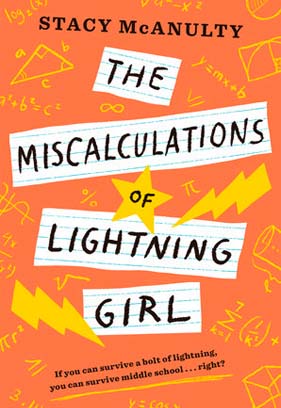 A lightning strike gave her a super power. Well, uh, sorta. After being struck by lightning, something incredible happened to Lucy Callahan: she became a math genius. It’s called an acquired savant syndrome. Problem is, that zap also gave her some really strange tics and a lot of numbers constantly running through her brain. Hopefully she’ll be super enough to survive middle school.

Lucy was only 8 when she was hit by lightning. She was out playing with a friend as a thunderstorm blew in. And just as she was climbing over a chain-link fence to head home, lightning struck the fence and sent her flying. She was actually dead for a little while, until someone used something called a defibrillator to zap her heart back into action again. And along with some bruises and burns, young Lucille Fanny Callahan woke up with something like a hole burned into her memory.

Oh, and she was suddenly a math genius, too. The doctors called it an “acquired savant syndrome.” Her uncle Paul calls it a superpower. Lucy sorta likes that one better.

But that’s kinda the problem, too.

So, when Lucy sits down in a chair, she doesn’t just sit like you or me. She sits. Then stands. Then sits. Then stands again. Then finally sits and stays seated. She can’t help it. It’s just what she has to do.

If an adult sees her going through these kinds of repetitive rituals, they might frown or shake their head or think, “Odd kid.” They’re usually polite about it. But fellow middle graders? Not so much. If someone her age sees her, they zone in on Lucy like there’s a sign on her back that reads: “Please Torment This Weirdo!”

Now, that hasn’t been a huge problem over the last couple years, since Lucy has been home-schooled by her grandmother, Nana. The only people she ever really interacted with were usually on some math site or calculus-focused forum. And they never see her. They just thought she’s cool because she’s so great at math. But that’s all about to change because Nana has decided that it’s time for Lucy to get back to school and start being with kids her own age.

Lucy was thinking she might study at some college, since she’s been taking college-level math classes already anyway. But Nana is adamant. A 12-year-old girl should be able to make friends with other 12-year-olds, as far as Nana is concerned. And Nana has her ways of getting her way.

Lucy hates the idea, but she and Nana make a deal: “Lucy will go to middle school for 1 year. Make 1 friend. Join 1 activity. And read 1 book (that’s not a math textbook).” Lucy isn’t sure what a girl with a super-brain, who does calculus homework for fun, can possibly learn in the 7th grade. But a deal is a deal. And it shouldn’t be that hard.

So why does she feel like this might be an equation that she won’t be able to work out?

Though not specifically Christian or faith focused, Lucy tells us that Nana tends to see “signs” in everything. She reports that Nana once said: “Sometimes the cosmos or God is trying to tell us something.” To illustrate that point, Lucy says that if Nana were to find a dollar, she might think it meant that God wanted her to go buy a Lotto ticket.

Later, when Lucy comes across an abandoned dog named Pi, she thinks that might be a godly sign, too, given her super-connection to math. And in spite of her germ-phobic obsession, Lucy draws close to the pup, doing everything to find it a home, since it can’t live in the small apartment with her and Nana. Then later, when it’s revealed that Pi is sick and might need to be put down, Lucy becomes impassioned to save the dog for as long as possible.

Lucy’s grandmother, Nana, is the most important adult in the girl’s life. That’s because her mom died when Lucy was a baby, and Lucy’s father abandoned them before that. The second most important person is her Uncle Paul, a soldier who comes home on leave when he can. Both Nana and Paul are solid, caring individuals who diffuse stressful situations with humor, and love Lucy dearly. At the same time, they hold her accountable for her choices and are always there to offer guidance.

Other teachers and parents in the story mix are caring and levelheaded for the most part. Because of Lucy’s quirks, and her refusal to explain them—since she wants to be seen as “normal” as possible—the adults around her can get a bit frustrated with Lucy. But when they begin to get a sense of her struggles, they always try to understand and help—in particular Lucy’s math teacher, who goes above and beyond to help in one situation.

The only adult that gives off negative vibes, is the mother of Maddie, one of Lucy’s classmates. This woman is always publicly correcting her daughter in passive-aggressive ways. And in turn, Maddie isn’t a very pleasant girl to be around. In fact, Maddie borders on being a bully. She and Lucy clash at times.

On the other hand, Lucy meets a tween named Windy with whom she becomes fast friends. Windy has a tendency to over-talk and spill other people’s secrets. But at heart she’s a solid friend. Lucy and Windy team up with a reluctant boy named Levi for a school project. And though they have their issues with one another, all three become friends as they begin working on a dog-rescue project that they all care about and apply their strengths to achieve.

No foul language or alcohol use.

We hear that a dog has been diagnosed with cancer and might have to be put down. Lucy gets upset and makes a foolish choice that leaves her out walking along a busy highway on her own. There’s a light sense of peril here as vehicles roar by the young girl. And then a car pulls off the highway and a woman beckons Lucy over, but Lucy wisely runs away. (Lucy is corrected for making dangerous, emotion-driven choices after reaching safety.)

We’re told that Levi has two mothers. Another child talks about her parents going through divorce.

In the book, Lucy eventually realizes that she suffers from something called OCD, obsessive compulsive disorder. It’s a condition that can create deep anxiety and the need to do things in patterns at times (among other things). Do you know anyone who deals with obvious physical tics or other effects of obsessive-compulsive disorder? Do you ever sense that you might be a little obsessive about things, too? How do you deal with that? How can you best help support friends who might suffer from what some would call unreasonable thoughts and fears, or the need to repeat certain patterns?

Because of her OCD tics, Lucy really didn’t want to go back to middle school. But in the end, she made some good friends and learned some good lessons. What does that say to you about stepping outside your comfort zones?

What did you learn from this book about friendship in general? Lucy, Windy and Levi didn’t really get along at first. What made that change?

Do you have things you’re really good at and things you care a lot about? What kinds of goals can you set for yourself to help others, even if in a small way?

Lucy’s family situation is a little different than that of many kids, but it seemed to work very well. Why do you think that is? How was Nana different from Maddie’s mom? What do you think makes a mom or dad a good parent?

There’s nothing much about faith in this story. But how do you think belief in God and the things in the Bible can help families when they face big challenges?

This is the first children’s novel from popular kid’s book author Stacy McAnulty. And it presents some interesting characters and situations that young readers can identify with, even if they aren’t math geniuses. The Miscalculations of Lightning Girl celebrates friendship and encourages kids to step outside their areas of comfort and try to help others in their world.