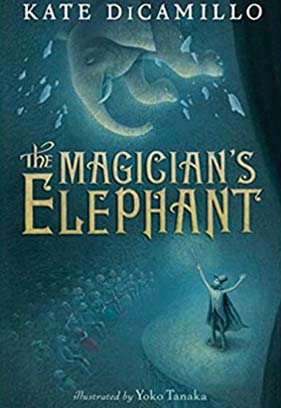 When the fortune teller says Peter’s sister is alive, he feels a surge of hope. However, to find her, he must follow an elephant—one that magically comes crashing through the ceiling of the opera house.

Orphan Peter Augustus Duchene walks to the market in Baltese to buy food as his guardian, the former soldier Vilna Lutz, instructed. But when he sees the fortune teller, Peter knows he can’t leave the market without asking about his long-lost sister, whom he’s been told is dead. The fortune teller confirms that Peter’s sister is still alive, but finding her won’t be easy.

“You must follow the elephant. She will lead you there,” the fortune teller says.

Peter doesn’t know of any elephants. Then one day he hears that a magician conjured one, which promptly fell through the roof of the city’s opera house and crippled Madame La Vaughn. The magician is in jail, and, since he failed to send the elephant back to where it came from, the pesky pachyderm resides in a horse stable.

Peter can’t find the elephant’s exact location. However, a countess who desperately wants attention soon buys the elephant and places it in her ballroom. Police officer Leo Matienne, who lives below Peter, tells him that the countess is putting the elephant on display the following Saturday.

Peter goes to the countess’s house and sees the elephant. He realizes that the poor animal is heartbroken and wants to go home, so he promises to help.

But how can a small boy help a mighty elephant get home?

Churches and priest are mentioned. Leo Matienne and his wife, Gloria, talk about how God didn’t intend for them to have children.

Fortune tellers predict the future accurately. A magician conjures an elephant, then later sends it back with magic.

Vilna Lutz is a former soldier who acts as Peter’s guardian. He lies to Peter about Peter’s sister being dead and overall is negligent. The nuns at the orphanage are kind. Leo Matienne is an honest and fair police officer, and he and Gloria become good adoptive parents.

The elephant crashes through the ceiling of the opera house when it’s conjured by the magician, landing on the lap of Madame La Vaughn, breaking both her legs.

Peter’s father dies on a battlefield and his mother dies in childbirth.

Read Ephesians 4:32. Why was it important for Madame La Vaughn to forgive the magician? Who was helped by her forgiveness?

Is there anyone that you’ve been holding a grudge against that you should forgive?

Why do you think Leo’s favorite question is “What if?” Why is asking that question powerful?

Though some of the magical and fortune telling content in The Magician’s Elephant might be problematic for some readers, the story offers a powerful glimpse into the importance of forgiveness, honesty, family and home.