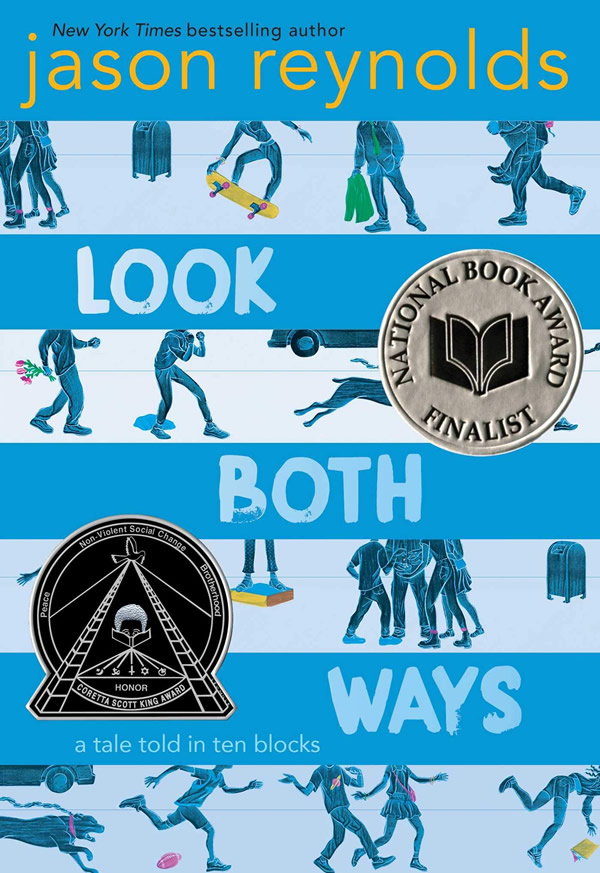 In Look Both Ways by Jason Reynolds, 10 slice-of-life stories filled with humor, love and friendship show what the world looks like for Latimer Middle School students after the last bell.

This book includes 10 slice-of-life short stories about kids who attend Latimer Middle School in an unnamed city. It explores the relationships, interests and experiences that make up their lives after the final school bell rings each day.

In “Water Booger Bears,” Jasmine and T.J. dispel the myth that boys and girls can’t be best friends. Jasmine has missed a lot of school due to her sickle cell anemia, but T.J. supports her and keeps her laughing. On their walk home, they discuss boogers at length.

John John, Francy, Trista and Britton (aka. Bit) call themselves the Low Cuts (“The Low Cuts Strike Again”). They’re notorious for stealing change. Each of them has a parent with cancer, and they’ve gotten to know each other well through the school’s support group. On this day, they sell candy to old men and use their earnings to purchase four cups of vanilla soft serve from the ice cream truck. They take it back to Bit’s house to give to his mom, who has just had a rough day of chemo.

Stevie Munson (“Skitter Hitter”) is frequently bullied by a boy named Marcus and his friends. Stevie is with these boys when a skater girl named Pia rides by. The boys make Stevie ride her skateboard, and he inadvertently breaks it. When he tells his mother about the bullying and how he was involved in the skateboard incident, she forces him to wait outside of school to apologize to Pia. Meanwhile, Pia has slipped out the back door and gone to the cemetery to visit her sister’s grave.

In “How to Look (Both) Both Ways”, Fatima Moss keeps extensive checklists of the things that happen to her. She notes what is the same as always and what is different each day. Her overly-cautious parents tell her she should never fail to pay attention because routine lessens risk. She always sees the same woman, Benni, on her way home from school. Benni, who may be mentally ill, plays imaginary musical instruments and asks Fatima how she will change the world. Fatima ponders the ways she would do this if she could break free of fear and routine.

In “Call of Duty,” a male classmate named Slim kisses Ty. Slim twists the story, and everyone thinks Ty did the kissing. As Ty tries to deflect the teasing from his friends, Ty’s friend Bryson steps in to help. Bryson gives Ty a big kiss on the cheek to show everyone it’s no big deal. But later, other boys jump Bryson. Classmates post the attack on social media. Ty and Bryson, both feeling awkward, reestablish their friendship by playing video games together.

Simeon Cross is huge for his age. Kenzi Thompson is small. “Five Things Easier To Do Than Simeon’s and Kenzi’s Secret Handshake” chronicles the ways Simeon protects Kenzi by helping him get through the crowded school hallways without getting crushed, among other things. Kenzi’s brother was convicted for a crime Simeon’s brother committed, which probably explains Simeon’s decision to be Kenzi’s protector.

Satchmo Jenkins (“Satchmo’s Master Plan”) still has a scar where a rottweiler bit him when he was seven. Recalling the painful incident with a neighbor’s dog, Satchmo panics when he learns a man who lives on his route home has gotten a pup. Satchmo talks himself through an elaborate escape plan as he walks home. In the end, the neighbor sees Satchmo walking by and invites him over to meet his sweet new friend.

Cynthia Sower (“Ookabooka Land”) wants to be a comedienne and always clowns around in class. She holds after-school comedy performances that are rarely attended, but she keeps hoping her mother will find time to watch one. Her main supporter and companion is her grandfather, Cinder, whose memory is failing.

In “How a Boy Can Become a Grease Fire,” Gregory Pitts’ friends love him enough to tell him how bad he smells. When he tells them he wants to let a girl know he likes her, Remar, Joey and Candace load him up with various fragrances. One accidentally gives him vapor rub rather than lip balm for his lips. It burns badly and hampers his attempt to woo his crush.

In “The Broom Dog,” Canton’s mother is a school crossing guard who was hit by a bus. She was back to work a week after the incident, but Canton continues to have panic attacks. Canton’s after-school companion, a custodian named Mr. Munch, helps Canton by making him an emotional support dog out of a broom. Canton carries it with him for nearly a year and runs his fingers through its hair whenever he feels afraid.

Jasmine and TJ (“Water Booger Bears”) attend the same church where they sing in the youth choir. TJ backs up his theory that humans are basically boogers by reminding Jasmine that God made man out of dust and blew breath into his nostrils.

Jasmine’s parents (“Water Booger Bears”) avoid drama in their separation and are careful to make sure she knows it isn’t her fault. Fatima’s parents (“How to Look [Both] Both Ways”) urge her to be hypervigilant about everything because it lessens risk. Cynthia’s mother (“Ookabooka Land”) works all day and goes to school at night, and Cynthia feels like her hero has no time for her. Her grandfather, Cinder, used to own a liquor store where he told dirty jokes in his own comedy performances. He supports his granddaughter’s aspirations. In “The Broom Dog,” Mr. Munch makes Canton a special pet from a broom to help him cope with anxiety.

The word “p-ss” appears several times. “Crap” appears once. Kenzi says a classmate acts like a puppet, as though someone had a hand up his butt controlling him (“Five Things Easier To Do Than Simeon’s and Kenzi’s Secret Handshake”). Cynthia tells a slightly off-color joke (Ookabooka Land”). Bryson’s classmates punch and kick him after he kisses another boy on the cheek (“Call of Duty”). Kids in several stories are bullied in the form of name-calling, pranks or physical violence.

Bryson and Ty (“Call of Duty”) are both bullied by classmates after a male classmate kisses Ty and then Bryson kisses Ty on the cheek in an attempt to lighten the mood. It is unclear whether any of the boys are actually attracted to other males. A boy who bullies Stevie (“Skitter Hitter”) draws a green penis on his school shirt. Cynthia’s grandfather lives with his girlfriend until her death (“Ookabooka Land”).

What do all the members of the Low Cuts (“The Low Cuts Strike Again”) have in common? What do you think about their stealing? When have you or someone you know had to watch a loved one endure a long illness like cancer? What emotions and behaviors resulted?

Why do Fatima’s parents tell her to pay attention and avoid risks (“How to Look [Both] Both Ways”)? What’s the difference between a good risk and a bad one? When have you taken a risk, and what happened? What happens to people who never take a risk?

Why do classmates bully Bryson and Ty (“Call of Duty”)? How does Jesus want his followers to treat people who are different than themselves, whether in race, beliefs or behaviors? What are some practical ways you can love people even when you don’t agree with them?

What causes Canton (“The Broom Dog”) to feel uncontrollably anxious and afraid? When have you been scared that something terrible might happen? Where can you go for help when you’re feeling this way?

To which of the characters in these stories could you most relate, and why? Which stories reminded you of things you’ve experienced? Since all people, like the kids in this book, are fighting unique battles every day, how should you treat the people around you?

You can request a review of a title you can’t find at [email protected]family.org.