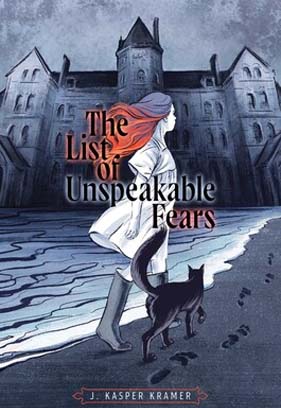 It’s 1910 and young Essie O’Neill is afraid of almost everything. Cats, doors, electric lights, hairy noses, ships of all kind: they’re all a little scary in their own way. And Essie keeps a list of each scary thing. Now Essie and her newly married mom are moving onto an isolated island with a hospital. It’s the same island sanctuary where the notorious Typhoid Mary was sent. Essie’s list is about to have a growth spurt.

You have a lot to be scared of in 1910. They have things called electric lights, and some say that the bulbs contain a gas that might kill you in your sleep. And surely you’ve heard of those newfangled devices called telephones. You could find yourself electrocuted if you hold it the wrong way. At least, that’s what you hear from people who talk about things like that. And let’s not even mention those frightening contraptions called indoor toilets.

Essie O’Neill is concerned with all those things and more. In fact, a whole bunch of not-so-modern things frighten her, too. She keeps a list of them all and calls it her List of Unspeakable Fears. Don’t ask her about it. I mean, it’s unspeakable. The only person Essie will talk about her list with is her best friend, Beatrice.  Beatrice is something of a budding detective, and she’s brave and knows about such things.

Essie, on the other hand, is anything but brave. She used to be able to do some semi-brave things, like walk up high on their tenement building’s fire escapes. But that was only because she was always holding her da’s hand.

But then Da got sick.

And then Da died.

Ever since, Essie has become more scared than ever. Cats, electric lights, thunderstorms, unlaced shoes, talkative strangers, licking envelopes … all of those dangerous things and activities are prominent on Essie’s list. And, well, let’s face it, they can all get you hurt in one way or another.

Now, however, it seems that Essie will have to steel herself for the toughest, scariest chapter of her life. She thought an empty, usually hungry existence without Da, in a poor part of New York City was bad enough. But now Mam has gone and gotten married again. And they’ll both be moving to a place called North Brother Island. It’s a cold rock of a place that’s home to a hospital which was created to care for the terminally ill.

Essie will have to move there. She’ll have to leave Beatrice. And then she’ll need to meet the bearded and villainous-looking doctor in charge of the hospital (who also happens to be her new father). Worse than all that, Essie will have to learn to survive in a place that could kill you at any wrong turn. Cholera, yellow fever, typhoid: you can find that and more at Riverside hospital.

Oh, and North Brother also happens to be the residence of the notorious Typhoid Mary, the disease carrier who accidentally killed an entire family.

Essie is very afraid that her list will soon grow very long.

Essie’s life has been touched and stirred by death—including the up-close and terrifying death of her dad and the stories of patients dying and people succumbing to horrible accidents. And so, Essie’s thoughts turn to the possibility of life after death. She begins seeing visions of ghosty visitations and spotting small footprints in the sand or wet prints in the hallway that others don’t see. She hears creepy ringing bell sounds and the creaking of old floorboards trodden by invisible walkers. She also finds a skull on the sandy shore near her new home. All of these things make her believe that the ghost of a young girl is trying to warn her of something. But the story raises the possibility that, other than the skull, her encounters were a part of her nightmares and semi-conscious sleepwalks.

At one point, Essie tells us that Mam had repeatedly suggested that she was too obsessed with death. But she tells us, “I tried to explain that I wasn’t interested in death. I was interested in avoiding it.”

Other than Da, the people who positively impact Essie the most are her devoted mother, Mam, and a maid in their new home named Fräulein Gretchen. Essie is unsure about the German housemaid at first, but she comes to accept the caring woman with time. And Gretchen does everything she can to help care for and protect Essie—even at times protecting her from her own poor choices.

Mam is loving and patient, even though Essie is having a very difficult time with the transition. In fact, Essie hates just about everything about the idea of her mother remarrying. But Mam sticks in there with loving hugs, patient ears and wise rebukes.

The person Essie has the most difficult time with is Dr. Blackcreek, the bearded doctor who tries to fill an empty parental role in her life. Essie hates the idea of him trying to “replace” her da, something quite impossible in her mind. And in fact, because of his own painful loss (of his wife and daughter) Alwin Blackcreek also has a difficult time with the transition into having a family once more. The connection is strange and awkward enough that Essie even begins to believe that Blackcreek is a murderer and recruits Beatrice to help her prove it. But as the story unfolds and a mystery is revealed, attitudes on all sides shift for the better.

Essie also meets and talks with Mary Mallon, otherwise dubbed Typhoid Mary. Mary isn’t actually evil, but she has her own demons to fight and generally steers young Essie in wrong directions. Essie makes some less than wise choices in her “investigation,” sometimes directly disobeying her mother’s orders.

No nasty language, but some characters do utter exclamations of “Dear God,” and “By God.” Essie talks of her father rolling cigarettes. And though never clearly stated, it’s implied that the man’s smoking led to his painful demise from cancer.

We hear of Da’s death, which happened when Essie was just a young girl of 7. She was the only one home at the time and not only did the passing traumatize her, but it left her with a crushing sense of personal guilt. We also hear in detail about a terrible disaster known as the sinking of the General Slocum, a fiery horror that sent more than 1,000 women and children to their death. That calamity—which happened near the real North Brother Island—directly impacts this story.

Essie recounts the dread of seeing this disaster take place from a long distance with her father. “We could see little bright spots of light … some jumped, some were thrown.”

While out looking for clues, Essie hides away and watches some interns carry a dead woman’s body to an autopsy lab. The woman is covered by a sheet, but her arm hangs out covered in red seeping blisters.

Essie is obviously obsessed with the things that frighten her. Sometimes even illogically so. Do you ever sense that you might be a little obsessive or a bit illogical about things, too? Do you make decisions that later might not make much sense? How do you deal with that? How do you think people should deal with fears in their lives? Are there good fears?

Biblical verses such as Matthew 10:31 and Isaiah 41:10 talk about fear and trusting that God will strengthen us. How do you think verses like that might apply to Essie’s list of fears? Have you turned to the Bible when you face something upsetting or frightening?

Essie also found herself disliking and fearing Dr. Blackcreek before she even got to know him. Why was that? Do you ever find yourself disliking someone even though you’ve never even spoken with them? What do you think is the wisest way to get to know someone who looks or acts differently than you?

This book is designed for middle grade readers, but it deals with a story and issues that at times feel much older. The tale is historical fiction with a ghost story twist. And it asks young readers to think about their fears—both good and bad—and discern which is which. The book also addresses the illogic of fearing other people just because they’re different from you. There are light encouragements here to trust science and research to address disease.