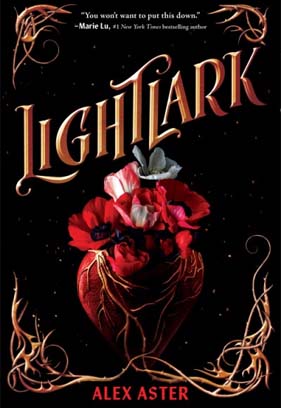 Due to a set of curses that have lasted for centuries, the island of Lightlark only appears once every 100 years. And when it does, the rulers of the world’s six realms compete to see who lives and who dies. But unlike the other competitors, young Isla has no magical powers to fight with. She’s just a young woman, skilled with a blade.

The Land is dying. And with it, all of the kingdom’s people. The world’s realms are crumbling, and life therein is being slowly drained away due to a set of curses that were cast long ago.

There’s only one way to break this centuries-long malediction: An event called the Centennial.

Every 100 years, the magical island of Lightlark appears. And while it is visible, rulers from the six realms—each ruler imbued with their own unique powers and abilities—are summoned to the isle in hopes of fulfilling a puzzling prophesy.

The last five Centennials have been dismal failures, filled with deception, destruction and death. And judging from the declining state of everything, this newest Centennial may be the world’s last chance.

Isla Crown, the young female ruler of the Wildlings, has been training for this competition since childhood. She is, however, at a great disadvantage. For while the other rulers have amazing powers at their beck-and-call—such as the Sunling king’s ferocious fire and the Starling ruler’s ability to create matter from thin air—Isla was inexplicably born with no power at all. That’s a secret that has been kept even from her own people. All this Wildling woman has is a beautiful face, a capacity for stealth, and some hard-earned skill with a blade.

Isla is sure, however, that her small proficiencies will be far too meager against her competitors; some who can kill with a mere thought or a wave of their hand. So any hope Isla holds comes down to what secrets she can seek out, who she can befriend, and what choices she makes.

For one thing is certain: the prophecy declares that its resolution requires one ruler—and every soul in his or her kingdom—to die. And everyone is convinced that the loser will be the weakest of the six.

This fantasy story is centered on magic. Even Isla has her hands literally on a bit of it, in the form of a magical wand-like device that teleports her to various places in the kingdom. Others use similar powers throughout.

But the magic is especially rooted in a set of curses that came about when the kingdom’s magical core was corrupted by someone’s murderous desire for utmost power.

The above-mentioned curses not only begin to degrade and destroy the kingdom itself, but they also force each realm to deal with some serious, and very realm-specific, limitations. For instance, the Sunling’s ruler might be able to harness the power of the sun, but he can’t stand in sunlight without being burned to a crisp and killed. The Wildlings, as another example, are supposed to possess the magical ability to seduce and manipulate anyone who looks upon their beauty. But they are, in turn, only sustained by eating human hearts, and if they ever fall in love, their curse compels them to murder their love interest.

During this year’s Centennial, one teamed pair of rulers search for Lightlark’s magical heart, an elusive source of power that’s key to breaking the curses. And in that pursuit, we see characters unleashing their powers to read minds in order to manipulate and tormenting others. One character is killed, and then is brought back to life by this magical “heart.”

It’s also stated that “whoever broke the curses by fulfilling the prophesy would be gifted all the power it had taken to spin them—the ultimate prize.”  At one point in her quest to solve the prophesy, Isla encounters a witch-like oracle who give Isla riddling insights. But she also tells Isla, “Know this, there are lies and liars all around you, Isla Crown.” …

[Spoiler Warning] … And that oracle’s clue plays into nearly all of the relationships that Isla forms while on Lightlark. In fact, Isla learns that nearly everyone she meets (and everyone she already knows) has been lying to her in one way or another.

There is only one person who always tells Isla the truth. And that individual—though not trusted through much of the tale—eventually helps Isla find the truth she seeks and saves her from those who want to take advantage of her trusting innocence.

Many of the characters we meet are selfish and power-hungry, and Isla must continually try to figure out this world’s political undercurrents and back-stabbing ways. For the most part, however, Isla herself is an innocent individual who stays true to her moral compass, despite all the manipulation around her. (That said, it should be mentioned that Isla’s moral compass isn’t a biblical one. Even though she has been kept protected and innocent through much of her young life, for instance, Wildlings freely welcome sexual interactions without commitment.)

Dinners and events feature wine-like beverages. Isla—who has never had an alcoholic beverage—drinks a cup of the wine at one event and becomes dizzy and inebriated. She begins ripping off parts of her outfit and acting strangely because of the stifling heat brought about by the beverage.

Isla repeatedly finds herself in dangerous situations where she’s threatened by the magical characters around her or put to the test in physically strenuous and potentially deadly physical situations.

In one scene, for example, Isla is attacked by a living thornbush-like organism that wraps her in its embrace and drives its long spikes into her back. Not only must she free herself and pull thorns out of her flesh, she must deal with the excruciating pain of tearing out the deeply embedded hooked spikes. The result is bloody and painful. Similar scenes crop up frequently.

Isla is forced to swallow a piece of a bloody heart, which she later retches over. She’s frozen solid and carted off by men intending to cook and eat her. She’s stabbed, slashed, burned in a raging fire, battered around and choked.

Isla is sexually innocent when the story begins. But she and a male character eventually become very flirtatious, and she is dramatically swayed by her attraction to him. She also wears fairly skimpy outfits, due to her “expected” Wildling nature—which paints her in other’s eyes as a beautiful temptress. Those outfits have their desired effect on some male leaders.

Two men become very attracted to Isla. One of them embraces and caresses her. And Isla’s mutual attraction to this individual leads them to a scene where the two kiss and make out passionately. The scene isn’t starkly painted, but it certainly implies that the interlude is at least somewhat sexual and includes the removal of clothing. Isla looks admiringly at the muscular torso of another man who removes his shirt.

We’re told that one of the male leaders once had a husband. And we also find out that Isla had an intimate relationship in the past, but her love interest betrayed her and magically stole away her memories.

This YA fantasy novel is somewhat reminiscent of books in the Hunger Games and Divergent series. And it deals with questions of loyalty, betrayal and honorable choices.

This book, however, tends to deal much more with the political aspect of its magical realm than the other books mentioned. And parents of young readers should also note that there are life-threatening moments of peril here as well as some lightly steamy romantic scenes.