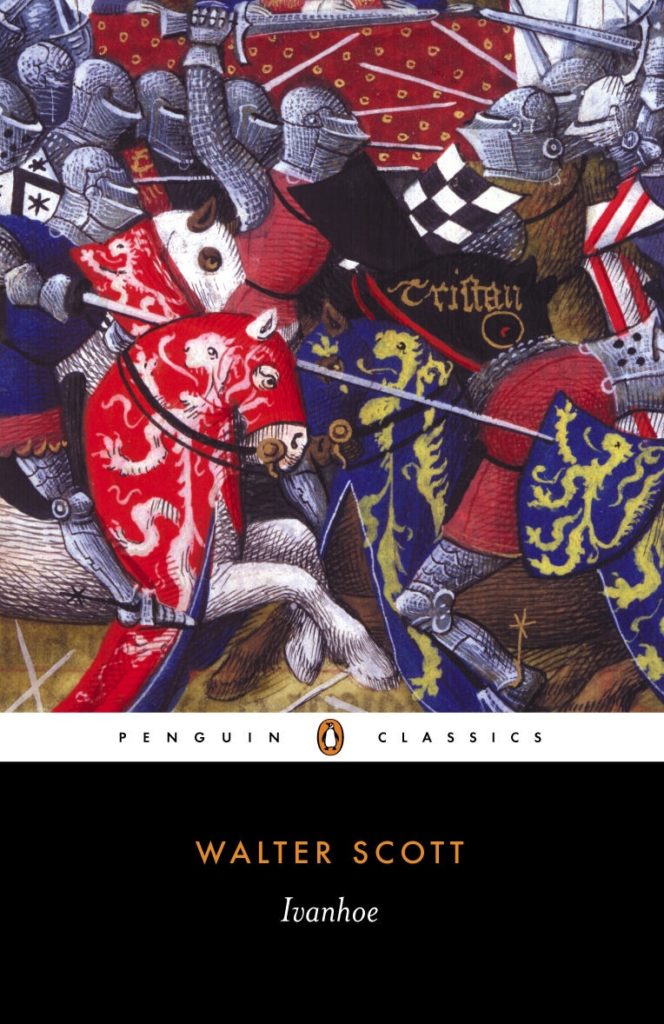 Ivanhoe by Sir Walter Scott has been reviewed by Focus on the Family’s marriage and parenting magazine.

England is in turmoil: Hostilities have intensified between the Normans and Saxons, and Prince John mans the throne in fear that his brother, King Richard, will return alive from the Crusades. Ivanhoe, after being disinherited by his father, Cedric, has joined King Richard — so his reappearance at a jousting tournament shocks Prince John and his allies. On their return home from the joust, Cedric, his ward Rowena (whom Ivanhoe loves), Rowena’s betrothed, and Isaac and Rebecca (a Jew and his daughter who help Ivanhoe in secret) are all kidnapped by John’s adviser, Maurice de Bracy, who wants Rowena for himself. All are freed by Robin Hood and the Black Knight except Rebecca, whom Knight Templar Brian de Bois-Guilbert has fallen for and kidnapped. Templar leaders, believing Rebecca has bewitched Bois-Guilbert, put her on trial for sorcery. Ivanhoe saves Rebecca, the Black Knight reveals himself as King Richard, and Ivanhoe and Rowena are married.

Critics note Scott’s not-so-subtle criticism of the medieval church in Ivanhoe. Bois-Guilbert, who belongs to the holy Templar order of knights, kidnaps Rebecca and threatens to force himself on her. One clergyman, Prior Aymer, has a reputation for his worldly behaviors such as carousing with women, and another friar drinks excessively. The church is highly political and hostile to the Jewish race. In fact, anti-Semitism plays into Bois-Guilbert’s decision to put Rebecca on trial. Rebecca, a Jew, proves to be the most genuinely faithful and God-fearing character in the book.

The Grand Master of the Templar believes Rebecca must be a witch; why else would a Christian knight behave so erratically over a lowly Jew? Though the book seems to indicate she simply was trained in the art of healing, like a physician, the Grand Master attributes her ability to help the sick to sorcery and Satan.

Sir Walter Scott uses Isaac and Rebecca to demonstrate some of the standard beliefs and behaviors of 12th century Jews — the treatment they receive from many other characters reveals the anti-Semitic atmosphere of the age.

Scott portrays King Richard as a thrill-seeker, more concerned with crusading than with his kingdom and subjects. His brother, Prince John, is power-hungry and intends to ensure that Richard doesn’t live to retake the throne. In his zeal to see Saxons return to power, Cedric disinherits his son when Ivanhoe falls for a woman Cedric plans to give in marriage to a Saxon of noble blood. Religious leaders (like Prior Aymer) demonstrate repeated hypocrisy rather than serve as examples of faith and piety. Bois-Guilbert (a knight) and de Bracy (an adviser to Prince John) kidnap the women they want to marry.

Words like a– and d— appear once or twice. Isaac makes frequent vows and exclamations using the name of God and other biblical characters.

The narrator suggests that Norman men during this time period were so lawless that their wives and daughters often sought shelter as nuns to preserve their honor from the “unbridled wickedness of men.” Bois-Guilbert, through innuendo, threatens to rape Rebecca if she refuses to submit to him.