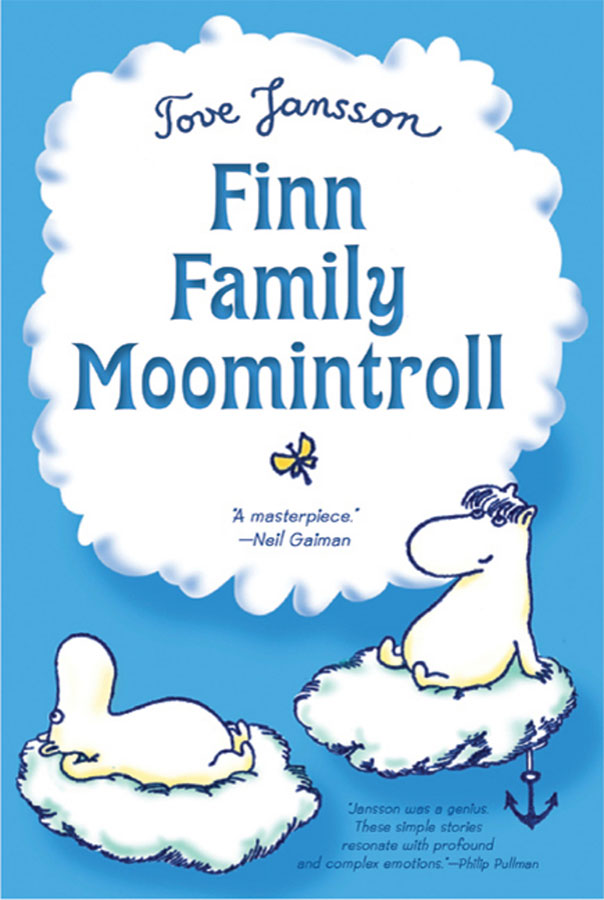 Moomins are white cartoon creatures resembling hippos. Moomintroll and his parents, Moominmamma and Moominpappa, live in a house in Moominvalley with a handful of non-Moomin friends. Mommintroll’s best friends are creatures named Sniff and Snufkin. The book includes a number of comic illustrations and a picture gallery to introduce readers to the characters.

After hibernation, the Moomins awaken to enjoy the spring. Moomintroll and friends find an enchanted top hat. It belongs to the Hobgoblin, a magician who flies through the universe on his panther looking for the King’s Ruby. The hat modifies objects that are left inside of it. Egg shells become rideable clouds, and dentures transform into something frightful. Moomintroll’s appearance changes after he hides in the hat, and his friends are confused.

In another chapter, the Moomins and friends use their boat, The Adventure, to sail to Hattifatteners Island. The Hattifatteners, who are walking worm-like creatures, are obsessed with weather and often consult their barometer. When they think the Hermulen (one of Moomintroll’s “adopted” family members) is stealing their equipment, they surround him. Snufkin rescues him.

The Moomin group is stuck on the island that night because of bad weather, so they make a shelter out of the boat. Hattifatteners break in and retrieve their barometer from the Hermulen. The Snork Maiden’s hair gets burned off in the fray. The next day, the Moomins and friends explore the island and find ruins of an old ship and gold. Then they return home.

While Moomintroll and the other youngsters are out fishing in stormy waters, Moominmamma accidentally drops some of the Hermulen’s poisonous plants into the Hobgoblin’s hat. By the time the kids return with their gigantic Marmeluke fish, the house is covered from top to bottom in jungle plants. The group cuts through the branches and uses them to make a bonfire on which they roast the Marmeluke.

Thingumy and Bob innocently take other things, like Moominmamma’s purse. When they return it, she is excited and throws a party. Thingumy and Bob show Moomintroll their suitcase contains the massive color-changing ruby, which the Hobgoblin wants.

The Hobgoblin arrives at their party and asks for the ruby. Thingumy and Bob refuse to hand it over. The Hobgoblin surprises everyone by granting wishes for the party guests. When they learn he can only grant wishes for others, not himself, Thingumy and Bob wish for a Queen’s Ruby identical to the King’s Ruby. They give it to the delighted Hobgoblin. Everyone eats, drinks and dances until dawn.

Moomintroll finds a hat that casts a spell on the valley and causes strange things to happen. When something lies in the hat long enough, it begins to change into a different object. The narrator calls a bird flying east a good omen and the Moomins believe sailing away in a boat that hasn’t been christened is bad luck.

Moominmamma is described as moral but broadminded, and the loyal Moominpappa is a storyteller and a dreamer. They welcome a number of non-family members to live in their home.

Moomintroll and the Snork Maiden like each other, and she lies with her head in his lap a few times. Other characters are present when this is happening.

Misbehavior: Snork defends Thingumy and Bob when they steal a suitcase. Snork contends the two were born without the ability to see the difference between right and wrong.

Historical note: Jansson’s Moomins are iconic in Finland. Besides being the subjects of books and comic strips, the Moomins have their own theme park in the Finish town of Naantali.