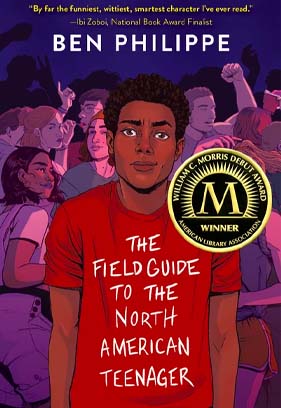 Norris Kaplan is a Black French-Canadian teen with a bit too much cynical snark for his own good. At least that’s what his mom repeatedly tells him. And when he’s transplanted from Montreal down to the blistering climes of Austin, Texas, he gets a first-hand view of how his American high school experience—and maybe even love—will be impacted by an abundance of sarcastic wit.

Norris Kaplan is a really great guy. He’s bright, witty, gets good grades. And Norris can be a fabulous and loyal friend when you get to know him. But getting to the point of actually knowing him is the problem, because Norris also has an abundance of cynical snark that comes gushing out of his mouth like a ruptured dam at the slightest provocation. People can find it funny, but it’s usually pretty caustic. And depending on who his acerbic barbs are aimed at, it doesn’t win him many friends.

Norris’ mom, Judith, reminds her son repeatedly of that fact and encourages him to figure out how to rein in some of his sarcastic wit. He especially needs to do so now that the two of them—after her friendly but definitive divorce—are moving from Montreal down to Austin, Texas. She’s got a new university teaching gig and wants her son to fit in and make things work.

Norris, however, isn’t really taking to heart much of anything his mother is saying right now. He’s barely making it through Austin’s blistering, Hades-level heat. (Sweat soaking a T-shirt every couple of hours is an actual thing here.) And when you heap on the fact that he’s a French-Canadian Black guy plopped down in a gigantic warehouse of a high school packed, seemingly, to the brim with white, bouncing, ponytailed cheerleaders and Cro-Magnon-level, grunting football players, well, Norris isn’t exactly feeling happy about life at the moment.

That tends to make him share his, uh, discomfort from time to time. The fact is that making a ton of friends has never really been a priority for him anyway. The best he hopes for is being able to at least amuse himself (and occasionally don a dry T-shirt) until it’s time to go back to Canada, where he belongs.

After first checking into the huge and sprawling Anderson High, his guidance counselor hands him a small notebook and suggests he keep track of his transition in the form of a diary of sorts—something that can help him see how quickly he’s adjusting. Instead, Norris uses it as more of a burn book–a field guide you might call it–that will help him curb just a bit of his onrushing verbal cynicism while he struggles to stay sane.

Oddly, though, Norris eventually starts crossing paths with people he doesn’t automatically want to verbally spar with. There’s Liam, a large, depressed-looking dude who, shockingly, wants Norris to teach him how to skate. And Aarti, a gorgeous Indian-American teen who’s equally appealing as she is mysteriously independent (and kinda stand-offish). He also meets Maddie, a self-sacrificing, blonde cheerleader who’s actually open to giving Norris a bit of Aarti-romance advice.

Bit by bit, Norris starts to wonder: Could he possibly make friends here?

There are no references to anyone’s faith other than Maddie mentioning an upcoming wedding and recognizing that Norris isn’t a “church guy.” There’s also a crude, lewd comparison of the way guys see spring break to how others see Christmas.

You could easily say that the book has an underlying assumption or belief that America struggles with widespread racism. There are references to other parts of the U.S. (and other parts of Texas) that are automatically assumed to be racist and anti-Black. And Norris mentally assumes that other teens at his school dislike him solely because he’s Black—even though no one he meets ever voices anything of that sort. (He, on the other hand, makes negative comments about generalized “white” behaviors and appearances.)

Norris’s mom backs up some of her son’s beliefs. When Norris gets drunk one night, mouths off to a police officer and is arrested, Judith takes it for granted that he had a 50-50 chance of being shot and killed in that encounter simply for being Black. She lists the names of other well-known Black youths that were killed, in her belief, for the same reason.

All of the above said, however, Judith never pushes Norris to react negatively to the assumed racism of the world. Just the opposite, in fact. She encourages her son to be wise in his encounters with everyone he meets. She believes in his ability to win over the world with his wit and intelligence—especially when he uses those gifts to care for and befriend others. And she does everything in her power to make Norris’ move to Austin a success—even if some of those things, designed to earn him friends, end up irritating him.

In fact, both of Norris’ parents take steps at times to show their love and support for him. The story recognizes the damage that their divorce (and some “new family” choices) has wrought on Norris’ world. But it also stresses that life can move on and love can overcome difficult situations.

Maddie’s father, Jim, and Aarti’s mom and dad are also portrayed as loving, concerned parents. They all have their personal weaknesses and each make some choices that frustrate their kids at times, but there’s no question that they love and want the best for their children.

Nasty profanity and heavy drinking are both major problem areas for this book. It is assumed that teens use the foulest language (blending f-and s-words and a lexicon of other crudities with blasphemes of God’s and Jesus names) and get drunk whenever they can get away with it (to projectile-vomit levels in some cases). In fact, since this tale is buoyed by witty repartee and humor, obscene crudities and drunkenness often pop up out of the blue with the intention of eliciting surprise giggles.

We hear the story of one teen who slumped into an overpowering depression and breakdown and then attempted suicide with a prescription drug overdose. He’s discovered by a family member and saved in the nick of time. He later makes clear to friends that his choice was a mistake, and he talks of the necessity for an ongoing struggle to live a happy and constructive life in the face of depression. He mentions antidepressants and other drugs he must take.

Norris is thrown down on a staircase by a large guy he clashes with. And we read about a few on-ice checks, thumps and tumbles that happen after Norris and Liam start a local hockey team.

Judith goes out on a few dates after she and Norris arrive in Austin and Norris mentions that she’s “probably off having sex” somewhere. Norris’ dad has also remarried and started another family. And it’s implied that this new love connection was key to Norris’ parents’ marriage crumbling.

Not long before leaving Canada, Norris’ best friend, Eric, revealed that he was gay. And throughout the course of the story the two friends talk about Eric’s new boyfriend back home and his coming out to his parents. Norris also becomes very protective of a gay perspective and gets angry when another guy uses the pejorative term “f-g.” Ironically, he becomes so incensed that he can’t even repeat that “F-word” while his other f-words are no issue at all.

This William C. Morris award winner has been highly praised for its humor and its approach to both the American high school experience and the modern teenage mindset. And it does indeed entertain with whip-sharp dialogue and a suggestion that unexpected friendship can blossom even in the midst of what at first seems an impossible situation. However, parents and teen readers should be aware that author Ben Philippe’s tale is also a bumpy ride filled with profanity and crude dialogue, heavy drinking and an underlying belief in systemic racism.