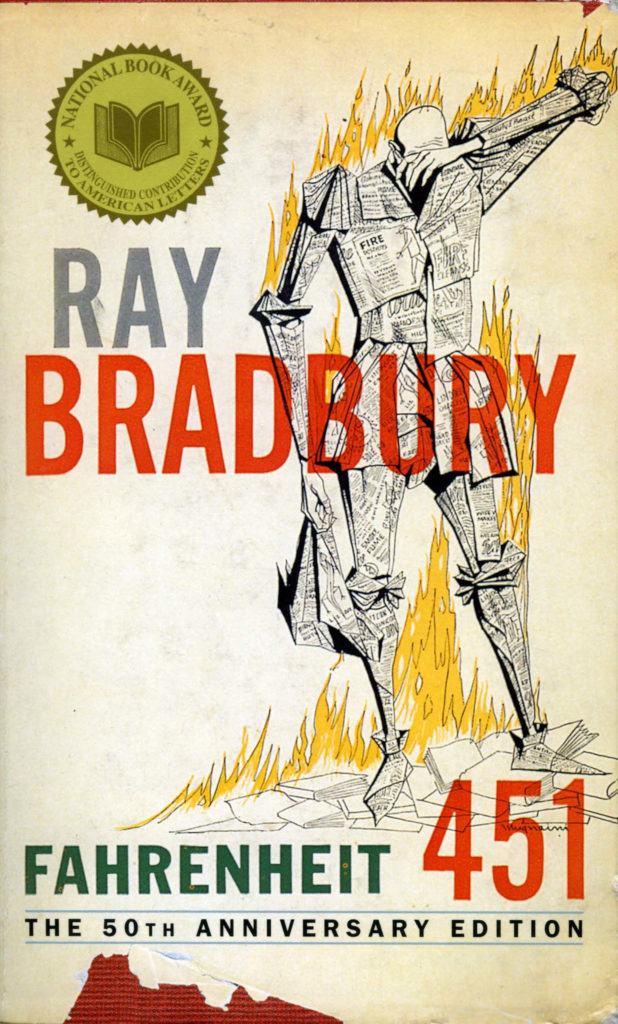 Fahrenheit 451 by Ray Bradbury has been reviewed by Focus on the Family’s marriage and parenting magazine.

In futuristic America, all houses are fireproofed so traditional firemen are unnecessary. Firemen like Guy Montag are paid to start fires. They burn the houses of anyone found in possession of books. The society has determined books single out minorities and keep everyone from being equal. Books point out unpleasantness in the world or in history, and they cause people to ask too many questions. In short, they keep people from being happy. Since Americans prefer to be entertained and lulled into a false sense of well-being, books must be eliminated.

Noise and electronic media have taken over the culture. Montag’s wife, Mildred, spends most of her time in a room in their home with huge screens on the walls. The monitors produce constant noise, activity and drama, even though there is little plot or substance in the shows.

Mildred calls the characters her family and has paid extra to have her name inserted into the programming. Montag’s boss, Captain Beatty, says firemen are the people who keep their fingers in the dike, destroying books so the country won’t slip into despair. Beatty says cramming people full of noncombustible data will make them think they know a lot and keep them happy.

Meanwhile, other countries are preparing for war against America. Citizens ignore the planes overhead, convinced all is well. They’ve been told it will be a quick war, just a day or two. And they know it’s always someone else’s loved one that dies in a war.

Despite society’s obsession with happiness, people frequently kill themselves or attempt suicide. Mildred overdoses on sleeping pills one night. Montag calls the appropriate people to pump her stomach, and she has forgotten the incident by morning.

Montag begins to question his life and occupation when he meets a strange teenage neighbor named Clarisse. She talks to him like no one else has about ideas and history. One day, she vanishes. He later discovers she and her family have been taken away or killed for their subversive ideas. Montag begins to wonder about the past. He asks his boss, Beatty, if it’s true that firemen used to put out fires rather than start them. It turns out Montag has stolen a number of books from the scenes of various fires. Beatty suspects Montag has a book and tells him he has 24 hours to look it over and return it. Then he can decide whether to continue being a fireman or to rebel.

Montag seeks out a man named Faber with whom he once had a lengthy discussion at a park. He knows Faber is a man with books, and he wants to learn more about the time in history when books mattered. One of Montag’s rescued books is the Bible. On his subway ride to Faber’s house, he tries to memorize parts of Ecclesiastes. A commercial blares repeatedly through the subway speaker system, making it nearly impossible for him to think or remember.

Faber reluctantly lets Montag into his home. He’s a fearful old man who regrets he hasn’t taken a stand for his beliefs about the importance of books. Montag asks Faber to teach him about books. Faber explains that for books to be valuable, they must contain quality information. A person must also have the leisure time to digest them and the freedom to carry out their ideas. Faber and Montag concoct a plan to reprint books and to plant books on firemen in an effort to subvert the system. Faber gives Montag an earpiece he’s made so the two can communicate.

Montag returns home to find his wife and two of her friends watching “the family” in the parlor. He turns it off and urges them to talk about something important. They proceed to share their shallow, selfish and uninformed views on the war, politics, children and other topics until Montag is livid. He pulls out a book and makes them listen while he reads a poem. The poem makes one of the women cry. Unhinged by the depth of her emotion, she leaves and vows never to return to the Montag home.

Montag returns to the firehouse. He gives a book to Beatty, pretending it is the only one he has. Beatty is well read himself, but he quotes the writings of famous authors to suggest that knowledge simply makes people discontent. Faber, hearing the conversation through the earpiece, tries to keep Montag from buying into Beatty’s rhetoric. Montag sits down to play cards with his co-workers. They’re called to start a fire, and the truck arrives at the Montag home. Mildred drives away, and Montag learns she reported him. After Beatty forces Montag to burn his own house, Montag blasts his boss with fire and kills him.

Montag, now on the run, escapes to Faber’s house. Faber gives him some tips on how to hide and where to go. As Montag flees the city, numerous media outlets follow the manhunt. When they can’t catch him, they kill someone else and report Guy Montag has been eliminated. Montag finds a group of men on the outskirts of town who keep books alive by memorizing them. The war begins, and enemy bombs demolish the city. The book men continue to memorize what they can and hope to educate others as society is rebuilt.

Montag saves a number of books, including a Bible. He tries to memorize parts of it exactly so the text won’t be lost if and when the book is burned. His wife asks him what’s more important, her or the Bible. Faber reads him the book of Job through the headphone. Faber says he was never a religious man, but the Bible text is as good as he remembered.

He notes that Christ has been distorted so much by the culture that God probably doesn’t even recognize His own Son. Beatty points out that the Devil can use Scripture for his purposes. Montag starts to tear pages from the Bible to jar Faber out of his complacency and fear.

After escaping the city, Montag meets a reverend and some other men who are attempting to keep books alive by memorizing them. When Montag tells them he thinks he has memorized a good part of Ecclesiastes, they tell him he is the book of Ecclesiastes now.

Those trying to save books memorize the sacred texts of many faiths.

Mildred’s friend Mrs. Bowles has two children. She expresses no love for them and says she manages them by keeping them in school or in front of screens most of the time. Beatty allows Montag to keep a book but later punishes him for it. The men attempting to save books realize they can’t force the written word on anyone. They hope the war will open people’s minds and eyes, making them willing to revisit the idea of reading.

As entertainment, firemen release chickens and cats for the Mechanical Hound to track and kill. A woman chooses to stay in her home and be burned alive with her books. Montag’s wife, Mildred, admits to running over animals with her car and enjoying it. She overdoses on sleeping pills, and a medic mentions that suicide is common in this society.

Teenage drivers try to run Montag down just for fun. One teen explains that kids her age live a violent life, shooting each other or dying in car crashes. Montag kills Beatty with his flamethrower. Montag beats other firefighters unconscious. Bombs destroy a city.

Pornographic magazines are widely available because the society craves titillation. Brief references are made to “wild parties,” “rape” and “gang rape.” These references do not contain details. One woman is known to have had several abortions. Mildred’s friends have each been married and divorced multiple times and speak of relationships flippantly.

Abortion: Montag suggests Mildred’s friend has had a number of abortions.