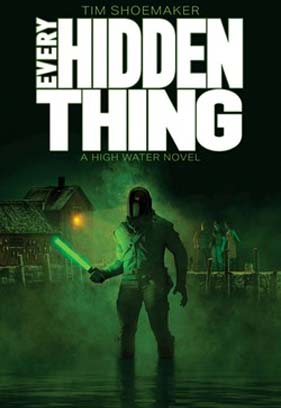 After a series of strange destructive happenings and a local teen’s death, the residents of Rockport are on edge and afraid it’s all the work of a ghost. Parker Buckman doesn’t believe in ghosts. He does, however, believe that God will help him reveal the truth.

Parker Buckman’s not worried about invisible things that go bump in the night. He’s not a guy who believes in ghosts.

But Parker’s no idiot either. He knows that there are things that hide in the night that can hurt people. His heavily scarred arm—once chomped on by a hidden 10-foot-long alligator—is sure evidence of that truth.

Parker also knows that people’s imaginations can sometimes run away with them at night, taking them in bad directions. And that’s exactly what he tells his friend Devin when the nerdy teen calls him one foggy evening near midnight.

Devin, it seems, saw a ghost. Well, Parker’s sure it wasn’t a ghost, but Devin thought it was. He saw a faceless figure, holding some kind of green, glowing (radioactive?) thing, float out of a neighbor’s empty rental property. And he decided to jump out his own window and follow it.

No matter how Parker tried to coax Devin to give up on the chase and go back home, Devin refused. He just kept going and going. And even when he finally promised to turn around, and the two teen boys signed off from each other, Devin must have kept going. For the next morning … Devin Catsakis was found dead, down by the old, flooded stone quarry.

To say this horrible event was upsetting for the port town of Rockport, Massachusetts, would be an understatement. There had already been rumors swirling around about that ghostly figure and its property-smashing ways. And now the “ghost” had seemingly contributed to a murder. Online speculations and eerie reports were even negatively impacting rentals in the vacation-focused town.

Parker’s good friend Ella and her grandmother rely totally on the income from their rental home. And if things keep going the way they are, they might lose everything.

Ella and Grams are both pretty superstitious, and they’re both convinced that something dark and ghostly is smashing around in the night and killing young boys. When the “sea-smoke” rolls in (as Grams calls the fog) evil rolls with it. How do you fight that?

Parker, however, is convinced that in the deep, thick fog and behind its green, glowing presence, there’s something flesh-and-blood hiding. There’s a mystery hiding, too. A mystery that must be solved.

Parker’s grandfather reminded him of the message of Ecclesiastes 12:14— “For God will bring every deed into judgment, including every hidden thing, whether it is good or evil.”

And that’s exactly what Parker is counting on.

There is no question that Parker and his mom and dad are Christian. And while the mystery here proves to be a very corporeal one and not the ghostly one that many expect, there is still quite a bit of faith and prayer in the story mix. The Buckman family all take steps to help those in need. And that includes praying for others, for the town in general and for themselves as a family.

Ella’s grandmother (Grams) gives Ella a family heirloom cross to wear. There is a sense of faith connected to the necklace, but it’s more a faith in its “protective powers” rather than a faith in God. In fact, Grams is fully convinced (and in turn Ella is too, to a degree) that evil spirits of some form are creating chaos and harm around them.

Ella openly doubts God’s justice, thanks in part to some experiences in the past with racial prejudice. But as she and Parker talk and work together, Ella’s opinions about God shift.

As mentioned, there are discussions about ghosts and evil entities. Gram believes that the thick fog that regularly rolls into town is a portent of the “Angel of Death.”

Several neighbors pull together to help those in need amid the chaos in Rockport. They give physical and financial aid. Chief among them are Parker’s mom and dad. They are portrayed as loving parents and people more than willing to give of their time and energy to aid others. We never meet him, but a deceased father of a local teen is reported to be a good and caring dad who gave his son valuable and life-shaping time.

Others in the town, including a local banker and a local businessman, are not so giving and helpful. In fact, they are part of a plot to hurt people. A local police chief is also portrayed as a hard-edged man who finds it difficult to deviate from preconceived notions.

Ella and Grams form a loving family—Grams raising Ella since she was abandoned as an infant. They’re Black, and it’s pointed out that some have not wanted them in the predominantly white town. Grams talks of some who shunned her and her husband in their youth simply because of their race. She also points to a particular white friend who went to lengths to be a good friend and help them buy a home that others would not sell them. (The story speaks strongly in favor of loving friendship and against prejudicial attitudes.)

A couple local teens, Scorza and Harley, add to the turmoil as they attempt to hinder Parker and get Ella to turn away from him. (One of the guys has a crush on her.)

There are repeated encouragements in the story to live an upright and honest life in earnest service to others. Parker declares “telling someone a half-truth was pretty much like telling them a lie.” We also see Parker’s upright choices change the negative attitudes of another teen. Those earnest choices also make him a person that people are drawn to.

A teen is drowned in a cold-blooded act of murder. We don’t see it happen, but we do see the same individual attempt to cause the death of two other teen boys. The boys are bound together and forced under-water with nearly empty diving tanks. Through perilous moments and heroic actions, the boys survive. Sharp diving knives are part of the action as well as the threat of a gun.

An adult and some teens break into people’s homes and smash furniture in an attempt to frighten people. One individual wakes a family in the dead of night and terrorizes them verbally. We also learn that this person has no compunction over killing another if he feels it even remotely beneficial.

Harley lives with his uncle who is an obvious alcoholic. As such, their relationship is strained and we see the uncle steal from and misuse the boy. We later hear that Harley’s beloved dad died in a car crash, hit by a drunk driver. Harley violently refuses to even consider drinking.

Parker’s longtime-friend Jelly (from Book One in the series) shows up here, too. And it’s pretty clear that both she and Ella have a serious crush on Parker. (Though he seems fairly oblivious to the attraction beyond their solid value as friends.) The girls are a little jealous of each other at first, but eventually become good friends.

Harley has a crush on Ella and he ham-fistedly attempts to grab her attention while jealously trying to thwart Parker. Eventually, however, the teen realizes that he can help Ella through selfless acts and thereby earn her friendship.

Have you ever witnessed other doing bad things or making poor choices? Have you tried to do something about it? What do you think someone should or can even do in a case like that?

Have you ever gone out of your way to selflessly help someone else? What does the Bible say about that? What about the idea of doing good for those who you might think of as enemies?

Every Hidden Thing is an action adventure/mystery that at times can feel a bit intense for younger readers. But the read is brisk and thought-provoking and it upholds the sort of virtuous and honest actions that Christian parents hope to instill.