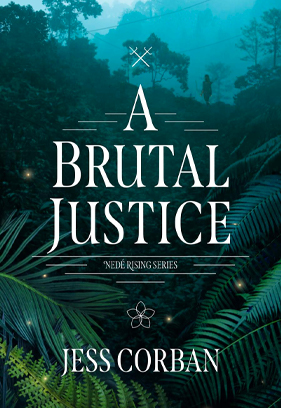 The realm of Nedé has a new apprentice Matriarch. And teen Reina Pierce can now stop worrying about her grandmother, Matriarch Teera, and her domineering demands and get on with some semblance of life. But can she live with the violent secrets she’s learned from her grandmother’s past? Can she really ignore the forceable “Gentling” of all men? Or must she do what her heart tells her is right?

Nedé has a new apprentice Matriarch. And though the next in line for that ruling position will be a woman named Jamara—a terrible, brutish individual whom pretty much nobody can stand—for Reina Pierce, this woman’s ascension comes as almost a relief. That’s because it won’t be her in that position. Reina had been forced to be a candidate in the Matriarch-replacing program, but she was thankfully passed over for the job. Phew!

Now she can put the domineering demands of her grandmother, the current Matriarch, behind her. And that should also mean that Reina can become part of the Alexia: a group of powerful, leather-clad young women who ride sleek black horses and keep the peace with swords and arrows. That warrior’s life won’t be easy by any stretch; but compared to the painful quagmire of her grandmother’s power-driven world, it’ll seem like a vacation.

First, there’s the fact that during the candidate program, Reina was forced by her grandmother to kill someone very dear to her. And that death is the most painful thing she’s ever had to endure.

The second weight Reina bears, however, is nearly as heavy. She learned a horrible secret in the midst of the candidate program. She always thought that the “Gentle” men in the world—those fragile individuals who serve and care for the women in their female-ruled society—came naturally by their roles. But Reina found out that isn’t true. Those men are all forced into their weakened, servile state by a female hierarchy that has chosen to chemically alter the DNA of every male child just after birth.

It’s a horrible injustice that most women don’t realize is actually happening. Yes, the Brutes that men used to be (and that some whisper still live on the outskirts of civilization) were horrible beasts who perpetrated violence against women. But is this systemic injustice against men any better?

More importantly for Reina, however, is the question: Can she stay quiet and live with that ugly truth? She’s actually met some of the Brutes living in the Jungles outside the city (another secret she’s kept). And though some were terrible … others were kind. And one young Brute, named Rohan, makes Reina think and feel strange things that women no longer deal with in the asexual world of Nedé.

Reina Pierce is a young woman at odds with herself and with everything she’s ever known. She knows she must make some kind of decision—soon! But the truth is, if she follows her heart, she’s not sure what she’ll even do.

Nedé is home to a secular society, but there are occasional references to God. The first book in this series, A Gentle Tyranny, references Reina’s mother, Leda’s adherence to an ancient faith and a book of scriptures. And here Leda reveals that she’s been bringing male babies to the Brutes in the jungle so they can “grow up as God intended.”

Reina and others use the phrase “I hope to Siyah …” in their conversations. This refers to a legend focused on the very first Alexia, a woman who gained nearly godlike status among that female society. There are also occasional references to an afterlife. A friend of Reina’s says, for instance, “If they kill us in our sleep, Rei, I’ll track your butt down in the afterlife and kill you again.” After her horse’s death, Reina wonders if people and horses go to “the same place.”

Reina and several Brutes explore the ruins of some old pyramids. And someone notes that several areas look as if they were designed for sacrificing enemies, to “rip out his heart or something.”

With the addition of the secreted-away tribe of Brutes, there are women and men in roles of authority this time around. Reina’s mom and grandmother are on opposite poles in the community of women. Leda is kind and caring. She works—and has done so for many years—to save the lives of baby boys and keep them from being “vaccinated” and transformed into feeble slaves. Matriarch Teera, however, is ruthless. Somewhere down deep she believes that her choices are for the better of the female-dominated society at large, but most of her actions are designed to simply maintain her power. And her choices are generally deadly, for both the Brutes and the brave female Alexia.

On the other hand, a large muscular man named Torvus, the Brute’s leader, is something of a contradiction all on his own. He’s more than happy to kill and destroy in order to protect his young male charges. On the other hand, he loves Leda dearly and is willing to go out of his way to protect the lives of any women he deems innocent.

The Brutes give voice to their guiding principal: “Brawn without control makes you an animal.” And Reina compares that to the Nedéan motto, “Power without virtue is tyranny,” realizing that in a large sense the two opposing group are reaching for the same earnest values. “Which one of us—women or Brutes—have the more virtue?” she wonders.

People also discuss the loss of life amid conflict. “The loss of any life, however justified, carries weight,” an unexpected person states. And someone else muses that “every person deserves the chance at their fullest life—even those that could hurt us.”

Forgiveness in the heat of conflict is discussed as something vital in life, too. “To withhold forgiveness is like drinking poison and expecting the other to die,” someone wisely says. And conversely “where forgiveness grows, new paths appear.” Those sorts of sentiments drive Reina to seek forgiveness—and a less deadly path—even when it seems almost impossible to do so.

Members of the Brute group also talk about the honor of doing what’s right, even when a situation seems hopeless. “A woman once taught me that true strength is shown in sacrificing for the greater good,” someone says. With all the discussion of honor and virtue in one form or another on both sides, the story concludes that “love is the greatest virtue.”

No alcohol or drug use, and no foul language. But Reina does favor the phrase “What the bats?” as her interjection of choice.

As opposing warriors clash in several battles—the powerful and well-equipped female forces, and the much smaller group of more massive and hardened men—there is quite a bit of bloody mayhem on display. The described clashes aren’t overly gory, but we do hear of some sixty or so deaths and lots of bloody wounds. People get bashed with clubs, hit with arrows and projectiles, and slashed at with swords and spears. One central character is hit with a thrown knife. As she bleeds heavily, it appears she might die.

There are broken and protruding bones in the mix. And a horse grows sick and dies in an emotional scene.

We find out that Leda and Torvus were once lovers and had a child together. And Leda decided that in spite of her great love for Torvus, living their lives apart would help save the most innocent lives. Eventually they reunite and embrace and kiss, expressing their tender, undying love for each another. Reina begins developing those kinds of loving feelings for Rohan, even though they are very foreign feelings that she’s hesitant to indulge. Eventually they touch, hold hands, embrace and then gently kiss.

Even Reina’s rough-edged friend Bri starts to warm up to the Brutes once she gets to know them. She and another young Brute touch hands, giving Reina the sense that they’re getting close.

What do you think is Reina’s greatest strength? Can you see some of your own traits in her or in some of the other characters? What would you have done differently in their situation? How does the Bible say we should deal with conflicts involving violence against others or with injustice in our world?

How do you think Jesus might deal with some of the same problems we see here? What would He do in our day-to-day world?

What was your favorite part of this book?

As with the first book, A Brutal Justice explores the evil of governmental overreach and injustice, and it raises questions about social and gender prejudices. And this series conclusion also wrestles with ideas of war, honor and forgiveness. It’s a well-written adventure that’ll potentially lead young readers to think about a number of cultural and social issues in their real world.