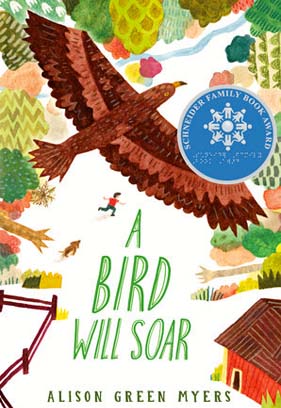 When it comes to bald eagles, there’s an unfortunate reality of life you need to understand: “Eagles don’t return for fallen young.” That’s why when Axel finds an injured eaglet on the ground after a terrible storm, he knows he needs to rescue it. Axel relates to the young bird; his own father shares that eagle’s lack of sentimentality. But when Axel catches glimpses of the eagle parents in the area the following weeks, he wonders if birds of a feather really do flock together—and whether they might be better parents than he thought.

Axel’s a huge birder. He’s read through A. P. Brown’s Collection of North American Birds more than enough times to prove it. He can tell you that young turkeys follow their moms everywhere, Peregrine falcons can dive at speeds near 200 miles per hour and pigeons can do backflips.

Axel thinks his own mother, Byrd, is like an osprey—known for being great mothers. His father, Frank, is more like a bald eagle. Both he and the birds love focusing on building their large homes.

Though Byrd and Axel don’t always get along, Axel knows that his mother loves him very much. When it comes to his father, however, Axel’s not quite so sure. After all, after his parents separated, Frank was supposed to come and visit every other week. He didn’t keep to that schedule for long. And then, one day, he just stopped coming entirely. And Axel doesn’t know why.

Axel believes that his father is like a bald eagle in more ways than one. That’s why when a tornado causes a bald eagle’s nest to come plummeting to the ground with an injured eaglet inside, Axel quickly sets off to rescue the baby bird. Because—apparently like his father—eagles don’t return for fallen young.

Axel’s neighbor Emmett makes the sign of the cross. Another neighbor, Nance, is said to have stopped going to church due to her old age—though she still prays. Other characters pray in the book, too. Dr. Martin, a woman who rehabilitates birds, references going to church.

Frank is out of the picture for much of the book, causing Axel to wonder if it’s because his father doesn’t like him. It is said that Frank was always a good father to Axel, but after multiple tragedies struck the family, Frank took to heavy drinking to try to numb the pain. When Frank returns later in the book, he genuinely tries to reconnect with Axel, and he makes it clear that he loves his son and regrets his past mistakes.

Byrd does her best to raise Axel. However, Axel is often frustrated with her because he believes that she does not trust him. In part, this is true: Axel is on the autism spectrum, and Byrd isn’t always sure what things he can handle on his own. Because of this, the two occasionally have light arguments regarding trust—though it is clear that they love each other.

Axel has other adults who serve as positive role models for him to follow. His neighbors, George and Emmett, are like family to him. The school guidance counselor, Ms. Dale, helps Axel to untangle his jumbled feelings and put them into words. There’s also Dr. Martin, who also has autism, and she frequently reassures Axel in his moments of uncertainty, always pointing him back to hope.

A large part of A Bird Will Soar is based around secrets and mystery—two things that Axel does not like. Many of these secrets are because Axel’s authority figures have chosen to keep them from him to protect him, much to his irritation. Axel and his various guardians learn over time to not keep secrets from one another, and they grow closer as a family unit as a result.

Very mild language is used, with a couple uses of “heck” and a few uses of “crap.”

A tornado tears through the countryside, causing a tree to crash through Axel’s house. An eagle is said to have been hit by a truck and gone through rehabilitation. Dr. Martin references being hit by a car when she was younger. Byrd mentions that she had a miscarriage. Axel scrapes up his leg after tripping on the eagle’s nest.

Axel’s father was once an alcoholic, and he crashed his car while driving while inebriated. Though a dinner party usually includes wine, Axel notes that none has been set out when his father is attending.

George’s dog, Ray, urinates on the fallen tree inside Axel’s house. Ray breaks his ribs while chasing a squirrel. A character talks about eagle poop.

George and Emmett are an older gay couple who live together and are prominently featured in the story. George kisses Emmett’s cheek. A gender-neutral title is used to describe a teacher at Axel’s school (Mx.).

Axel often runs when he feels hurt by other people. Is this wise to do? What could Axel try doing instead?

Axel struggles with understanding what it means to be part of a family. What do you think a family is? Does family have to be related to you, or can a family be made up of close friends, too?

As many of the characters in the book reveal, sometimes it’s hard to understand the emotions inside us. Even adults struggle with this at times. As Frank says in the book, “Emotions can get jumbled up, like those trees behind the barn.” Have you ever felt this way before? How did you deal with feeling like that? What can you do when you aren’t sure what your feelings mean? What should you not do?

Read Ruth 2:12 and Psalm 91:4. Cardinal fathers will provide for and protect their young even after their children have left the nest. How does this make you view God when He calls Himself your Heavenly Father? Based on these verses, what do you think it means to take refuge under God’s wings?

A Bird Will Soar explores family through a plethora of bird facts. As a boy wondering why his father left their home, Axel can’t help but compare his relationships to how birds act. To him, it might just be that his father abandoned him like eagles don’t return for a lost eaglet.

But regardless of whether that’s true, Axel learns an important lesson: family doesn’t have to be related by blood. He and his mother receive plenty of love and support from neighbors and other friends who stick closer than many blood relatives have. Author Alison Green Myers teaches us that families are made of people showing one another unconditional love—even in the midst of our mistakes and secrets.

Parents will want to be aware that some of those loving members, however, include an older homosexual couple. There’s a reference to drunk driving in a character’s past. Additionally, Axel’s tendency to run away from things that upset him may require parents to explain why that’s not the appropriate option.