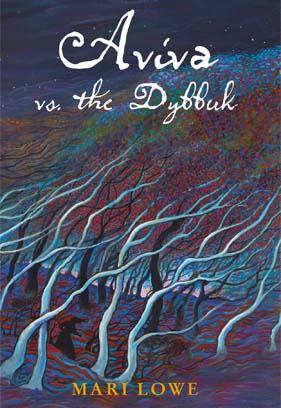 Aviva’s life has been difficult since her father died—especially with a dybbuk haunting the mikvah where her mom works. With the help of her friends, Aviva will have to confront the past and find a way to drive away what’s been haunting her.

Aviva deals with the past by ignoring it. Ever since her father died, she and her mom have lived in a tiny apartment above the mikvah (a pool used for religious purposes in Judaism), where her mom works. With her mom too distant and depressed to continue teaching, the job of running the mikvah falls to Aviva, and it is a blessing.

What isn’t a blessing is the dybbuk, or ghost, that haunts the mikvah.

He looks like an ordinary boy, but he’s constantly getting into mischief. Aviva is the only one who can see him, so she’s the one always cleaning up his messes.

At school, Aviva faces different struggles. Though she’s attended the same Jewish school her whole life, she has no friends. Her classmates always seem to be annoyed with her, and their annoyance only escalates when they learn the Bas Mitzvah Bash at the arcade will be a mother-daughter event for their class instead of a father-daughter event, presumably because Aviva doesn’t have a father to bring.

The only time Aviva isn’t the object of her classmates’ scorn is when she’s playing machanayim, a ball game played at some Jewish schools. Aviva is one of the best in her class at the game, but so is her former best friend, Kayla.

One day, Aviva and Kayla’s play gets too intense and results in an injury to one of their classmates. Both are banned from trying out for the machanayim team, and as additional punishment, they have to work together to come up with an idea to get their class excited about the Bas Mitzvah Bash.

That punishment, though, might help the girls patch up their friendship. They bond over the dybbuk and the secret door they find in the mikvah pool. They investigate the door when the pool is being drained, but the pool starts to fill before they can get back out the door. They manage to escape down the tunnel behind the door and discover it leads them into the shul.

Their adventure inspires a spooky mystery game for the bash, and the principal approves their idea. However, Aviva’s troubles are far from over.

After the shul is vandalized and Aviva ventures inside, she is forced to finally confront the past and the hard truth: there has never been a dybbuk.

Aviva is Jewish, so many Jewish beliefs, traditions and folklore are mentioned.

Much of the story focuses on the dybbuk, which in Jewish folklore is a ghost who has come back to complete a certain task.

Aviva’s mom loves her, but she is distant and depressed for much of the story. In the end, she finds the strength to begin moving past her grief.

Aviva’s teachers are firm but fair. They eventually rally around her and her mom and help them in their relationship with each other and the community.

A swastika is drawn on wet cement, and people vandalize the shul.

A man attacks Aviva in the tunnel under the shul, and she hits back, thinking he’s the dybbuk. He threatens to kill her, but she escapes.

Aviva’s dad was killed by a car after a group of teenagers attacked him for being Jewish.

Aviva and Kayla talk about getting their periods and how married women go to the mikvah once a month after their periods to be made holy again.

What are important qualities for good friends to have?

Read Proverbs 17:17 (NIrV). What should friends do when bad things happen?

What makes you a good friend? What are two ways you could be a better friend?

Do you know anyone who might be lonely? How could you be a friend to that person?

Aviva Vs. the Dybbuk deals with difficult topics like antisemitism, violence and depression, which might be too mature for some readers. However, the themes of friendship and community are redemptive and ultimately offer hope.