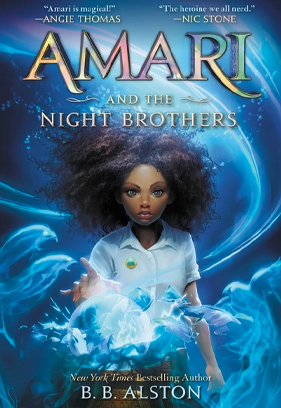 Twelve-year-old Amari is super worried about her missing older brother, Quinton. On top of that, she loses her school scholarship that covers a tuition her mom can’t afford to pay. But then she receives a mysterious package—sent from Quinton himself—that invites her to spend the summer at … a magical training camp!

Amari Peters knows she’s not the only kid who’s ever been bullied for being Black and poor. And she’s usually wise enough to take her mom’s advice and step away from conflict when she is. But on this particular day in the halls of Jefferson Academy—a fancy rich kid’s school that Amari can only attend thanks to a special scholarship—she isn’t in the mood to step away.

Her brother, Quinton, has been inexplicably missing for weeks now, and Amari is incredibly worried. So when a snooty girl named Emily gets up in Amari’s face, again, and starts goading her that Quinton is probably dead, Amari snaps and pushes Emily down. Nobody gets hurt. But Amari’s mom gets called to the principal’s office. Because of the school’s no tolerance policy for violence … Amari loses her scholarship.

Mom kinda understands Amari’s actions, even though she’s disappointed. Even the principal understands. Being bullied is terrible. But rules are rules. Now, Amari faces a summer worrying over where she’ll be going to school next fall. Not to mention a summer being worried while grounded! And, of course, Quinton is still missing too—the biggest issue of all.

Out of the blue, though, something completely unexpected happens. A mysterious little guy show’s up at Amari’s door with the news that Amari’s brother sent her a briefcase holding something called a Broaden Your Horizons kit. And it’s in the closet in Quinton’s room.

Of course, anybody with half a brain would start wondering how someone could deliver a briefcase to someone’s bedroom closet! But that’s the least of Amari’s concerns at the moment. That briefcase is from Quinton! How ever it got here, it’s got to be something important. And indeed, it is. Inside the briefcase is an odd little green and purple-striped suit in Amari’s size, a pair of strange message shades, and an invitation.

It seems that Quinton—the smartest smart person that Amari has ever known—has given his brainy-but-sometimes-hard-nosed little sister an invitation to a special summer camp. But this is no ordinary camp with canoe rides and campfires. Nope. It’s a magical training camp hosted by the Bureau of Supernatural Affairs (whatever that is). And not only is Amari invited to this bizarre gathering, but her mom is instantly made to believe that it’s all a part of the same leadership program Quinton attended and that helped him gain full-ride scholarships to Ivy League colleges.

So, before you can say “Expecto Patronum!” Amari is ungrounded and on her way to a place that shouldn’t exist, where news of her brother awaits. And her eyes are suddenly opened to all the trolls, sphinxes, ghosts and mermaids that have been unseen all around her. In fact, Amari finds out that the Bureau of Supernatural Affairs is a secret organization that monitors and manages all those spectacular creatures. And she is being recruited as a trainee.

It’s all kind of crazy.

Add in the fact that Amari will be rooming with a were-dragon, and has her own set of hidden magical powers, and things start getting really crazy.

Everything you might consider to be part of a realm of the supernatural is very much alive and at play in this tale. Much like in the movie Men in Black, it’s hidden and disguised all around us in the real world in an effort to keep ordinary human panic to a minimum. That collection of magical, mythical, mystical beasties includes fairies, witches, ghosts, unicorns, Yetis, talking inanimate objects, etc. There’s also lots of supernatural evil in the world. Magicians, for instance, are powerful magic wielders considered to be the bane of peaceful existence in this tale. (The most infamous magicians, the dreaded Night Brothers, even transformed themselves into vampires so that they can drink the blood of others and live on their magical essence.)

The young cadets who show up at the magical training camp also gain special supernatural abilities through a magical gem that Merlin the magician gave to the supernatural bureau. Those powers range from the ability to turn invisible or be imbued with superhuman athleticism, to the ability to manipulate electronic devices. And we see several uses of these special powers in the course of various tasks and challenges.

It turns out that Amari has a magician’s magic flowing in her blood, which makes her “perhaps the most magical person who ever existed.” This causes waves of fear and distrust in others. But since she appears to be a natural-born magician—something very rare and powerful—the Bureau of Supernatural Affairs isn’t quite sure how to deal with her. Some ponder the question of whether she can use her skills for good or whether she’s destined to be evil.

Amari meets with the director of the Bureau’s “Department of Good Fortunes and Bad Omens,” and he takes her up into the sky to read her past and future through the “spirits of the stars.” The reading uses stardust to form images of her past (the tribal queens and warriors she is descended from) and her future (which involves images of snakes). The director mentions that “greatness, like all other traits, can be passed down in the blood, from parent to child.” Amari and friends also attend a festival run by ghosts who man various booths and attractions.

Amari mentions her “loser dad” who ditched her mother and left her to raise Amari and Quinton alone. But more than anything else, that reference serves to amplify the fact of Amari’s love and respect for her hard-working, ever-supportive mom. Mom understands the frustrations Amari feels when it comes to racial and social tensions at school, but she always holds Amari accountable for her actions and encourages her to rise above the fray. Mom wants Amari to find the kind of college and career that will help her be successful and happy.

When it’s discovered that Amari has a dense concentration of magic in her blood, there are a number of other cadets and some adults in leadership at the Bureau of Supernatural Affairs who don’t trust her and even take steps to cause her to fail.

The story draws clear, thoughtful parallels between its magic world and our real world. It symbolically points to how some can irrationally react in negative, hurtful ways against others. Some at Jefferson Academy, for instance, bully Amari because she’s Black and poor. And in the magical training sessions, she has to endure the disdain of others simply because she has magician’s magic in her blood. The book motivates young readers to recognize and stand against different types of prejudice. It also encourages victims of prejudice not to push back in angry, destructive ways.

Most of the agents and instructors at the training facility are understanding and helpful. We also see how Amari’s older brother, Quinton, has not only become something of a hero at the agency, but also used his skills and abilities to encourage and help others. We see flashbacks of him nudging his “Amari-Amazing” sister. And we hear of ways, in their Rosewood low-income housing neighborhood, that Quinton had helped local kids. Jayden, one of those locals, slips back into relationships with some gang members when Quinton goes missing. But because of that past supportive connection with Quinton, Amari is able to persuade Jayden to get back to making healthier choices.

There is no foul language here, nor do we see any drug use. That said, it’s implied Jayden may be involved with some gang-related drug trafficking. And Amari tells a story of hearing her drunken father say mean things about her (doubting her paternity). One of the senior officials in the agency states that the large hotel they use as a front sells “killer cigars.”

Many threats from powerful magicians and deadly monsters emerge throughout the story, and some battles filled with hitting and punching. And though there are perilous situations with roaring monsters, things never get too intense. We hear of large, magically created hybrid creatures (such as half-human, half-tiger beasts and enormous rhino warriors) attacking the agency and people’s homes. And we’re told that a number of people die. (Though physical attacks are never described in detail.)

Some people get hurt in the course of the story, but there are also magical healers who give aid. Magical attacks zap foes, as well as picking people up and moving them around. One supernatural attack forces someone to relive their worst fear.

Amari finds herself in several physical altercations, but none are overly harmful.

Amari and another teen named Dylan grow close. And it looks as if they may grow closer as they hold hands. But the connection never goes any further than that. It’s implied, however, that a male and female agent have a romantic relationship. (Amari goes to one agent’s door seeking help and finds the other one there.)

What did you think of the magical world that Amari finds herself in? Do you think the author was using that world and its magic to help us think about real things in our world?

There are times in the story where people didn’t treat Amari very nicely. What did you think about those scenes? Have you witnessed anything like that at school or been treated that way yourself? What did you do? What should we all do when we see someone hurt or treated badly?

What did you like best about Amari? Are there things about her and choices she makes that you would want to imitate?

What do you think the story said about the importance of family? And what was it saying about helping others? Are there things you can do that might help a friend or neighbor?

Author B.B. Alston weaves a magic-filled tale that very much feels like a youthful cross between Harry Potter books and the movie Men in Black. In fact, there’s a planned film adaptation of this book (and the others in the to-be-released trilogy) already in the works. That alone will likely draw the interest of some young readers.

This book’s broad fantasy approach can certainly be used to introduce kids to the negative impact of bullying, prejudice and racism. And transversely, it can encourage young readers to help others. However, parents should keep in mind that there is a lot of magic in this mix, and that subject matter may require extra discussion and explanation.