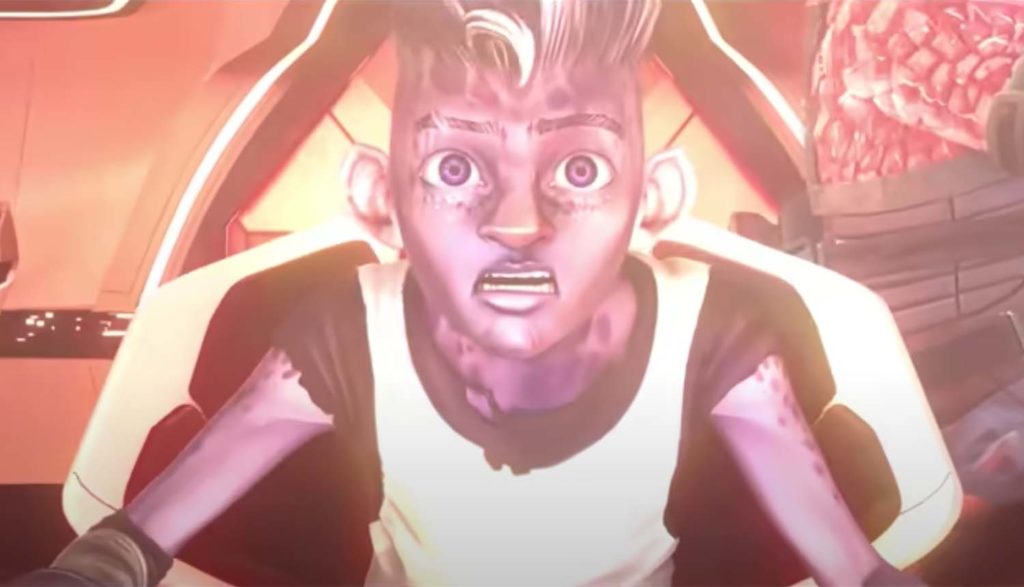 Dal is an alien prisoner trapped in a subspace mine deep in the Delta Quadrant of the galaxy. He and the other captives are forced to labor for the “Diviner,” a mysterious figure searching the mine for … something.

Here, the United Federation of Planets has no power (they’re nearly 70,000 light-years away in the Alpha Quadrant). Universal translators are banned in order to prevent prisoners from talking and possibly organizing an uprising.

And if you should step a toe out of line, the Diviner has an army of robots led by his second-in-command, Drednok, to inflict punishment on the offenders.

So, when it’s suspected that Dal knows something about an escaped prisoner, “Fugitive Zero,” he’s given a choice: help capture Zero or die a painful death.

Dal agrees to find Zero. But things don’t go according to plan. Instead of discovering Zero, Dal runs across an abandoned Starship, the USS Protostar.

New plan: Rally a few prisoners to help fix the Protostar up and escape the mines!

But as it turns out, escaping is the easy part.

Because the Protostar is exactly what the Diviner was looking for, and he’s got some nefarious plans of his own for it. What’s more is that Zero, the Diviner’s most wanted fugitive, shows up wanting to join the newly-founded crew. And when the Diviner’s daughter, Gwyn, gets in their way, Dal and his new pals abduct her.

But with a little help from the ship’s hologram—one Kathryn Janeway of the USS Voyager—maybe, just maybe, Dal and his new crew will be able to escape the Delta Quadrant and return the Protostar to its home on Earth.

It’s been five years since the USS Voyager returned to Earth after accidentally being pulled to the Delta Quadrant in the events of Star Trek: Voyager. So how the USS Protostar got there is a bit of a mystery.

But this latest spinoff of the Star Trek series plans to unpack that mystery and introduce an entirely new generation of viewers to its universe.

Star Trek: Prodigy carries on the legacy of its predecessors, boldly going where no one has gone before. This computer-animated series features new characters (as well as a few old ones), new adventures and new alien species all targeted toward kids.

The makers seem to be mindful of the show’s intended audience, because there’s no language, no graphic violence and no sexual content of any kind. In fact, the only thing that might cause concern are the aliens themselves. Some look and act a bit rougher than others. And Zero is a Medusan—a noncorporeal, genderless, energy-based lifeform.

But otherwise, fans of the Star Trek franchise may discover that this is a good show to help introduce their kids to strange new worlds, new life and new civilizations.

After discovering a Federation ship, Dal recruits some fellow prisoners to help fix the vessel up and escape the mines where they’ve been forced to work.

Robots fire weapons at prisoners. We learn Zero was forced to torture prisoners for the Diviner. Drednok threatens to kill Dal several times. Several characters take tumbles while fighting and while trying to avoid falling rocks.

Characters lie and steal. We learn that the prisoners are all either criminals or orphans, kidnapped from the fringes of society. A man says Dal is a pain in the “tailbutt.”