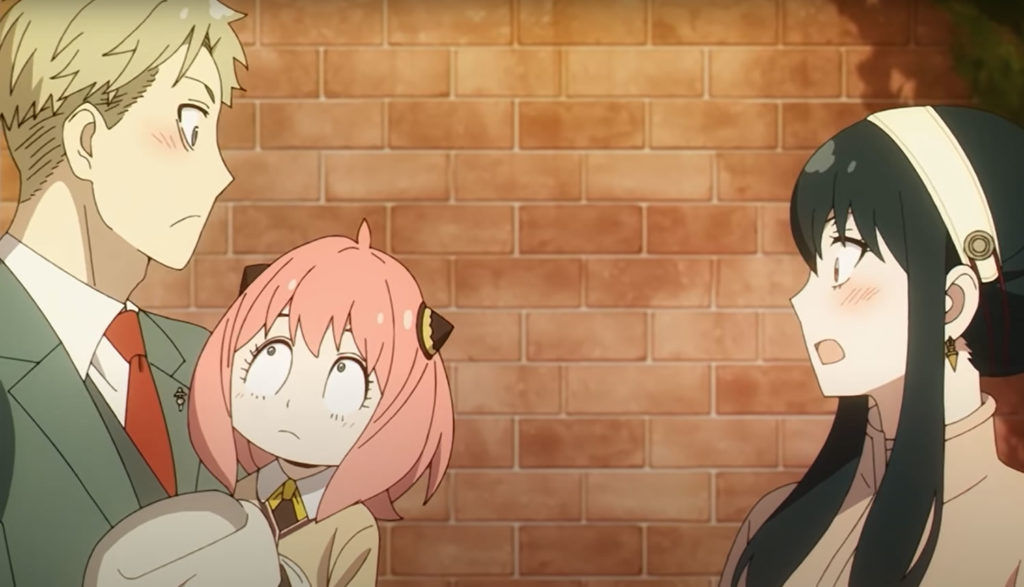 Donovan Desmond, the Ostanian National Unity Party Leader, is a paranoid man. And he’s on the brink of sending the nations of Westalis and Ostania to war. Westalis suspects it won’t be long before their fears about Donovan come true, so they’re sending their best spy, an agent known as Twilight, to Ostania to uncover any weaknesses or inconsistencies in Donovan’s stance and, hopefully, prevent a war.

The problem, however, is that because Donovan is cautious, he “only appears at social gatherings held at the elite private school his son attends.” For Twilight to get close to Donovan, he’s going to need to find a wife and child in order to enroll “his” kid into school and attend the gathering himself.

Now, you might think that these things would be quite difficult to do, but, as I said, Twilight is the best agent Westalis has. Under the pseudonym of “Loid Forger,” Twilight quickly manages to marry a woman named Yor and adopt a 6-year-old daughter named Anya. But Loid’s not the only one who’s intentionally hiding his secret mission from his “family.” As it turns out, Yor is a secret assassin, and Anya has the ability to read minds.

Once the mission ends, so does the family unit, as Loid will have to move on to other objectives. But as the three of them try to keep their true identities from one another, they’ll build a life with one another. And perhaps, when the mission finally comes to a close, the family won’t just be a means to an end.

Sure, the stakes are high. If Twilight fails in his mission, two major countries may go to war. But Spy x Family isn’t focused on that important detail (though stopping the event drives much of the plot). Instead, it centers on the familial relationship Twilight’s Loid Forger has with Yor and Anya.

Part of what makes Loid the best in the spy business is that he doesn’t get emotionally attached to anyone during his missions, breaking off his relationships as soon as they lose their value. But there’s just something about Yor and Anya that compels Loid to want to try a bit harder at being a better father and husband.

And what Anya wants more than anything is to be a part of a loving family. She’s been returned to the orphanage a few times now, and she’s trying so hard to be as good as she can be so that Loid succeeds in his mission, and she can maximize her time getting to have a mother and father. Who knows? Maybe her cuteness will wear Loid down, and he won’t send her away once he accomplishes his goals.

But this isn’t all about a makeshift family coming closer together. As Loid and Yor engage in their respective missions, viewers can expect violence and death as the two hack and slash their way through various goons and targets. People get shot, stabbed and punched (though blood only occasionally graces the screen). Mild language is used. For the majority of one episode, Yor is visibly intoxicated. In another, we see that Yor seems to have a sensual arousal regarding sharp objects, and a museum has a painting of a naked woman.

Spy x Family, though it has its violence, is actually a bit more light-hearted than one might expect. Its focus on the relationships of the Forger family leaves us with a primarily comedic story, even with the bodies of their slain enemies often collapsing on screen.

Secret agent Twilight is tasked with a new mission: take on the identity of Loid Forger, become a father and enroll his child into the prestigious Eden School in order to get closer to his elusive and paranoid target.

[Note: for clarity’s sake, all instances referring to “Twilight” will be referenced under his fake identity name—Loid Forger]

In the intro sequence, a tobacco stand is seen, and two people are seen drinking wine. Loid spits out his coffee. Loid fights assassins, knocking them out as one attempts to shoot him. Loid is seemingly knocked out with a metal pipe. Loid knocks many men out, and he faints. Loid breaks up with a woman after the two watch a couple get engaged.

Edgar, a rival of Loid’s, shoots and kills a man (though we don’t see any blood). A man smokes. A visibly intoxicated man runs an orphanage, and he calls Loid’s adopted daughter, Anya, a “creepy, disgusting little brat.” A car crashes and explodes after careening off a bridge, killing two men.

When Loid discovers that Eden School requires candidates to be married, he sets out to find a wife. It isn’t long before he finds Yor—but just like Loid, she has a dark secret.

Loid fights a large group of men as they shoot at him. Loid arrives to a party with blood dripping down his face. Yor, a secret assassin, kills bodyguards with knives, and we see their bodies on the ground with small amounts of blood. Loid and Yor knock men out, and they blow other assailants up with a grenade. Loid uses the pin of the grenade to propose to Yor. Yor wears a dress which exposes cleavage. Yor references a woman who was killed by a husband’s wife for pursuing him.

Franky, Loid’s informant, dresses up as a woman. A woman smokes a cigarette. Various women talk about their figures and short skirts attracting “creepy men.” A woman wants to put boogers in the police chief’s coffee. A woman makes a reference to prostitution. Adults drink wine.